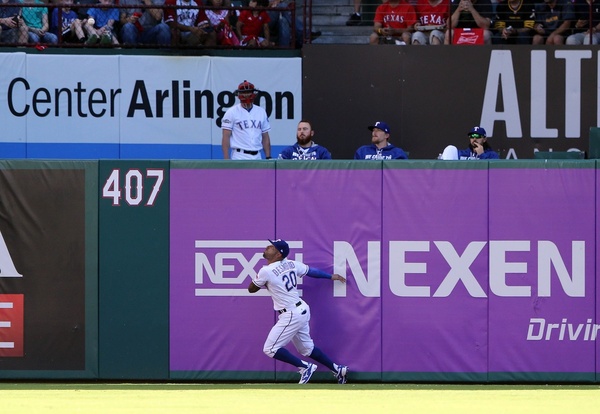 The Colorado Rockies have given a five-year, $70 million contract to a shortstop-turned-centre fielder who they claim is going to play a bunch at first base. Ian Desmond was a league average hitter against right-handed pitching in 2016, and he suuuuuuuucked in the second half. His 65 wRC+ from the All-Star break onward was worse than Michael Saunders’ 69 mark.

And they forfeited the 11th pick in the draft for the privilege!

OK, to be fair, in 2015 he had an awful first half and a second-half bounce-back (113 wRC+), but still! There are reasons to think he might be bad. Or at the very least not good enough to justify anything close to this kind of contract (and the 11th pick!).

Sure, he might be fine. He’s got some four-win years in his track record and put up a 3.3 WAR in 2016 (based on his first half and — like his other big WAR years — defence. And, as Drew notes, he’s durable, which is probably a plus for the oft-injured Rockies. But holy Jesus on a crotch, they’re talking about him playing first base!

The thing is, I’d love to be able to dismiss this and simply say that it’s the Rockies’ problem, but no. Five years and $70 million (and the 11th pick!) to Ian Desmond is now everybody’s damned problem.

Or perhaps it’s just the symptom that’s finally bringing our myopia about how much money is really out there into view (though perhaps the record-breaking reliever contracts that are due this winter should have tipped us off earlier). Which is to say: there’s a metric fuck-tonne of money out there, and things like Edwin Encarnacion not even being able to get teams to offer three years and $60 million (which we heard earlier here on Wednesday, though we’re also hearing talk of Mark Trumbo looking for 4/80M), or Dexter Fowler being gettable for four years and $60 million, now seem like quaint memories.

Maybe I’m wrong. Maybe this is a one-off and what’s on the table for Fowler, and the four years and $72 million he is reportedly seeking, hasn’t changed a whole lot. It’s just… the Rockies — even the Rockies — aren’t just giving Ian Desmond $70 million over five years out of the goodness of their hearts or because they’re nice, round numbers. They had to outbid someone to get to that point, and if someone is out there willing to give anything close to that much for Desmond, they could have real influence on the market for a player like Fowler who’s actually, y’know, good.

That, indeed, seems to be what the Rockies are thinking too, as they’ve now got themselves a glut of outfielders to trade from. As noted above, they’re bizarrely claiming that Desmond will spend some time at first base, but that’s a terrible idea — and while we’ve seen quite clearly today that the Rockies aren’t entirely averse to terrible ideas, it seems more likely than not that even Desmond at first base is a bridge too far, and they’ll try to trade an outfielder like Charlie Blackmon or Carlos Gonzalez. Or maybe both (as Keith Law suggests in his latest skewering of the Rockies for ESPN.com).

So maybe that balances things out a bit? Maybe the teams competing with the Jays for Fowler’s signature start thinking they could nab one of those players instead. Or, shit, maybe the Jays do, too — though while everyone will salivate over Blackmon, I’d figure Gonzalez, with just a year left on his deal, and a $20 million salary the Rockies might be willing to eat some of for the right prospect package, probably looks better to the Jays than the higher cost of Blackmon after his breakout season (at age 30, it should probably be noted).

What I do know is that a world in which Ian Desmond is worth $70 million over five years, and the surrendering of the 11th overall pick, is a world in which Edwin Encarnacion doesn’t have to worry so much, not to mention one in which the complaints that the Jays could get him for cheap and aren’t don’t yet hold water, and in which Dexter Fowler should be paid quite a bit more than we were thinking and hoping.

How much more? I have no idea. The bigger question is, will “more” be enough to take the Jays out of the running for the coveted switch-hitting outfielder?

We haven’t heard anything to suggest that yet, but as the Rockies’ sudden emergence for Desmond indicates, the market is still pretty. And even if there aren’t mystery teams ready to jump in, the Cardinals and Rangers are still looking for an outfielder, as well as others.

All of which is to say, I am less hopeful that they’ll land him than I have been over the last couple of days, to be honest. Though I’m not quite at the convince-myself-Ben-Revere-isn’t-awful stage just yet. We shall see! (Cue Jays “fans” moaning that the Jays screwed up by waiting too long on Fowler, just like they screwed up by not waiting long enough on Encarnacion and moving too fast on Morales. WHY CAN’T THEY DIVINE THESE THINGS AHEAD OF TIME?).