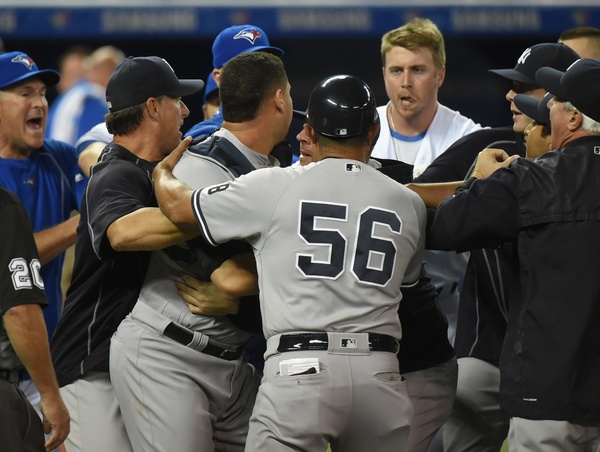 It is not remotely difficult to understand why the Blue Jays extended Justin Smoak at the time they did, you just have to actually think about it like you’re Blue Jays.

On the surface, sure, this is a real easy decision for fans to dislike. Giving money to a bad player we hate that could have otherwise gone to great players we love? It seems obvious that the deal is bad and that anybody who dislikes it is no mere lemon-sucking halfwit, they might even be downright rational!

Everybody ends up feeling pretty good, sneering at a front office they’ve been conditioned from the get-go to be suspicious of and an owner most of them already hate because of a decade-and-a-half of running the team on the far-too-cheap (plus the fact that so many also pay the company exorbitant fees for cell phones and Wi-Fi and cable TV packages — assuming cable TV still exists — every month).

There isn’t, then, a whole lot of incentive to get bogged down contemplating internal logic. That will only lead us to places that undermine our comfy disdain.

But of course there was internal logic to the move. Figuring out what it was isn’t very difficult, either.

Smoak is obviously not a major piece, nor is he paid like one. He’s getting part-time, or even backup money. He’ll make $4.125 million in each of the next two seasons.

Did the Blue Jays have to sign him to that deal? No. They could have let him test free agency and probably got him on a one-year deal at about the same amount. Maybe even less — though I think that suggestion is dubious (Case in point: Mitch Moreland, a similar player who last week got $5.5 million to play for the Red Sox).

The thing is, had the Blue Jays not had Smoak, they would have had another hole to fill. They might have had to outbid the Red Sox for Moreland. They might have aimed higher and had to pay even more for someone like Chris Carter (though they wouldn’t have known he was going to be on the market). They could have targeted someone like Eric Thames, who went for a reasonable amount (but… uh… double Smoak’s entire contract) — though clearly they would have had competition from the Brewers, and it’s not like he’s anything close to a proven commodity.

Yes, yes, Smoak is proven, too — PROVEN TO BE BAD!

Ho ho ho, good one you dirty so-and-so! Glad to see that saying the dumbest, most negative thing one can think of still makes people think they pass as great wits!

But Smoak genuinely isn’t nothing. He’s not necessarily good, but he’s not nothing. No doubt you want a better player — you want the best players everywhere — but it’s not tough to visualize how he fits a roster like the Blue Jays’. Especially if you squint a bit.

One way you can do that is if you don’t link defensive and offensive value at a position in a traditional way — i.e. a first baseman has to hit this much at minimum, but we don’t care much about his glove; a third baseman has to have a glove this good, but he gets some leeway at the plate. Unbind yourself from those notions and think of Smoak and Josh Donaldson in tandem, for example. If instead of those two you had a player that gave you Donaldson’s glove at third base, but with Smoak’s bat, and Smoak’s glove at first base, but with Donaldson’s bat, things would maybe feel a bit more appropriate. Smoak’s bat still leaves you wanting, but not in the same way as it does with him as a first baseman. And if you consider the production you’ll get from Steve Pearce as Smoak’s platoon-mate, it looks even better still.

What you’re receiving from your corner infielders as a whole is still very good, you’re just getting there in a roundabout way — i.e. by having a shitty hitter as a first baseman (though, again, decidedly less so with Pearce in the equation).

Obviously Donaldson’s presence doesn’t mean you no longer have to worry about first base — you could get an even better first baseman and be even better off! — but this is a way to look at it that makes Smoak’s presence much less jarring. And his presence does other things, too: it raises the floor (bad as you think he is, Dan Johnson or Brad Glenn he is not), and it provides cost certainty, allowing the club to know more precisely how much payroll room they have to help get better players elsewhere. (The Blue Jays would likely also argue that his presence is good for the clubhouse, but I have nothing to suggest that it would or it wouldn’t).

Now, again, you’d really rather not have to delude yourself into thinking this way — you want to get a better player — but it’s at least workable. He’s at least going to give you an excellent glove at first base when he’s in there (an aspect of the game that’s been undervalued publicly over the years, but seems currently to be getting more consideration from front offices). And if he’s a bit below average at the plate for his position — his wRC+ against right-handers in 2016 was 99 and his career mark is 100; first basemen as a whole put up a 108 mark against RHP in 2016, and the median among the top 31 first basemen by plate appearances was 116 — you’re at least making up for it by the fact that you’re getting above or well-above average production at third base, shortstop, catcher, second base (assuming we’re talking about Devon Travis), etc. And if you’re able to add another legitimate everyday bat in a corner outfield spot, which will happen in part because of money saved by not having to pay more at first base than what you’re paying Pearce and Smoak, then you’ll likely be nicely above average there as well (or at least that’s the idea).

Simply having a player that’s workable for your roster is important. Cost certainty is important, too. Fans will huff about Smoak being paid money that could now be getting offered to Edwin Encarnacion or could have been offered to Dexter Fowler, but the more likely scenario was that having two 1B/DH spots to fill on the free agent market this winter was going to make front office members’ lives — and their ability to retain Edwin or sign Fowler — more difficult, not less. (And let’s be clear: the reason they don’t have Encarnacion isn’t Smoak, it’s Kendrys Morales; and the reason they have Kendrys Morales and not Edwin is Edwin and his agent. Teams don’t lock it multiple multi-year DH contracts back-to-back like fans pined for the Jays to do with Edwin after Morales was signed — especially, it seems, with first base defence a bigger consideration than it used to be).

It would not have been sound business to expect that they could go into free agency and get a bunch of bargains — and nobody seems to have operated that way (Edwin and his agent certainly didn’t see a market crash coming, and Jose Bautista very possibly wouldn’t have rejected the qualifying offer if he’d known then what he knows now, which would likely have taken the Jays out of the running for Edwin right there!). Maybe the Jays go into the winter thinking they will be able to rush a big money deal with Edwin, and then can wait out the market to fill the second spot and do OK, but that plan hardly guarantees that they’d do as well as getting Justin Smoak for Justin Smoak dollars.

This really is the whole trick to understanding the deal. The Jays could have had a worse player for less, but you obviously don’t want a worse player than Smoak. They could have had a better player for more, but they wouldn’t have known how much better or how much more until free agency began — and the “more” would have impacted what they could do elsewhere, while the “better” might not have been better enough to justify the “more.”

Or they could have just re-signed a workable player in Justin Smoak for workable dollars and avoided having to try to thread that needle altogether. (They then could have zeroed in on a guy like Pearce, who makes little money for the numbers he puts up, but hasn’t been nearly durable enough to hand an everyday gig to without… well… someone like Smoak behind him.)

So far nobody better than Smoak has signed for less than Smoak makes, and even if someone does, how much better and how much less? My suspicion, and I’d wager the Jays’ suspicion at the time they inked the extension, is that the answer to both those questions will be “not a whole lot.” Especially, again, if the value of first base defence truly is greater than we realize — as Smoak’s deal, the Moreland contract, the Brewers’ release of Carter (a poor defender), the Rockies’ bizarre claim they signed Ian Desmond to play at first base, and the seeming lack of National League interest in weak glove first basemen like Edwin Encarnacion and Mark Trumbo, may suggest.

I will grant you that this would be a better argument if the Jays had actually done something more significant with their money to this point. Or if Smoak wasn’t painfully fucking painful to watch at the end of the season. I mean, yes, if you think he’s pure replacement level at the plate, that first base defence doesn’t matter, and that whatever quad-A league-minimum guy you can scrounge up would be better, well… then you’re probably not going to be convinced by any argument.

But you’re also not quite giving Smoak quite enough credit. For example, here is a group of left-handed (or switch hitting) 1B/DH types (per FanGraphs’ leaderboards) who in 2016 hit as well as, or worse, against right-handed pitching than Smoak’s 99 wRC+ mark, in at least as many plate appearances as Smoak had:

No, they’re not players to build your team around, but they’re pieces. Workable pieces, not quad-A dreck — or at least some of them aren’t. And having a roster spot filled by someone workable at what’s roughly a market price is simply not nearly as bad as a whole lot of people want to think. It is, in fact, in these rather convoluted kind of ways, maybe actually good!*