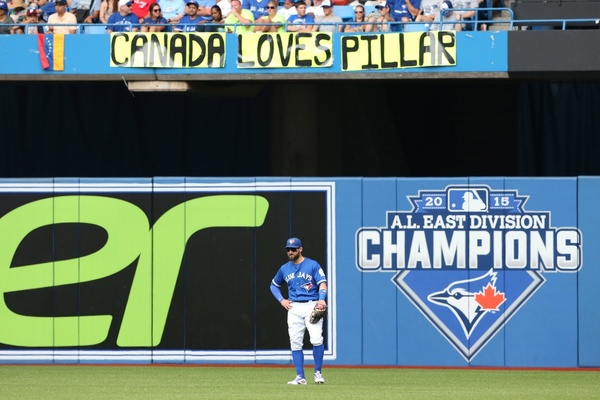 These are uneasy times for the Toronto Blue Jays.

Fans are getting restless. The fate of a national phenomenon hangs in the balance. And the knives, if they’re not quite out yet, are at least being sharpened in the media. By Scott Stinson in the National Post, Richard Griffin in the Toronto Star, Mike Passador at BP Toronto, and others.

The fruit, it hangs very low.

Don’t get me wrong, I’m guilty of it, too. For example, last week for Vice Sports I wrote about the relatively obstacle-free path towards a full scale rebuild that the Jays are currently on — one of a number of paths that 2017 could take, but one that, in their somewhat conservative approach to locking in long-term dollars this winter, they’re not explicitly avoiding.

Speaking of avoiding things, in that piece I made a point not to get into scare mongering about optics and the potential of Jose Bautista and Edwin Encarnacion landing elsewhere on the cheap. Oh, sure, it’s the horror scenario of the off-season, and it’s bound to get a whole lot of ink if it happens. But the cold reality is that franchise icons come and go — not often, but they do — and that the health of the franchise isn’t measured in how long they’re allowed to linger on in the uniform.

If the Blue Jays are a good team on the field in 2017, they’ll be successful at the gate, on TV, and as a brand. Fans will be understandably gutted at first, as they were last winter when David Price was allowed to go to the fucking Red Sox, but they’ll get over it. They’ll come back to the park.

If the Blue Jays are good.

The worry now, of course, is that they won’t be. A look at the outfield situation and the number of at-bats slated to go to someone like Justin Smoak doesn’t exactly bode well. But though the club’s recent reputation is built on offence, making the task of finding replacements for power bats like Bautista and Encarnacion seem especially daunting, fans shouldn’t sleep on run prevention — on how important it is, and how the Jays are poised to be as good as they were last year in that regard, or potentially even better.

The five NL playoff teams in 2016 — the Cubs, Nationals, Mets, Giants, and Dodgers — were the five teams with the fewest runs allowed in baseball. The top three run-preventing teams in the American League? Toronto, Cleveland, and Boston. Even the 2015 Jays, for all their offensive prowess, allowed the fifth fewest runs in the AL, with only three playoff teams and the Rays ahead of them. The trash Rangers and Orioles of this season buck the pattern, and… well… it’s not exactly coming up with the theory of relativity for me to say that keeping your opponent from scoring is good. And, yes, there are park and league effects that we need to be aware of when looking at the raw numbers. But it’s an interesting prism through which to view the Blue Jays’ somewhat strange efforts at team-building, and the way that the markets for guys like Bautista and Encarnacion have seemingly cratered.

You hear about how teams are copycats and you’ve seen it this winter with the way dollars have been handed out to relievers in the wake of the playoff successes of Andrew Miller, Aroldis Chapman, and bullpens around them. That was a big part of the Royals’ success, and their march to two straight World Series berths, including their I’m-not-sure-if-it-really-counts title in 2015. But so too was thinking about run prevention a bit differently than other teams maybe were.

Part of that had to do with the composition of their roster, and their park, and some of it is that I’m probably generalizing a bit too much here — again, it’s not like nobody has thought about this side of the game before. But take the lesson the Royals taught the league, take the way that the market is valuing its top sluggers — one who hinted a year ago that he was looking for a deal north of five years and $150 million, another who a little over a month ago reportedly had $80 million on the table — take the proliferation of Statcast data over the last two years, and it’s not so difficult to see that the public might just be quite a bit behind the curve.

I’m just thinking out loud here. Obviously teams still see value in guys who really shouldn’t carry a glove any longer. Carlos Beltran and Matt Holliday both received contracts this winter. And Kendrys Morales. These guys all still have places in the game. But when you add in the draft pick, it seems the equation goes too far sideways for most clubs’ taste. Maybe now more than it used to.

Maybe more than the agents for Encarnacion, Bautista, and Mark Trumbo realized it was going to. And the Jays, too. Otherwise they wouldn’t have made the four year, $80 million offer to Encarnacion in the first place, and wouldn’t have rushed to give away his roster spot before his market crumbled. Right?

Or maybe the Blue Jays saw this new world better than we sometimes give credit. Maybe in their view a DH really is only worth about what they’re paying Morales, and they made their offer to Edwin knowing he couldn’t possibly take it. And Smoak — like Mitch Moreland, who those savvy Red Sox acquired this month — has more value than fans understand. And that the part of the team that was most vital to keep intact, and to strengthen and invest in, wasn’t the vaunted offence but actually it’s ability to prevent runs. As they did with the $14 million committed to Francisco Liriano last summer, which never gets talked about as a reason why this off-season has been so hard, though they could have just kept Drew Hutchison and spent the money elsewhere (though that would have meant passing up on those two mid- to low-tier prospects they also got back).

We thought, or at least hoped, that the Liriano deal was a signal of the club’s growing financial clout, but maybe it signaled something else.

Look at the composition of the teams that had success in Cleveland during the late Shapiro era, and into this year (with a club that was largely built on his watch). Their top (qualified) hitter by wRC+ in both 2016 and 2013 was Carlos Santana, at 132 in each season. The top hitters on their 2007 playoff club were Grady Sizemore and Victor Martinez, both at 129.

The major reason for those numbers is the fact that power bats have tended to come at a premium, and Cleveland hasn’t been able to play in that pool. But perhaps in it a lesson has been learned. You can do a whole lot with elite run prevention.

With Martin and Tulo and Pillar up the middle, and Donaldson at third base, the Blue Jays have a real chance to be good in this regard again. And with their rotation — because as hard as it might be sometimes to believe that J.A. Happ and Marco Estrada are truly elite, or that Liriano really did rediscover something after moving here from Pittsburgh, there’s a whole lot to like about the rotation. For one, the Jays should more innings out of a potentially even better Aaron Sanchez in 2017. For two, Marcus Stroman had a stronger second half than a lot of people realize, and according to BP Toronto’s Joshua Howsam, is poised for a big breakout.

I’m stretching a bit, perhaps, to force a positive narrative on a team and an off-season a lot of people are ready to declare the front office has utterly and fucking irrevocably bungled — or at least will be once Encarnacion and Bautista land elsewhere. But maybe this really is a clearer picture of what they value. Maybe this goes some distance to explain Smoak and Upton and why they haven’t yet been placed on a raft and set adrift. Or why, with the outfield trade market as it is, and something resembling a viable replacement for Kevin Pillar in the form of Dalton Pompey (perhaps with Upton as a platoon mate), we haven’t heard the slightest whisper about the gold glover being moved.

That doesn’t mean a Pillar trade can’t have be talked about behind closed doors. And it doesn’t mean that they’re monolithic here, either. Maybe they did offer Edwin that money in good faith, and surely some of their decisions last year — moving out Ben Revere to let loose Michael Saunders or having a trade in place to flip Saunders for Jay Bruce — don’t quite fit the run-prevention-over-everything profile I’m trying to build here. But it’s part of the equation. Maybe a bigger part than we realize. And maybe thinking of it that way will help the rest of it make a little more sense.