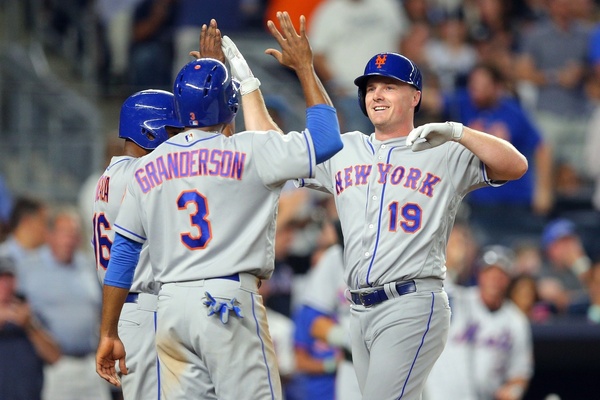 Ken Rosenthal wrote an interesting piece at Fox Sports here on Monday evening, explaining the Mets’ mess of an outfield, and how they’re going to have to find themselves either a full-time centre fielder, or at least somebody to platoon there with Juan Lagares (who was positively Pillar-esque against right-handers last year).

Yoenis Cespedes will be their left fielder, while in right they have Michael Conforto (who probably should be given the reins already), as well as Jay Brice (heard of him?) and Curtis Granderson.

Enter Rosenthal’s colleague Jon Morosi an hour or so later:

#BlueJays remain in talks with #Mets about acquiring Bruce or Granderson. Mets also trying to add a center fielder, per @Ken_Rosenthal.

Kevin Pillar, weak as the bat may be, wouldn’t be on the table for either of these mopes, but the Mets could have some use for Pompey — a switch-hitting centre fielder who has been stronger from the left side.

Would you trade all of that control of Pompey for a year of either of those guys? No. Would the Blue Jays? I don’t think so either — but maybe if the Mets ate enough of the cost (Bruce makes $13 million, Granderson $15 million, and they’re both free agents next winter) and/or sweetened the deal with something else. A reliever? A depth starter?

Maybe then you have something. If they like Pompey, and if the Jays don’t. And if they have the cash and the extra pieces — which… um… they probably don’t, and probably don’t. Rosenthal notes that the Mets are also looking add to their bullpen.

Rosenthal also notes that the Mets have some work to do here, and that they probably need to swing multiple deals. The Jays, then, wouldn’t be required to solve the Mets’ problem in one fell move. Maybe something smaller is better — Bruce or Granderson, plus their salary, for a whole lot of not much, perhaps? (Probably not ideal for the Mets!)

But OK, if they did manage to work something out, what even would they be getting?

People groan at the thought of Bruce — who the Jays almost “landed” last winter and whose name just won’t go away — but there’s something to like there. He hit 33 home runs in 2016, and maybe his power plays up in a park like the Rogers Centre. More importantly, he was good against right-handed pitching. He hit 27 of his home runs against right-handers, in just 381 plate appearances. His wRC+ in the split was 127, and while his on-base still isn’t stellar, his slash line of .262/.326/.546 against right-handers will certainly play — especially in a platoon with Melvin Upton Jr. (132 wRC+ against left-handers in 2016).

His outfield defence isn’t good, but he’s a durable player, and certainly wouldn’t be any worse than what the Jays have been running out in right field for the last two years.

Granderson is the better player in the overall. He hit 30 home runs in his own right, is a better defender, better on the bases, and doesn’t quite have the platoon splits that Bruce does. However, he was quite horrific against left-handers in 2015, rebounding to a 96 wRC+ in the split in 2016. He might be a platoon guy, too, in other words. And if you’re only looking at a guy to hit against right-handers, maybe Bruce, at the cheaper cost, is the better play.

Uh… but actually, know what might be an even better play?

Go with me on this, but… how about both?

I still don’t think it justifies giving up so many years of Pompey, and having to fill two outfield spots once again next winter. Nor do I think it would work at all for the Mets to get just a single player for their big league roster — a platoon player, at this stage, who isn’t even on the Jays’ big league roster! — out of both of these not-insignificant pieces. But other than what makes it crazy, think about it!

There’s talk that the Jays could still have as much as $30 million still left to play with; these guys add up to $28 million. Maybe the Mets pay some of that on account of all the years of control they’d be getting back, maybe not. However you work it out, the Mets  go into the season with an outfield of Cespedes – Pompey/Lagares – Conforto, and the Jays with Granderson – Pillar – Bruce/Upton.

Done and done. Fire up the video game, let’s give this one a try!

Or try something for real, even. Just… y’know… maybe not with Jay fucking Bruce coming back this way!

IIHF accidently tweets out Canadian Olympic roster, and it looks like Josh Ho-Sang is going to Beijing