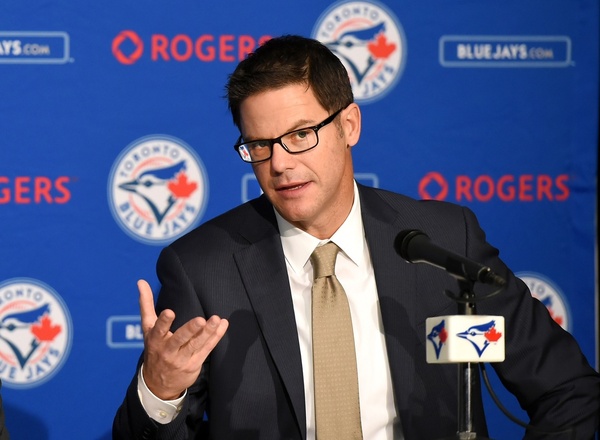 A whole lot of Blue Jays fans are understandably aghast that the club seems to have little interest in bringing back Jose Bautista and Edwin Encarnacion, despite the fact that we’re supposed to believe that they can now be had at bargain basement prices.

I’m not sure how much I buy yet that the two sluggers won’t still get their money, or something pretty close to it, but either of them going elsewhere for anything like a discount is going to be awfully difficult for fans to swallow.

Their big question will be a simple one: why?

The easy answer is draft picks, but it’s definitely more complicated than that. So let’s think about that a little…

Right now Bautista is projected by Steamer at FanGraphs to be worth 2.8 wins — perhaps a generous total given that he’s coming off a 1.4 WAR season. For Encarnacion it’s 2.4 wins, and maybe that seems a bit light on him. Edwin produced 3.9 wins in 2016, but the thing is, his season was actually something of a step in the wrong direction. His counting stats, like home runs and RBIs, were as big as he’s ever produced, but his ISO and SLG were down. His strikeout numbers are trending in the wrong direction, too — from a mere 62 in 2013, to 82, to 98, to 138 in 2016, and a jump to a 19.7% rate last year from 13.8% over the four seasons previous. And he will turn 34 in the first week of January.

Both players could certainly beat their projections, but projections are projections. They give us a nice baseline. And since I like my brushes with math to be of the quick and dirty variety, let’s just pick a round number and say we’re looking at 2.5 wins for each player in year one of their next contract.

Both players will be looking for something like $20 million per year. The rumour mill suggests Bautista will likely end up south of that, but that Edwin still probably has a chance to get it, or even a little more. For the sake of trying to work with round numbers we’ll just say that combined they’ll cost something like $40 million.

Five wins for that price? That’s pretty good! Last winter FanGraphs estimated that teams were paying about $8 million per WAR produced. Not only is this is exactly in line with that, but the Blue Jays’ situation — the need for near-term value, and the fact that these extra wins look like the might genuinely be the ones that cement them as true contenders — gives them extra value. It would justify overpaying these guys a little bit, even.

Unfortunately, this isn’t the whole equation.

Neither player, as far as anybody can tell, is looking yet for a one-year deal. That means another year on the books at the same price, but with less projected production. Usually the aging curve penalty is a half win per year. That takes us to nine wins total, and about $80 million.

That’s actually not too bad. Paying $8.89 million per win is still a pretty tidy piece of business, all things considered. Or, at least, all things we’ve considered so far considered.

Here’s where things get a little more tricky. Just based on what we’ve heard out of the rumour mill, it seems possible Bautista ends up with a two year deal, and that Edwin will get a longer one. Because of that, to keep things relatively simple, let’s choose at this point to focus just on Edwin.

It’s not as great, but dammit, it’s Edwin! Right? He’s a franchise icon, you buy a lot of goodwill with your fan base if you keep him, and you get those extra wins that just might be crucial to determining the success or failure of the 2017 version of this club. There’s a lot to like about this.

But here’s where the draft pick comes in.

Because of the way MLB’s collective bargaining agreement works, players’ salaries are artificially suppressed all the way from when they’re drafted through until they graduate the arbitration process and hit genuine free agency. In other words, teams get a whole lot of surplus value from drafted players that actually end up becoming good enough to play in the big leagues. Fans might scoff and say that these are mere lottery tickets not to be worried so much about, but the fact is that their value can be more or less quantified.

In 2014, Matthew Murphy of the Super Friendz Hardball times did an excellent job trying to do exactly that. I encourage you to read his work, but the gist of it for our purposes is that a pick in the 31-35 range of the draft — with as much as possible factored in, i.e. attrition rates, discounted value of future WAR, etc. — is worth about the same as one win, or just a hair above.

Murphy uses the Braves’ last-minute signing of Ervin Santana (out from under the Blue Jays, you’ll probably recall), as an example. Atlanta gave up pick number 29 in order to sign Santana, which by Murphy’s math means they lost just over $8 million in net value from the pick. He points out, however, that different models have different ways of discounting future WAR (which they do in the first place because immediate wins are more valuable to most clubs than wins down the road — though not, he points out, teams like the 2014 Astros or Cubs, who were trying to be bad). Murphy notes that Nate Silver did some work on this in 2005, and using the discount Silver went by the Braves’ pick would have been worth something more like $10 million.

So that’s a penalty that you’re paying on top of a contract with Edwin. You’re also losing out on about $2 million in draft bonus pool money, most or all of which would have likely gone to the player being selected with the relinquished pick anyway, but some of which could have been used later in the draft to go over slot and improve the club’s haul in the later rounds.

So, based on this very quick and very dirty math, on a three-year, $60 million contract with Encarnacion, the Jays are actually “paying” about $70 million for six projected wins. That’s $11.7 million per win, which is… not great. And that four-year, $80 million deal for seven wins looks even worse.

I mean, it’s not crazy far beyond what the market rate for a win is, but you can certainly spend your money more efficiently. Steve Pearce, for example, is projected for 1.5 WAR in 2017 and he’ll make just $6.25 million.

Hey, and for good measure, if we’re still talking only about the Edwin pipe dream, you’re now likely paying another penalty if you want to bring him back, in the shape of Justin Smoak’s sunk cost. So that makes it all that much more difficult to swallow.

Or if we’re talking about Bautista, the fact that you probably only want him on a two year deal (given that his projection is maybe too generous) makes the pick loom larger. Say he’s looking at two years and $35 million — the pick makes that more like a $45 million cost for his projected 4.5 wins. Still not ideal, albeit better.

Now, I’ll grant you that there are a whole lot of spots along the way here where my math may have gone sideways, or where you’ll be able to quibble. Edwin’s projection maybe does seem a bit light, and if you really believe in his ability to stave off more decline for another year or two, that’s going to change your equation (for example, if you think he dips to 3.5 wins in 2017 and apply the aging curve in the same way, that’s nine wins for $60 million plus the pick, which looks a whole lot better). Or maybe somewhere along a rather complicated line in the HBT’s attempt to quantify draft pick value there’s a misstep that changes the equation, too.

On the other hand, maybe Mark Shapiro and Ross Atkins, their situation being what it is (i.e. their prospect reserves depleted, their plans to make a fresh start being thwarted by the club’s 2015 success, and their ownership giving them extra rope because of it), discount future value even less than Silver did, throwing the equation out of whack in the other direction.

And yeah, their valuation of these draft picks is something that can certainly be argued with. Not the fact that they value them at all, which they obviously should, but the way they’re valued as part of the equation.

If the Jays’ internal equation looks anything like the one I’ve just worked my way towards, though, then you can maybe see why they’re behaving as they are (and why other teams aren’t biting yet on these players at these prices either). And if they really can be more efficient this winter — if they can really add more WAR by using fewer resources, like it seemed they might have been able to do had they landed Dexter Fowler for the right price — bully for them. I don’t want them handing aging players bad contracts out of sentimentality like they’re the Phillies.

That said, if we’d seen more of that from this front office by now, it would have at least provided some cushion for what feels like the coming blow. As it stands, even armed with this attempt at understanding them, it’s going to bloody hurt. As sensible as they may be, some tidy equations aren’t going to save anybody. Dirty ones even less so.

But if you’re going to be aghast about it, it’s important to at least try to understand where the front office might be coming from, rather than setting them up in your mind as villains hellbent on ruining your summer and banishing players you love to far flung outposts through their sheer determination to make the 2017 Jays bad.

I can’t say that the Jays have these valuations right, or that they’ve played the market well so far. I can’t tell anybody that they shouldn’t be upset about how it feels like this is going down. But if it’s worth getting angry about, it’s worth actually thinking about — especially from the front office’s perspective.