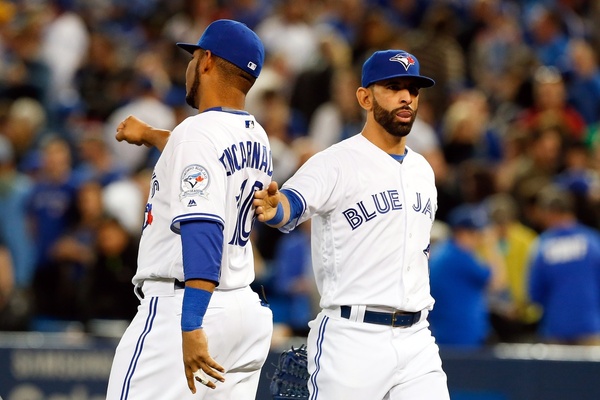 The agents for Jose Bautista and Edwin Encarnacion are getting a bit desperate, and would like to pit you and your emotions against the Blue Jays’ front office in an attempt to sway the club into becoming a more serious pursuer of their clients.

Or, at least, that’s the sense that I get after the last couple days of rumblings from the ol’ rumour mill.

Jon Morosi of Fox Sports pulled what a more cynical man than I might call an unseemly double on Tuesday, doing some straight-up P.R. work for Bautista and his agent by breaking some sure-to-make-fans-sympathetic “news” from their camp on Dean Blundell’s Fan 590 morning show — giving a nice shot of publicity to that regrettable enterprise.

That’s… nice? Or it would be if it wasn’t just two weeks ago that Nick Cafardo of the Boston Globe reported that the Red Sox were Jose’s first choice, and that “agent Jay Alou said Bautista was close to signing elsewhere, as early as this afternoon, but still held out hope that the Red Sox would change their minds.”

Or if there had ever been any indication that Bautista had a bone in his body that would be sympathetic to notions of a hometown discount or anything like it.

Or, y’know, if there wasn’t such obvious self-interest at play — not only in trying to leverage fan sympathy into maybe creating a market where there isn’t one, but in the fact that part of the reason Bautista might genuinely like the situation in Toronto so much is the fact that he can probably do better with endorsement money as the continuing icon of Canada’s Team than as some once-great veteran addition in Denver, or wherever he might land.

A Kendrys Morales doesn’t get to instantly become the face of Booster Juice.

It’s hard to blame them for trying to imply that Jays management is too focussed on the future, and the potential draft picks they’ll land when Bautista and Encarnacion land elsewhere. It’s a criticism that hits particularly hard against this front office because this team made the ALCS, these were their players, and because of who they work for and the way that their tenure with the club got off so badly on the wrong foot.

Jose wants to be here and thinks the Jays have a good chance to win with him on the club, but the front office doesn’t think so and they really want that draft pick is a message that’s going to resonate, even when it’s clear that nobody else is willing to meet his price and give up a pick to sign him either.

Jon Heyman was on Blundell’s show on Wednesday morning with a similar message about both Bautista and Encarnacion.

Again, a more cynical person than I might look at all this — and at Morosi’s piece last week explaining why Bautista returning to the Blue Jays makes the most sense for both sides — with a bit of a raised eyebrow concerning how the information game is played. Reporters with tremendous access and sources making public what an agent clearly wants to be made public.

And then there’s TSN’s Rick Westhead, who on Wednesday tweeted that he’s hearing that the Jays’ payroll is expected to be about $165 million.

Westhead was the reporter that in early November told us Encarnacion was looking for a five-year, $125 million deal, and then later that month passed along word from Edwin’s agent, Paul Kinzer, that he expected a deal to be done sometime at or before the Winter Meetings, and that the Blue Jays were “showing Edwin the most love.”

Those things might have been true, especially if you consider the $80 million offer to have been the Jays’ big show of love, even if by then it was off the table. And so might this latest report of the payroll number. But it all sure happens to serve the interests of the agents — either with information that might have baited clubs into making bigger, bolder, more immediate offers, or with information that suggests budget space isn’t the obstacle that’s keeping the Jays from reuniting with their sluggers.

In concert with the stuff coming from Bautista’s camp, it reinforces the perception of the Jays’ front office chasing off success for the sake of prospects and payroll savings.

Especially so when you have Kinzer himself going on the radio today and giving the not-quite-sob-story of Edwin’s offseason, telling the audience that the realization is starting to sink in for Edwin “that he probably won’t be a Blue Jay.”

Yet again, a more cynical writer than I might suggest that an agent doesn’t book a radio hit just because he likes to chat. And that a writer who has had a line to said agent in the past reporting that same day that the Jays ought to have plenty of payroll space to accommodate his marquee client is maybe a bit curious.

But again there’s clearly a bit of truth in all this, too. There’s a reason the message resonates.

The Jays do value the draft picks they stand to gain when Bautista and Encarnacion sign elsewhere, and they certainly should have enough payroll room to fit in at least one of them — right now they’re at about $140 million: $127.6 million, according to Cot’s (though that number is a little high because Melvin Upton is listed incorrectly at $5 million), plus $7.5 million in arbitration projections (per MLBTR), with about $5 million more needed for pre-arb players.

They could bring back one of these two, make their roster a whole lot better than it is right now, and probably get themselves a bargain in the process — and that’s immensely frustrating for fans, understandably.

But I guess what I’d say is that, as satisfying as it might be to swallow the agents’ picture of the world, I’d caution against it. There’s a reason these players haven’t signed yet, and it’s not only the Jays who are refusing to budge or reluctant to give up a draft pick.

As the agents get desperate, we see the game being played around us, with us, and through us, whether we like it or not.