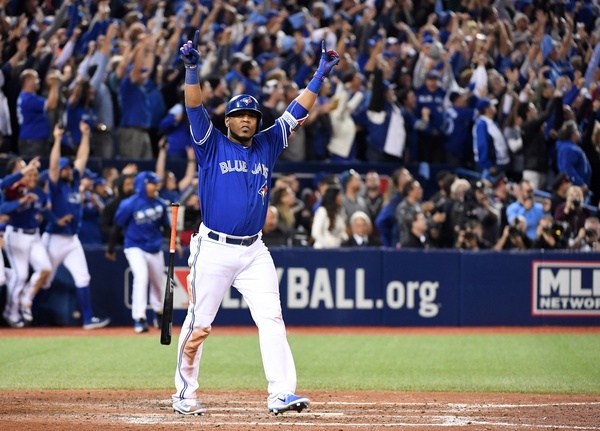 And here we have it — or here Jon Heyman has it: Edwin Encarnacion will play in Cleveland next season.

It’s a three year deal for $60 million, with an option for a fourth year with a $5 million buyout — so $65 million in total, as confirmed by Jeff Passan. A great move for Cleveland, a great fit for that team (and for keeping Edwin out of the hands of the fucking Red Sox or Yankees), and a gut punch for the Blue Jays and their fans.

The Blue Jays should be the team giving him this money. Plain and simple.

It’s very easy to say that the Blue Jays’ front office badly misplayed their hand should have waited out Edwin. Clearly they did and they should have! But those are results, and what we’re really talking about is process.

Once Encarnacion rejected their four-year, $80 million offer just before free agency opened — believing, like literally everyone at the time, that more money was out there for him — the Jays felt they needed to act quickly. And they did so on Kendrys Morales and on Steve Pearce.

The question fans are asking, and have been for weeks, is “Why?” Why did they feel they had to move that fast? Why on those guys?

For me, the answer is not so much because they just really happen to love those two players, but because they felt they liked those players at those prices and that they needed to make sure they got something.

They had the dollars, they had Edwin’s value right, but what they didn’t have was the luxury to believe they were going to be able pass on those players and still get what they needed elsewhere.

Maybe that’s wrong. They sure have managed to pass on a whole lot of other things just fine. But with this franchise it always feels like things would be different if they were done better by financially, and this is no different.

Despite the grand successes of the last two seasons, and the enormous size of their market and their TV base, and their AL-leading attendance numbers last year, the Blue Jays do not yet feel they can operate like a club that has the financial clout to outbid rivals. Sure, they may have a reasonably healthy budget approved for 2017, but beyond that who knows what they’ll be able to sell ownership on? And when it comes to this stuff, that’s a problem. Because of it they can’t fearlessly make potentially dubious financial commitments in order to ensure that they land the players they really want when they want — the way that St. Louis did with Dexter Fowler, for example. Or the way Boston blew all other suitors out of the water last winter for David Price.

They’re avoiding the big risk and chasing small value — not necessarily for value’s sake, like I think a lot of people want to believe, but because that’s the way they have to do business. (And, frankly, the way smart teams do business.)

As it was, waiting out the Encarnacion market would have meant sitting on their hands though a great deal of player movement on the chance that they might have been able to sign him. A chance that seemed, at the time the decision needed to be made, to be pretty small.

It was not remotely unreasonable to have thought then that waiting until this point meant a high likelihood of ending up with no Edwin, no Morales, no Pearce, and not a whole lot of good alternatives left to consider.

Of course, that’s not what happened.

Now fans badly want to blame the front office, but you just… you kinda can’t. Or at least I can’t.

When Cleveland signs a premier free agent on a discount something profoundly fucked up has taken place, and it’s not just the Blue Jays, but all of the teams wealthier than Cleveland — i.e. basically all of them — that have missed out.

I know people are going to say I’m being too easy on the front office here, and I’ll even admit that I do try to be sympathetic to their point of view, maybe sometimes even too much, if only because so many frothing fucking maniacs with zero interest in thinking for any longer than the time it takes them to grunt out “Shatkins” like it’s clever won’t. But I really do think Rogers is the root of the problem, and a whole bunch of the rest of the problem is a matter of getting some seriously ugly-ass results from some hard-to-argue-with process.

On the Rogers front, had the Jays been allowed to act richer than, say, the Baltimore fucking Orioles, as they damn well are and ought to, this has a chance of ending differently. But you’re sure as hell not being allowed to act like that when Edwin Encarnacion is trying his best to fall into your lap and your budget isn’t flexible enough to eat what’s left on Justin Smoak’s contract to make it happen. You’re sure as hell not acting like that when you’re so concerned about the lost surplus value of a draft pick that you can’t pull the trigger and be confident you’ll just make up for the loss with dollars later. And you’re sure as hell not acting like that when you’re rushing into Kendrys Morales’s arms out of fear that the market might slip away from you (unless you’re actually doing that because you think Morales is the better player, or Morales is the guy you have to take in order to get Lourdes Gurriel, who you really want, which… is a whole conspiratorial post in its own right).

And the fact that people are going to want to make this moment about only the front office screwing up makes it all the more important to me to make clear that “the Toronto Blue Jays” aren’t just one thing, and that what the front office does is directly related to what ownership lets it do, or what they fear they eventually won’t let them do.

I’m not saying that the Jays should behave recklessly or that the budget they do get isn’t healthy, but if you care about the how and the why of our getting to this shitty, unfortunate moment, I think this is it. Still.

Welp. The Blue Jays’ long national nightmare is finally getting set to begin. It’s 8 PM on Thursday night and the hot stove has started sizzling, as we keep hearing reports that Edwin Encarnacion is genuinely close to actually signing with a team.

Which team? We don’t know yet. But we know several that it won’t be. One of which is almost certainly your Toronto Blue Jays, though that hasn’t been ruled out entirely yet either.

Here’s what we do know:

And so here we are. Waiting. Get your Edwin’s departure thinkpieces ready!