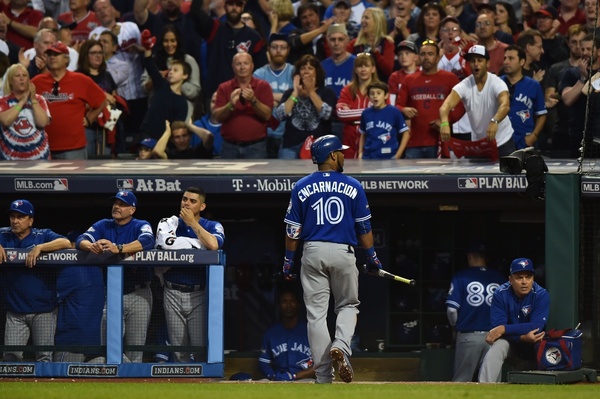 Merry Christmas, everyone! The Toronto Blue Jays-iverse has a tasty little gift for you this year. Spin!

On Thursday, in the wake of the devastatingly stupid failure of Paul Kinzer and the Blue Jays to bring Edwin Encarnacion back to the team he wanted to play for, we got Kinzer’s spin from Rick Westhead of TSN, as usual. And also from Rosie Dimanno of the Toronto Star.

Westhead wrote about the Jays’ $80 million offer to Edwin just before the free agency period began, and tells us that Edwin’s camp countered with a $100 million ask. He also gave us some talk about the differences between tax rates in Ohio and Toronto, and added, via tweet, that Edwin’s “agent says because of tax rates, Edwin could make as much ‘net’ in three years in Cleveland as he would have in four years in Toronto.”

I am worlds away from being an accountant, so I can’t say a whole lot about that, but I can say this: if you do the math, Kinzer’s claim is false based on the rates given in Westhead’s piece, even if you adjust the US federal tax rate down to where it’s claimed it might go under Donald Trump. And that’s before you even take into consideration that a Blue Jays player only makes about 45% of his income in Canada.

So… yeah… no. (Though I’m sure it’s a much more complicated question than this.)

And as for Rosie’s effort… maybe it’s not spin. I’m reading it again, or at least trying to — because Rosie’s insufferable prose reads like a 13-year-old’s conception of what a highfalutin adult might write like — and seeing less of that kind of thing than I originally thought.

Oh, don’t get me wrong, there’s a bunch of trash in there. A pointless swipe at analytics, for example. And several half-assed attempts at narrative, such as calling Shapiro and Atkins carpetbaggers (and “arrivistes,” ugh) who failed to understand the emotional connection Edwin had with the fans (a terrible reason to sign a baseball player, but a great foundation for a hit piece!), and playing up the idea that the Jays’ contract talks with Edwin in March were “insulting.”

“They could have sewn up his future fealty. But the braintrust of Mark Shapiro and Ross Atkins, cleaving to the false idol of analytics, tried a gambit so disrespectful to a proud man that Encarnacion shut down any further discussion for the rest of the year,” she writes.

No, seriously, she wrote that. And they printed it in the Toronto Star! And the whole thing is like that!!

In that passage Rosie is talking about the “insulting” two-year contract offer that the Jays made in March. Seems like it was probably pretty close to the three-year deal he ultimately, took, doesn’t it? And, as I wrote back in March, the idea of locking a big dollar, long-term aging slugger with a long list of injuries (including a finger problem and a hernia at the tail end of 2015), with a year still to go before he hit free agency was a risky proposition. The front office needed to see where the team, which already had a bunch of aging, big money veterans, was going, and where Edwin was going, too. That was always going to be reflected in the offer, and it almost certainly meant that waiting to negotiate in earnest until after the season was necessary.

Meanwhile, from Shi Davidi at Sportsnet, we have maybe a little bit of spin from the other side. Or at least what looks like it could be as much in certain places.

Shi gives us a fascinating and detailed timeline of the negotiations, including some new details — some of which are Blue Jays-friendly, and some that I’d imagine the team would prefer weren’t out there.

One is that we’re told that the “insulting” two-year offer from the Jays in the spring also included two option years and a reworking of Edwin’s 2016 salary. It still sounds wholly sensible to me.

Shi also says that the Jays’ first offer this winter was for four years and $70 million, which “didn’t move the needle.” He adds that there was no formal counter offer, but that soon after Edwin’s camp floated the notion that they were looking for five years and $125 million. And the reporter who got that scoop from Paul Kinzer? You guessed it — Frank Stallone. (Oh, wait, no, it was Rick Westhead.)

More interestingly, we’re told that the Jays were indeed talking still to Edwin’s camp after Kendrys Morales (who definitely had a lot of interest from other teams!) was signed, with the thought being that they could trade Justin Smoak to accommodate bringing it back. However, by then the $80 million deal was off the table. Fair enough, given the way his market was going, I guess? But then later we get this:

The Jays sign Steve Pearce and the “the Encarnacion camp is blindsided, as a meeting with the Blue Jays is scheduled for the next day.” Now, “with Morales and Pearce already on the roster, the only realistic scenario for the Blue Jays is a one, maybe a two-year deal.”

This is where I’d maybe grope around for an answer but I’m very much coming up empty. Plus, I’ve got Christmas shit to do! So I guess I’ll just leave it at this.

Hey, but at least we’ve got Jose Bautista potentially willing to sign a one-year deal (DO IT ALREADY!), and the Jays still considering (supposedly) blowing up their farm and going after Andrew McCutchen (which… just use dollars to get players, you dopes!).

So… there’s that. There’s at least that.