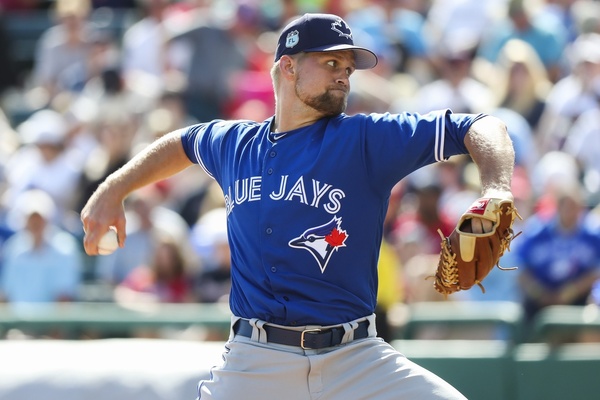 Glenn Sparkman was the Blue Jays’ selection in last December’s Rule Five draft, and since then nobody’s been able to type his name in a sentence without also mentioning Joe Biagini.

The hope from the Blue Jays had been that Sparkman might pull off the same feat as Biagini did last year, landing a role in the club’s bullpen for the entire season, and thus avoiding having to be offered back to the team he was selected from (per the… uh… Rule Five rules).

With the Jays having loaded up somewhat on uninspiring middle relief bodies, it didn’t look like a particularly easy task for him to even break camp with the club, let alone make it all the way through the season in the bullpen. So… good news!

Sparkman broke the thumb on his pitching hand today in what sounded like a rather gruesome incident during pitchers’ fielding practice, according to the way Ben Nicholson-Smith relayed it on this afternoon’s radio broadcast.

So if Sparkman isn’t ready to start the season — and with a broken thumb on his pitching thumb four weeks from Opening Day, it’s hard to see how he will be — the Jays are allowed to start him on the DL, then send him on a rehab assignment, before having to either add him to their roster or offer him back to the Kansas City Royals.

At the very least it should give them a little more time to let their bullpen situation develop. And with the bullpen-on-the-fly thing often dragging some volatility into April, that could definitely work to their advantage.

Ho ho ho. Nope, I have no idea what those other writers mean when they say sabermetrically inclined writers are in the tank for ownership. *COUGGGGGHHHH*

Hey, but regarding the particularities of Rule Five selections, don’t take my word for any of this. J.J. Cooper of Baseball America had a good explanation of Rule Five players and the DL back in 2015, in which he explained that there is a rule in place that prevents clubs from stashing Rule Five picks on the DL, but that it shouldn’t impact Sparkman much.

Rule Five picks have to be on a club’s active roster (i.e. not on the DL) for at least 90 days before they can become property that team. If Sparkman was on the Jays’ active roster for 89 days in 2017 and then got injured and shut down for the season, he would remain property of the Jays under Rule Five rules. In 2018 he would be treated again like a Rule Five player (i.e they’d have to offer him back to the Royals before sending him to the minors) because he didn’t meet the 90 day requirement.

In other other words, they can’t stash Sparkman on the DL forever and sidestep the Rule Five process, but he can start there and then go out on a rehab assignment for up to 30 days, like any other player.