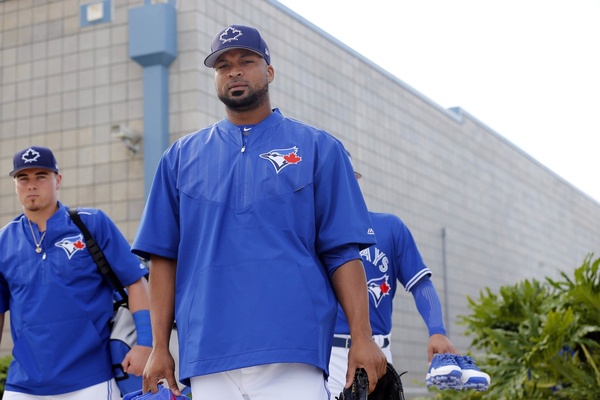 Francisco Liriano is ready to get shit done. Just look at that damn photo! Hell yeah. He’ll make his first start of 2017 today against something resembling the New York Yankees. And it’s on TV!

Surely you’ve seen it by now, but this winter’s Rule 5 pickup and Joe Biagini clone hopeful Glenn Sparkman broke his thumb during fielding practice yesterday. Stoeten covered it yesterday, if you haven’t read it, but I’ll summarize briefly. The Jays can’t stash Sparkman on the DL and keep him there until he officially becomes their property, but they can throw him there and have him rehab like a normal player. This is good, because it means the Jays won’t just randomly lose him for not having him make the 25-man roster out of camp due to injury.

#Bluejays news: Stroman starts Sunday before leaving for #WBC; Donaldson expected to play in Grapefruit League games, but not for a while.

Some quick player personnel news… Josh Donaldson seems to be progressing well, which is great, because the season pretty much goes to hell without him playing. And Marcus Stroman (and Jose Bautista though it isn’t mentioned in the tweet) are going to be leaving for the World Baseball Classic early next week. Let’s hope it doesn’t jinx the team like it did in 2013! Because that’s totally the reason 2013 was a gigantic cluster-fuck, seemingly-never-ending-pit-of-doom right?