By Paul Berthelot
1 year ago
For the first time this season, we have seen Vladimir Guerrero Jr. in a little bit of a rough patch.
Since hitting three home runs against Washington, Vlad has slumped to a .211/.375/.263 line with no home runs, and just a 79 wRC+. The struggles really began the series before Washington in Tampa Bay. In three games at the Trop, Vlad was just 1-for-11 with two walks and two strikeouts. Tampa had a very specific game plan on how to pitch to Vlad.

They clearly attacked Vlad up and in and down away. They did a good job at keeping the ball out of the middle of the plate where Vlad can do damage. When we last discussed Vlad I noted how he wasn’t chasing the pitch at the letters, and he still isn’t. The Rays tested him with lots of pitches up out of the zone, but Vlad wasn’t chasing. The Rays understood they can’t strike Vlad out so they had to get him out in the strike zone, and they did that by targeting the areas where Vlad does the least damage. 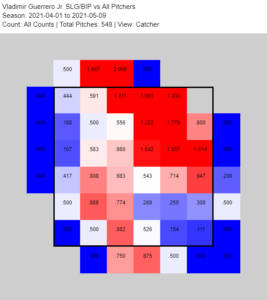 This is Vlad’s slugging percentage per ball in play. You can see he crushes the ball when it’s up and away. He struggles with the ball down and away and up and in. This is the book on Vlad right now. We saw Atlanta avoid this area, barely throwing anything in the upper third or above the zone. 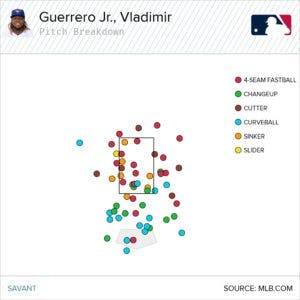 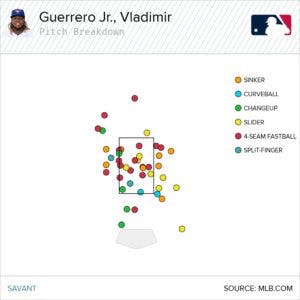 Both Atlanta and Houston took note of what Tampa did and adjusted. It’s not worth it to throw Vladdy anything above the belt, as he’s not going to chase those pitches. Atlanta avoided high pitches almost entirely, focusing on getting the ball down. The Astros kept the ball away from the top of the zone, and busted Vladdy inside. Guerrero Jr. to his credit wasn’t chasing and was taking his walks. He drew seven walks (one intentional) in these series.
The Athletics had a different plan of attack. They filled the strike zone and wouldn’t just give Vlad a free pass. Vlad had one walk in the four-game series and it was intentional. 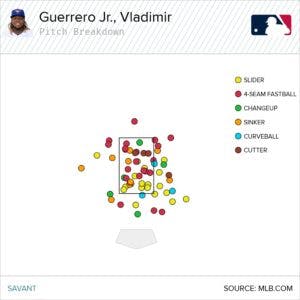 Oakland attacked the outside corner with sliders as you can see in that cluster of yellow dots. Vlad had five hits in the series but also struck out four times, something we are not accustomed to seeing from Vladdy. Vlad did hit two doubles in this series but that’s the only extra-base power we have seen from him outside of the three-homer game. That to me has been most noticeable with this stretch; we are not seeing Vlad drive the ball to the outfield as much, particularly to centre field. 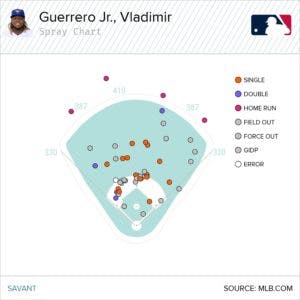 On the right is the first three weeks of the season, and on the left, we have from April 23rd (the start of the Tampa series) on. You have the three home runs Vlad hit against the Nationals, but other than that he has just two doubles and only five hits to the outfield. The hits to centre field have dried up and Guerrero Jr. is rolling over on balls and hitting it right to the shortstop.

Vlad’s fly ball rate has remained steady throughout the season. His recent struggles are directly related to the simple fact that he is hitting more groundballs and fewer line drives. The good news is that Vlad’s approach at the plate remains relatively unchanged. He’s not swinging wildly to try and get out of this. He is still hitting the ball hard, his contact rate remains high, and his swinging strike rate is consistent. He’s just being pitched differently and it’s up to him to recognize that and make the adjustment.
As the Blue Jays enter another series with Atlanta, we can see whether the Braves pitchers have the same game plan they did last time. Are they going to completely avoid the top part of the strike zone again, and pitch around Vlad? Or will they see what Oakland and Houston did and try to get Vlad out in the strike zone? It’s on Vlad to recognize how teams are pitching him, and to make the necessary adjustments. Given what we know about Vlad as a hitter and how he thinks the game, I don’t expect these struggles to last much longer.
Uncategorized
Recent articles from Paul Berthelot 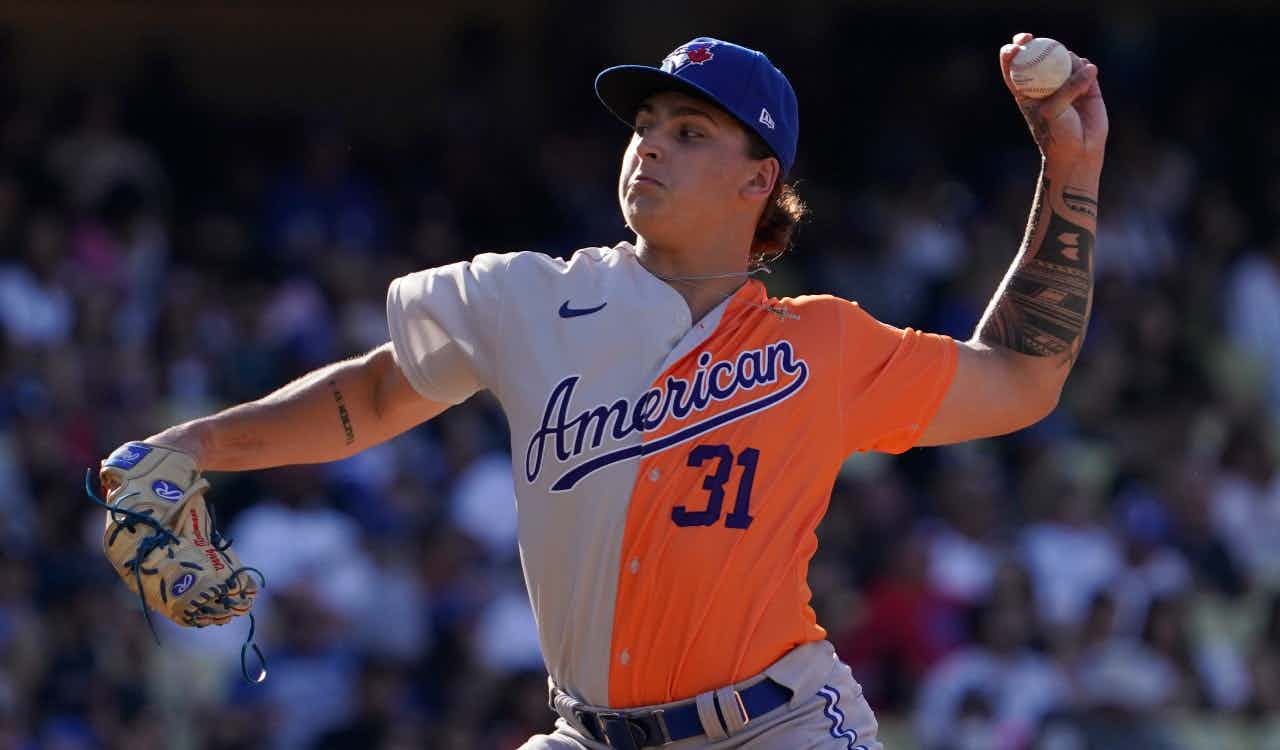