What the new shift rules can do for Cavan Biggio

By Tate Kispech
1 month ago
Baseball is changing. In 2023, shifts are no longer legal.
Teams now must have two infielders with their feet on the dirt on both sides of second base. This will do wonders for the players who are shifted often, and don’t do very well against it. One of these players is Cavan Biggio, who was shifted 82.8% of the time in 2022, according to Baseball Savant. So what does his future look like, in our new, shiftless universe?
40 of Cavan Biggio’s batted balls were pulled on the ground in 2022, good for 23%. He recorded a hit on a mere 6 of them, with only one being good for extra bases. Here’s one against a straight up defence, and maybe you’ll agree with my assessment that the official scoring of a double is…generous, as first baseman Bobby Dalbec ought to do better.
Here is one against the shift, but it’s really more of a line drive than a ground ball. It bounces for the first time right beside Terrin Vavra at second, who has absolutely no chance.
On the next one, Biggio taps one into the shift that Angels second baseman Luis Rengifo tries to flip over to first, but Biggio beats it by a half step. 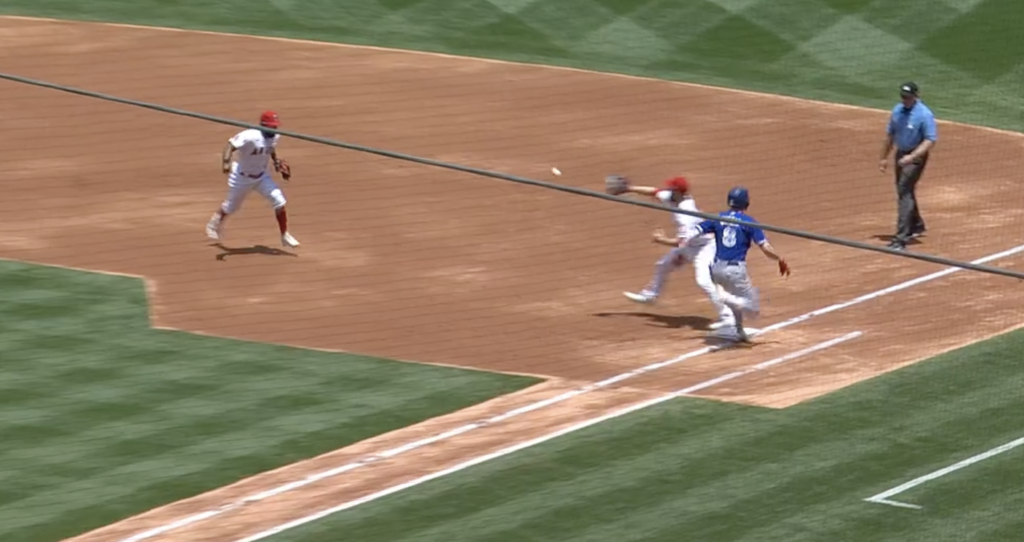 In totality, Biggio pulled 50 balls on the ground against the shift. Three of them turned into hits (6%). He pulled 12 balls on the ground against a straight up infield. Once again, three of them turned into hits (25%).
What’s perhaps more interesting, though, is how Biggio does when trying to go the opposite way. He actually doesn’t hit the ball on the ground very often when doing so. In 2022, he had a mere 5 batted balls that were on the ground the other way. Furthermore, he only had three line drives the other way. The issue lies in the popups. Biggio popped up to the opposite field EIGHT times in 2022. That’s as many times as line drives and ground balls combined. In my recent Alek Manoah article, I talked about how popups are nearly guaranteed outs, falling for hits less than 2% of the time. Biggio pops up a whopping 20% of the time he goes the other way. That’s an issue.
So, when Biggio pulls, he’s fairly successful, even against the shift. He batted .315 last year when pulling the ball against the shift, and .429 when pulling against a straight up defence (small sample size alert on that one though). When he goes opposite, he struggles massively, with a .200 BA against the shift, and a .333 with no shift (in three at-bats, to be fair). A lack of shifts in 2023 and beyond will give Biggio more authority to pull the ball, which is clearly what he’s better at doing.
Offence is only one side of the ball though. Let’s talk about something different. What will the shift do for Cavan Biggio as a defender?
At this point in his career, you know what Cavan Biggio will give you on defence. He plays a lot of positions solidly, even if he’s not always fantastic at any one. He’s still naturally a second baseman, and a move back to primarily 2B worked wonders for him in 2022. He racked up 7 OAA as a second baseman in 115 attempts, also tacking on another OAA in right field, in just 16 attempts. This plot displays Biggio’s average starting position in 2021 and 2022. 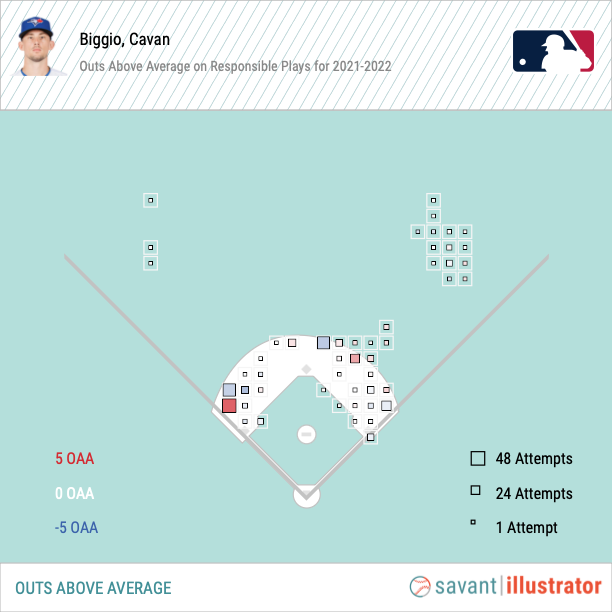 You can see what the shift has done for Biggio defensively. When he played more of a straight up second base, Biggio was at his best. When shaded up the middle, he really struggled. He was also not so great at playing in, and not so great when playing on the opposite side of second base. However, the lack of shift does hurt some of the versatility that Biggio offers. One of his strong suits is his ability to play the outfield, thus he slots in perfectly as a 4th outfielder with no troubles. Unfortunately, the days of the four man outfield are over.
Furthermore, Biggio’s weakness is his arm. His arm strength ranked in the 16th percentile in 2022, and he’s not a particularly accurate thrower of the baseball either. It hurts that he won’t be able to shade in one direction anymore. When the ball’s hit directly towards him, arm isn’t an issue. However, when Biggio has to move and field, that’s when he gets into trouble. Here’s one against the Astros, where Biggio’s playing first.
So although his arm may not be an issue without the shift, he loses some versatility due to the ban. Biggio’s forced to stick it out at one position, with no ability to be the 3rd infielder on either side, or be a fourth outfielder. He might not be exceptional at any one defensive position, so his value is hurt by an inability to shift.
At the end of the day, Biggio’s career has largely been defined by the shift thus far. More than 75% of his at-bats have come against the shift in his career, and the Jays were shifting about 50% of the time Biggio played the field. It’s hard to say exactly what changes will occur to Biggio’s play specifically, but it will be highly interesting to see how the rest of his career progresses.
Biggio’s been offered the potential to completely revamp who he is as a player, along with many others who’ve been defined by the shift for years. In 2023, we’ll get to see what he can do with that chance.
Thanks for reading! All stats via Baseball Savant.