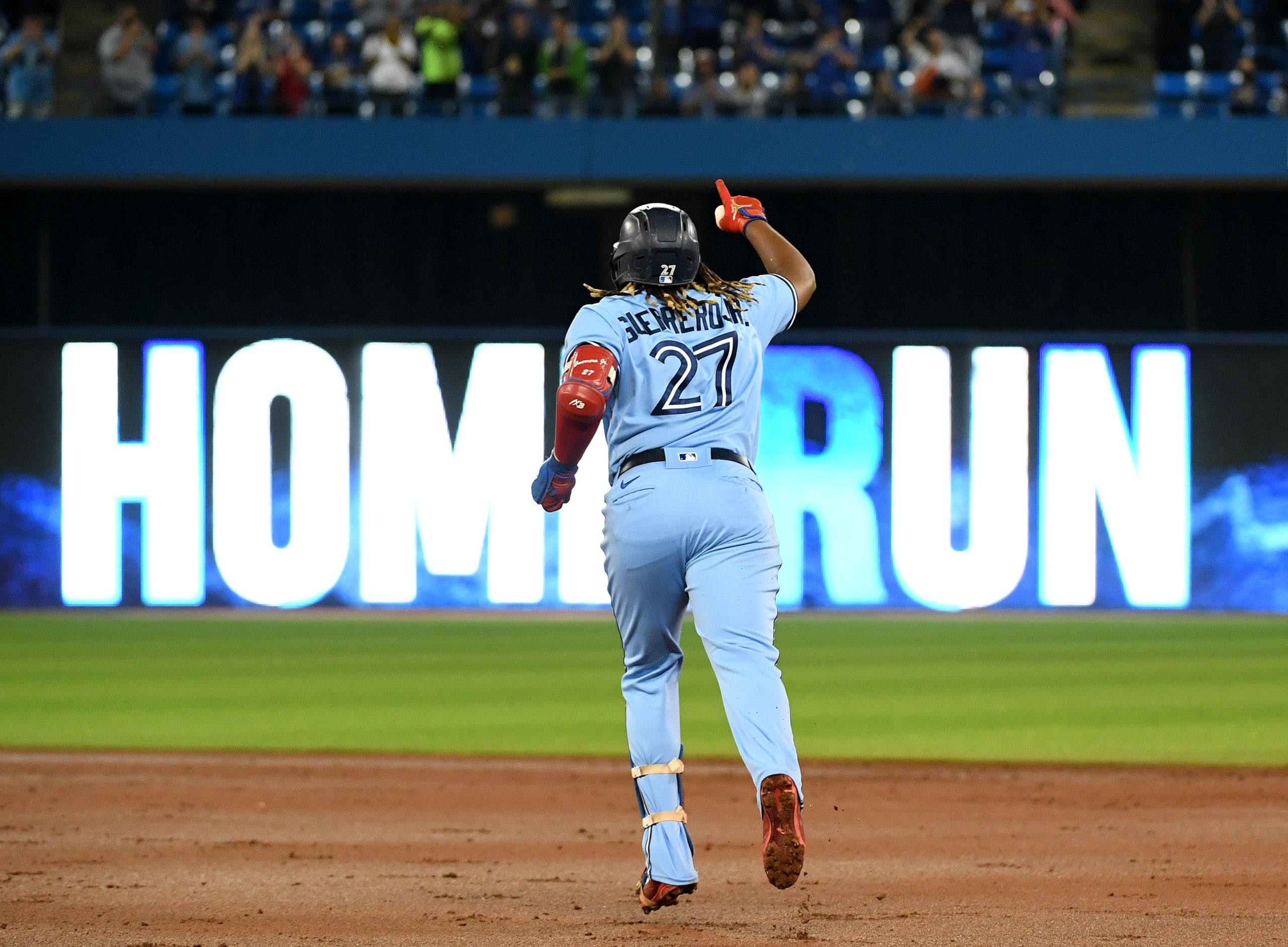 Photo credit: Dan Hamilton-USA TODAY Sports
By Cam Lewis
4 days ago
Comments
If you like dingers, the off-season renovations that the Toronto Blue Jays have made to the Rogers Centre are for you.
According to TSN’s Scott Mitchell, the expected new dimensions of the outfield will see the centrefield wall move in slightly from 400 feet to 397 feet, the left-centre field alley in from 375 feet to 366 feet, and the right-centre power alley in from 375 feet all the way to 357 feet. The lines in left and right field will remain the same at 328 feet each.
This isn’t quite TD Ballpark in Dunedin, but, as Mitchell said in his Tweet, it’s going to make the Rogers Centre even more hitter-friendly than it already is. We’ll have to see see how high the walls in the outfield are before we label The Dome as Canadian Yankee Stadium, but for left-handed hitters like the newly-acquired Brandon Belt and Daulton Varsho, this change could be huge.
Advertisement
Ad
Advertisement
Ad
Just take a look at Varsho’s spray chart from the 2022 season overlayed with the Rogers Centre. A whole bunch of his flyball outs in the National League West would have been homers in Toronto, and now even more of those would be flying out of the park with Toronto’s new dimensions…

Meanwhile, on the other side of that, the Blue Jays pitching staff had better be spending the off-season refining their sinkers, as a lot more balls in the air are going to sail over the wall. You can also definitely see why the front office has prioritized improving the outfield defence as much as they have this winter.
In other news, a handful of Blue Jays were in Toronto for the team’s annual Winter Tour. One of the stops on the tour saw players head to Humewood Community School to chat with a group of kids. A young fan asked Vladdy Jr. which team was the easiest to play against this season…
Advertisement
Ad
Advertisement
Ad

. @BlueJays members were asked by a young student what team was the easiest to play this year. Vladdy happily answered: pic.twitter.com/72sDGfbv7J

The response from Yankee fans was exactly how you’d expect it to be, as there were dozens of people replying to this lighthearted video about how the Yankees live “rent-free” in his head and how “well actually,” the Yankees beat the Blue Jays more than the Blue Jays beat the Yankees, and that the Blue Jays are arrogant and cocky and don’t deserve to be and blah blah blah.
If you watch a video of a baseball player making a joke with schoolchildren and your reaction is any of the aforementioned things above, please, for your own health and wellness, take a moment to go outside and breathe in some fresh air and touch some grass.
Beyond Yankee fans being weird, the big story from the Winter Tour was that the Blue Jays and Vladdy haven’t yet talked about a contract extension this winter…
Advertisement
Ad
Advertisement
Ad

Vladimir Guerrero Jr. stuck to his usual answer regarding extension talks: He's leaving that to his agent. He added:

"This year, we haven't had conversations yet. I'm just going to stay focused and keep working hard." #BlueJays

The Blue Jays and Vladdy avoided arbitration with a one-year contract worth $14.5 million earlier this month and he has a few more arb-eligible years before he’ll be able to hit the open market as a free agent following the 2025 season.
Naturally, the quote about not having any extension talks with the team this winter is going to cause a stir, but this is really a non-story. More often than not, these things start to happen when a player arrives for spring training and it stops once the season gets started. If Vladdy comes out at the end of March and says there hasn’t been any talk about a long-term deal, then there might be some cause for concern.