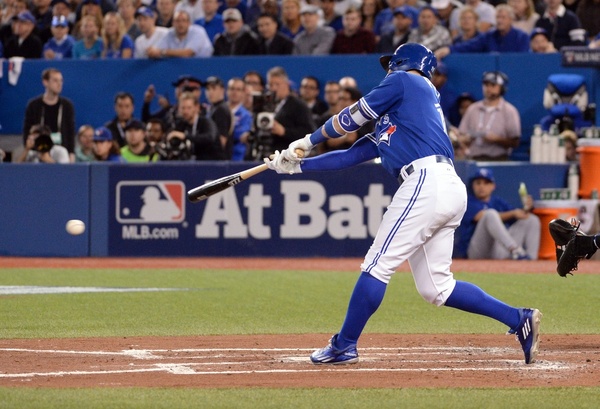 The Blue Jays will score a load of runs in 2016 no matter which player ends up taking regular turns in the lead-off spot, so in a way it’s a little bit pointless to get too worked up about who that hitter would be.

And yet when John Gibbons says, as he did on Friday afternoon, that the guys he’s considering for the spot are Michael Saunders and Kevin Pillar, I still find that I kinda puke in my mouth a little bit.

I understand that there’s more to this question than simply trying to extract the absolute most value out of the spot — that if someone like Troy Tulowitzki just isn’t comfortable in the spot, ridiculous as that might be, we can’t discount the idea there’s value in keeping him happy that might offset whatever value he might provide over, say, Pillar as a lead-off hitter — it’s just… Troy Tulowitzki would provide a lot of value over both Pillar or Saunders. So, I think, would Russell Martin.

That’s not because Martin or Tulo are prototypical, or even ideal, lead-off hitters, of course. It’s just that Pillar and Saunders are kinda bad, and it would be a shame to hand them so many more plate appearances than someone who can actually get on base at a decent clip ahead of Josh Donaldson, Jose Bautista, and the rest.

Sure, Pillar having some speed there counts for something (though a pure stolen base threat, like Ben Revere, is limited by a natural reluctance to run into outs with the MVP at the plate). Having someone who isn’t necessarily a big power guy — because so many of the lead-off hitter’s at-bats will come with no one on base, which would lead to a lot of solo shots — is probably a plus, too. So in those ways Pillar fits the profile a little. And then he’d tell you, somewhat dubiously, that he’d see more pitches to hit in that spot — and from that, bizarrely, he’d probably also suggest that the fact he doesn’t walk very much isn’t such a big deal.

Of course, it kinda is.

Pillar’s career on-base is just .303. He’s coming off a season at .314, and one in which he cut down on his strikeouts in the second half (and moved his OBP way up to .317), but that’s still much too low given the alternatives. Especially since he had some terrific batted ball luck in September (.360 BABIP) which powered an impressive line (.333/.368/.505) that, let’s not kid ourselves, seems to have given a lot of newer fans an inflated sense of his worth.

He’s a tremendously valuable player thanks to his defence, but he’d need to show significant improvement to actually be viable as a lead-off hitter. Of the 31 batters with at least 250 lead-off plate appearances in 2015, for example, 21 had an on-base of .325 or better, with the top 15 all coming in at .338 or above. And Pillar doesn’t even offer a platoon advantage, as he was a worse hitter by wRC+ against left-handers in 2015 (though his OBP was a closer-to-passable .323 in the split).

Saunders, meanwhile, had a run of three strong seasons before injuries ruined his 2015, and would certainly make sense as the lead-off guy for this group if his 2014 version shows up (he hit .273/.341/.450 over 78 games and 263 plate appearances), but his career line is far less inspiring — particularly the .230 average and measly .301 on-base.

It would be easy, then, to be disappointed in John Gibbons’ thought process here — as the title of this post suggests — but there is one small silver lining, I think. And it’s this:

You’re going to see Russell Martin at lead-off during spring games but that’s just to get him more at-bats. He’s not a candidate right now.

Yes, yes, the club has clearly been pretty emphatic about Russell Martin not actually be considered for the spot. But… um… is it just a coincidence that Martin is the guy who, if Tulo really bristles (and maybe even if not), probably should be in the spot? (Maybe wait until Devon Travis a) gets healthy, and b) has more than 238 PA of big league success — 54 of which were in his awful May — before you go anointing him anything, OK?)

He lacks the speed component, granted, but I sure like the .402 on-base he put up in his final year in Pittsburgh, and the .329 he had last season with the Blue Jays isn’t awful, either — especially if you remember that in Kyle Matte’s excellent piece at Capital Jays from back in November on the impact catching R.A. Dickey had on Martin, it turned out that Martin’s OBP jumped to .361 for games a day or more away from having to handle the knuckleball.

Making expecting that kind of performance is a bit of a leap to make, but it’s not nearly as big a one as it takes to think Pillar’s suddenly going to learn to get on base enough to justify such a key spot, or that anybody has any clue what Saunders will be.

Maybe it will turn out that things feel pretty good for Martin at the top of the lineup. It sure wouldn’t surprise me — nor would it surprise me if that’s the hope.

If it doesn’t, though, don’t let that make you think that they’re not still going to score a tonne of runs, that they won’t do something about a Pillar or Saunders struggling in the role, or that ol’ Gibbers isn’t still awesome.

Gibbons, later, on Stroman: “If he had your arm or my arm, I don’t think he’d be out there, I don’t care how enthusiastic he is.”

Seriously, though, I like Pillar a lot, but please Gibbers no!