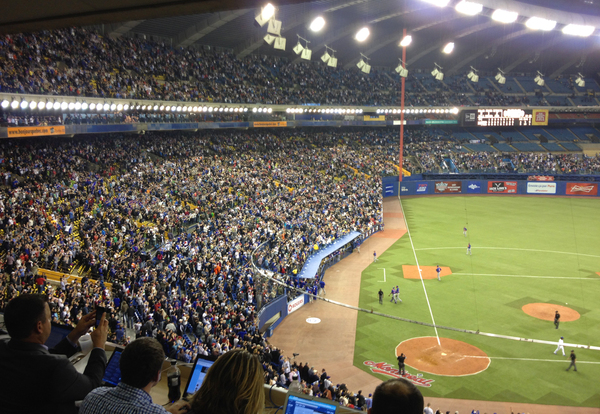 I’ll give Jon Morosi one thing: he knows how to get people talking. Or, at the very least, get people clicking. Or to get himself on the radio in some of the biggest markets in this country, if not the US as well.

He especially knows how to get people talking about big, pipe-dreamy shifts in MLB’s geographical footprint. A year ago it was Monterrey, Mexico that seemed, to him at least, to make a whole lot of sense — a team that could capture the lion’s share of Mexico’s TV market in a city not too far away from the continental United States, he theorized.

Morosi’s favourite group of fans to bait, by far, seem to be Canadians. And so here we are, examining his latest at Fox Sports, wherein we’re told that MLB commissioner Rob Manfred is interested in expansion, and that two of the three most viable cities, in Morosi’s estimation are Montreal and Vancouver (with Austin, TX, coming in at number two).

This is low-hanging fruit that’s naturally going to get people in those places excited. And it’s not like there isn’t a kernel of something to be excited about if you can squint hard enough to see past all the obstacles (like competing cities, corporate investment, stadium issues, weather, and the currently sagging Canadian dollar). It’s just… well… as Morosi explains:

We’re five or six years — at the very earliest — from seeing the inauguration of new MLB franchises. But for the first time this century, it’s reasonable to wonder what the next round of MLB expansion will look like.

Apparently it was unreasonable a year ago! Or all those other times he’s banged the drum for Montreal — though, admittedly, some of that talk has been about relocation rather than straight expansion. But now, today, let’s dive in!

Not because those aren’t three incredible cities richly deserving an MLB team and certainly capable of supporting one if it’s done right, but because more than anything this feels like pointless busywork and a gift to his radio show producer buddies.

Of course MLB and the players union have reasons to want to expand, from creating new jobs to pocketing exorbitant expansion fees to creating a better geographical alignment of divisions, etc. And of course there are places that seem like natural fits. Ooooh, and hey, when you’re talking Montreal and Vancouver there are all sorts of interesting things that come up about Canadian TV rights, Bell/TSN trying to crack Rogers’ monopoly on the sport in this country, and the romance of the Expos.

But the process going to proceed like it proceeds, which is real slowly — ask hockey fans in Quebec (or, if you want to get especially down on your chances, Hamilton). So… why are we here, exactly?

It’s not that I don’t acknowledge that expanding into Montreal and/or Vancouver would be terrific for Canadian baseball, and maybe it’s only easy for me to be a bit aloof here because I’m in a market that already has a team, but I dunno… given how easily the enthusiasm of fans and the corporate community in these cities can be used, for example, as leverage to help MLB get public money for stadiums in places like Oakland or Tampa Bay, until something actually concrete happens it feels a little patronizing to keep prodding people to get all breathless about it.

Nice idea, though. Go get your corporate ducks in a row, Montreal and Vancouver, and let’s talk about this again in, say, three years. OK?