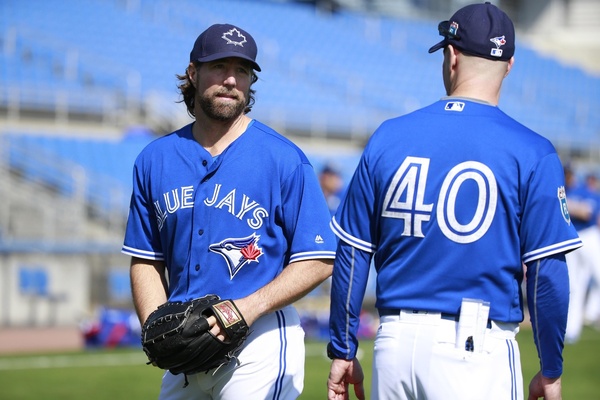 It’s Game Two of Grapefruit League action, and the “home” opener for the Blue Jays in Dunedin, so what useless things can we look forward to getting prematurely excited or overly negative about today?

Actually there are quite a few of them!

RA Dickey gets the start today, but more interesting than that is the fact that Aaron Sanchez and Jesse Chavez will each get two innings as well — matching Drew Hutchison’s total from yesterday. The competition for the fifth starter spot is off and running! And… well… it’s more just a trot at this point, but still!

We’ll also get our first look (read: listen) at Michael Saunders in quite some time, and Domonic Brown. Hey, and Kevin Pillar is in the lead-off spot that he totally in no way should be allowed to hit from during the regular season. That is unless, by some magic, he turns himself into a guy who actually can get on base at something approximating an above average rate — league average in the AL in 2015 was .318, Pillar was at .314, but sits at .303 for his career and put up a .311 rate in the second half.

Or it doesn’t even have to be magic. I’ve said multiple times that I admire the shit out of Pillar for what he’s done on the defensive side of the ball, turning himself into the kind of elite defender nobody ever thought he had the ability to be — or that nobody actually put into print, at least. You want guys like that on your team and in your organization. It’s fantastic.

It’s just… putting his athleticism to work in centrefield is one thing, but turning a poor offensive player (a guy who can barrel up balls, yes, but who can’t take a walk and lives and dies by BABIP) into someone who deserves the responsibility of getting on base in front of the team’s most vitally important sluggers is a whole other thing. If there was an easy way to turn guys into great hitters, there’d be a whole lot more great hitters. And sure, Pillar has natural ability with the bat, and time will help him, as will tinkering, but holy shit we haven’t seen anything remotely close to enough from him to think that this experiment is anything but kiiiiind of a joke.

I’m not remotely rooting for him to fail, mind you — if he succeeds that would be great. It’s just you’d like to think that the people making the decisions would give a little more weight to all the evidence that says he’s ill-suited for the role.

Cool that he wants it, I guess? Better than having someone unhappy there? I don’t even know.

Gregor Chisholm tweets that John Gibbons told reporters today that, had the Jays not acquired Drew Storen, Aaron Sanchez wouldn’t be getting a look at the rotation right now. So… that’s kinda dumb, even if it’s unsurprising. (Gibby still the best, though.)

On the (mild) injury front, Scott MacArthur tweets that Aaron Loup (sore forearm) will play catch tomorrow, and Marco Estrada (tight back) threw off flat ground today and will throw from a mound on Friday. Good news!

TV: None (audio through MLB.com though!)