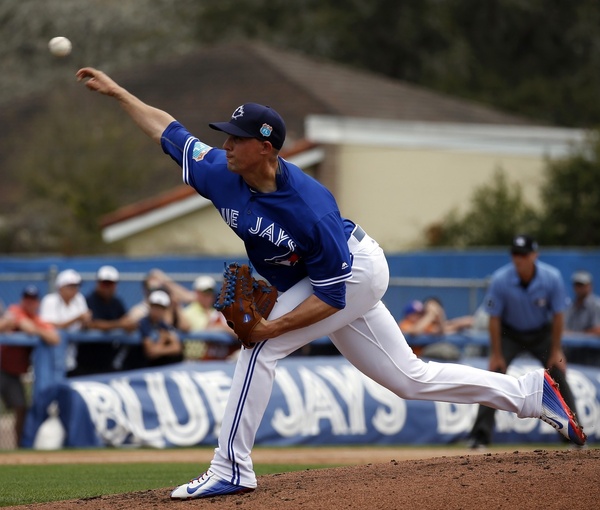 Over the last week a narrative has emerged (which I’ve certainly pushed) that if Aaron Sanchez wasn’t going to be made the Jays’ fifth starter, maybe it’s best to send him to Buffalo as depth and to continue to develop and stay stretched out — and maybe Jays brass would see it this way. But there are some pretty large caveats to that, namely that it relies on Gavin Floyd continuing to stay healthy and look solid, and Sanchez isn’t going to look so tantalizingly good — and so clearly ahead of the competition — that the Jays can’t possibly do anything but put him in the rotation.

Here on Friday against the Houston Astros, Sanchez did nothing to dispel the notion that he might just be doing that.

The Astros didn’t exactly send their A-lineup, with no Altuve, Correa, Rasmus, or Springer, but it wasn’t a group of kids from the low minors or anything.

Buck and Pat certainly were impressed on the TV broadcast, which, of course, is worth approximately nothing.

But Sanchez himself maybe wasn’t quite so keen on the performance. According to a Gregor Chisholm tweet, “Sanchez was really happy with his 0-2 curveball today but admitted he needs to find a way to make it effective in 0-0, 1-0, etc type counts.” He also said that he’s still trying to refine his changeup, and that he managed to get it under 90 (a “positive step,” Gregor notes), but clearly it’s a work in progress.

“We understand if Gavin does get the job, so be it, I’ll go down and do what I need to do to make this team better,” Sanchez says, according to another tweet from Gregor.

I don’t think he means Buffalo when he talks about going down.

Maybe I’m projecting, but it certainly seems to me (from what little we have to get a read on this) that Sanchez believes he’s a big leaguer. And so he should. He’s done everything this team has asked of him at the big league level, and spent the entire 2015 season on the big league roster (save for three minor league rehab starts).

“In this clubhouse, there is no adversity, no tension,” he says, regarding the competition for the fifth spot. “I see Jesse as a really good friend, I see Gavin as a mentor.”

Big leaguers, he means. Big leaguers like him. And “this clubhouse” — the Blue Jays’ clubhouse.

If I’m reading that right, does this make it harder for the Blue Jays to sell him on going to Buffalo? Do they think twice about it?

Try as I might to find ways to look at the negative side of the coin, it’s undeniable that so far this spring Sanchez is, again, doing everything the club is asking. And if he continues to show this ability to command the ball and to keep the free passes for a minimum, the pendulum maybe swings back the other way from where it was after Floyd’s last strong start, and you begin to think that Sanchez just might have control enough of his great raw stuff to get by as a starter, to provide value to the team, while (hopefully) still not yet being a finished product.

If I’m the Blue Jays, in doing that I’d be wary of what might happen if he struggles, and if that might end in a move back to the bullpen sooner than he deserves. On the other hand, maybe if he starts and fails it gets easier to tell him to go down to Buffalo, get it right, don’t give up, and get back quickly to help the rotation again.

Or maybe he starts and it works.

So far so good, at least. And that’s a great thing. Sanchez is a really important pitcher for this organization — long term he helps them so much more in the rotation. If they can keep him there, which it certainly looks like they might (depending on that secondary stuff and the lefty split).

And now Sanchez is starting to run out of time fuck it up! A quick look at the calendar shows that he has only about three starts left this spring — and, interestingly, if he were to start every fifth day from here out (which, because it’s spring, he certainly may not), he’d be in line to start Saturday, April 2nd against the Red Sox in Montreal, and then (unless he’s skipped because of a Thursday off-day) the Friday after in the Jays’ Home Opener.

Uh… no pressure. (Uh… and also: dare we think that might actually kinda be awesome?)