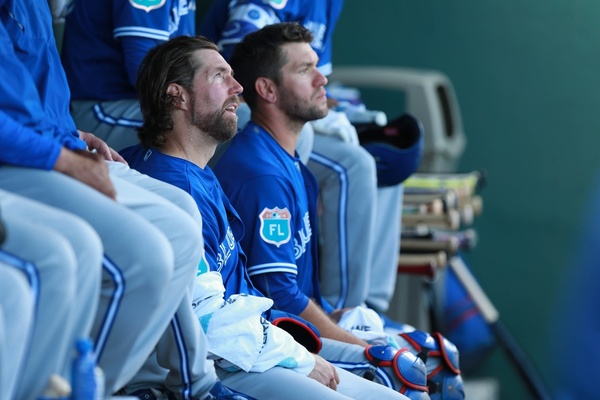 Baseball is back, and that’s so great. But also, man… this is not the way that the Tampa Bay Rays wanted to start their season, I’ll bet.

First off, their ace Chris Archer gets out-aced by Marcus Stroman on Sunday in a stark reminder that all the people who spent the winter concerned about Stroman having never led a staff for a full season before were badly in need of actually watching what he can do on the mound. As USA Today’s Ted Berg perfectly tweeted yesterday, “Stroman’s plan to only throw perfectly placed pitches with tons of movement at the bottom of the zone seems to be working out OK.”

Then, at the end of the game, the Rays had to face young Roberto Osuna, who reminded us that, even though it’d be great to see him as a starter, he is a boss of a closer right now. The Red Sox and Yankees’ bullpens get more ink, and rightfully so, but the Jays are hardly slouches at the back of the bullpen, and as much as I thought it was maybe weird and not alright that Osuna didn’t lose his job to Drew Storen, I was very alright with Storen not being the one called upon in that situation — which, even though it was slightly shaky for the Jays, never for a second felt like it was out of control.

And the Jays did all this, of course, with their lineup not even quite clicking the way that we know it can. That one can say that after a game started by Archer in which the Jays scored five is a scary thought for anyone, not just the Rays, but should be especially for the poor Rays, who have to send left-hander Drew Smyly to the hill tonight. Not that Smyly isn’t pretty good, it’s just that run of right-handed hitters the Jays have… Donaldson, Bautista, Encarnacion, Tulowitzki… it’s… you almost forget how ridiculously good it is — and how good it’s going to be to have a full season of it, too.

There are a bunch of great things out there that I’ll get to in a Daily Duce tomorrow at some point — including the great stuff we had here yesterday from John Lott and from Cam Lewis all weekend. For now, here’s what I figure is pertinent:

The guys at TSN, and Scott MacArthur, in particular, chat in this video about the changes that RA Dickey made this off-season in order to hopefully help combat the slow starts that have plagued each season of his Blue Jays’ career. It’s a little “best shape of his life”-y, but MacArthur notes that Dickey, who is down 12 pounds, came to camp with his knucklball already working at 78-80, which normally is a process that takes a number of starts (ie. he begins slower and builds the velocity up). Scott also tells us that Dickey had received a cortisone shot in his shoulder by this point last year, and reminds us that he hurt his knee and pitched through it. Should be interesting to see how tonight goes, then. Dickey was fantastic in the second half, if you can remember..

Speaking of John Lott, over on his Facebook page he fills us in on the Jays’ late addition of Franklin Morales, the left-handed former Kansas City reliever, to their bullpen — ostensibly in Aaron Loup’s role. The contract is non-guaranteed, which is… not as weird as you think, apparently. It’s also a terrific pick-up for the club. John explains: “Loup started the season on the disabled list, as a result first of a flexor muscle strain near his elbow, and then an apparently separate elbow problem that required a cortisone shot last Tuesday. He was shut down until Friday when he threw on flat ground. Essentially, Loup is starting his spring training on opening day and there is no timetable for his return.” He adds that “Morales held left-handed batters to a .192 average last year. Over a nine-year career with three clubs, lefties have hit .210 with a .288 on-base percentage against him.”

Shi Davidi notes at Sportsnet that Morales is a Scott Boras client, meaning that the Jays’ string of not doing business with the Super Agent is over.

Shi also tweets that, on average, the Jays’ opener yesterday was watched by 1.46-million viewers on Sportsnet, which is a 90% increase over last year (and made it the most watched program in Canada for the day).

The Blue Jay Hunter tweets an excerpt from a press release announcing that the Jays will offer a range of Mill Street beers at the Rogers Centre this season, as well as Brickworks cider. Holy shit yes! But, of course, this was bound to happen, with the companies being bought by AB InBev last fall. Pretty sure this is just a Goose Island situation, where the parent company saw something that was working and basically doesn’t want to fuck with it. So… nails.

Lastly, I guess I’d better mention this Edwin Encarnacion contract thing, as Shi Davidi of Sportsnet notes that the Jays didn’t make a last-minute push to sign an extension with their slugger before his self-imposed deadline passed yesterday, and that they hadn’t spoken to him in “a few weeks.” The club’s last offer was only for two years, which to Edwin’s camp is (understandably) a total non-starter, Shi reports. Which… yep. I wrote extensively about the Encarnacion and Bautista situations late last week, by the way, over at Vice Sports.

Wait, Wednesday’s game is an afternoon one? YASSSS!!!