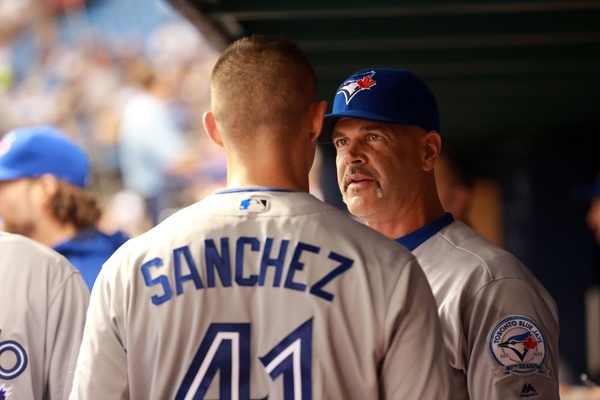 It feels like maybe I want a little too much to make every Aaron Sanchez start into some kind of event — which in turn kind of feels like I’m spending too much time waiting for the wheels to come off, and not nearly enough enjoying how incredible he’s been so far this season (and throughout the spring) and what that could legitimately mean for the club going forward — but here we are again.

The reason? The New York Yankees. And not just the big, mythic, etc., etc. New York Yankees, but the ones that will send only two right-handed hitters to the plate tonight (Alex Rodriguez and Starlin Castro), while everyone else either bats from the left side or is a switch hitter who will certainly choose to do so.

I’ve mentioned it too many times already this spring, but Sanchez was pretty impressively awful against lefties last season, and it’s how he fares against them that will likely determine just what he is as a pitcher.

That all won’t be decided tonight — not by a long shot — but needless to say, it’s a test. His first real one of the season, I’d say. So all those curveballs and changeups bear watching — even more so than usual.

His fastball’s probably going to be OK, eh, Steven Souza?

As you can see from the lineups below, Josh Donaldson will be back out at third base tonight. That’s good.