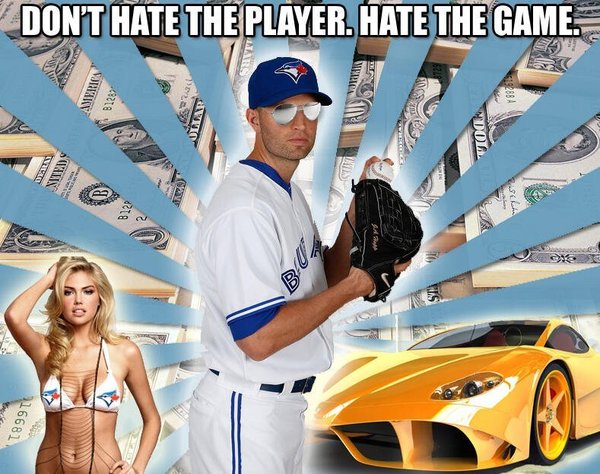 OK, I couldn’t possibly have summed up where the Jays are at as well as Stacey May did in her earlier piece about the club’s sluggish start, nor could I do as terrific a job looking at Aaron Sanchez and his fine start yesterday (according to everybody but himself) as John Lott did with his earlier piece.

I suppose I should talk about JA Happ, then, but I’m slightly afraid to. Why? Because I’ll totally jinx it if I point out that so many Jays fans think he’s bad, even though he’s actually kinda good and has certainly been good so far in his return to the Jays’ fold. So let’s just move on and enjoy some baseball, shall we?

Let’s maybe see this team win a damn game, too.

Pat Venditte was called up to the Jays today, with Arnold Leon being D’d FA (and hopefully snuck through waivers back down to Buffalo). I wrote about Venditte, the switch pitcher who has a new weapon that hopefully can give him the kind of edge from the right side that he already has from the left, over at Toronto Life.

Arden Zwelling tweets that John Gibbons says Venditte will mostly be used against left-handers, but not exclusively.

Shi Davidi tweets that Mark Shapiro says Stephen Brooks’ resignation was “probably the result of a mutual agreement that there was some disconnect on alignment.” I like that Shapiro is poaching people (in this instance Andrew Miller, an executive who was apparently especially important to, among other things, Cleveland’s upgrading of their spring training site a few years back) he believes in from his old organization, frankly. I’d like to see some more diversity, though. Plus some better understanding of how American imports are going to play in this market. I’d also like to stop the word “cult” from always coming into my head whenever this happens.

Hey, and I was wrong on this: apparently Mark Shapiro wasn’t fond of Stephen Brooks’ Twittering. See this tweet from John Lott. Hmmm…