It’s getting to a point where it’s difficult to brush games like this off with “it’s early.” I mean, yeah, it is early, there’s no denying that. But after a month of baseball, this team is massively underperforming in a variety of different areas, struggling to stay above water, and there really aren’t very many positives to grasp on to.

Two different blown leads, only mustering three hits, an inability to capitalize on a pretty strong outing from a starting pitcher, and it feels like the same story that we’ve seen all of April. We all know that the 2016 Blue Jays are much, much better than how they’re performing so far, but with so many different wheels struggling to spin, how long until they manage to pull it all together and kick the door down?

I mentioned in the Game Threat yesterday that even though Chris Archer was on the mound, I didn’t feel all too worried about him putting together a completely dominant start. And even though the Jays didn’t muster anything off of him aside from a Jose Bautista two-run home run that snuck past the left field foul pole, he really didn’t pitch all too well.

He only allowed one hit, which was that Bautista homer, but otherwise, he offered four walks and only struck out four. This one really falls on the Jays and their hitters’ inability to capitalize on what they were given, because they certainly made life easier than they had to for Archer, who, as he has all season, really didn’t look like himself out there.

Josh Donaldson, Jose Bautista, and Kevin Pillar were the only ones who accomplished anything at the plate yesterday, while Edwin Encarnacion, Troy Tulowitzki, and Justin Smoak all put up goose eggs, going zero-for-four without managing a walk.

Like I said earlier, this game featured a solid performance from J.A. Happ that usually would be good enough to earn a win with this lineup. He went six-and-two-thirds innings, allowing three runs on six hits and three walks while striking out seven, which was a season high. Jesse Chavez came in and pitched one-and-a-third innings of good relief before giving the ball to Brett Cecil in the bottom of the ninth where he, well, uh, yeah.

Cecil induced a ground ball to Justin Smoak, but he was beaten to first base by Brad Miller. After that, Kevin Kiermaier doubled with two strikes on a ball that Jose Bautista probably maybe should have got to, and then Curt Casali singled the winning run home. Cecil now has five losses on the season, which is the most for a relief pitcher since the early 1900s. But these early season struggles aren’t uncommon for him:

Insanely enough, Cecil’s ERA for the rest of those both those seasons was exactly the same: 2.09.

Speaking of Cecil, here’s an article from MLB Trade Rumours talking about his historically bad start. As Drew Fairservice pointed out, he’s had a terrible first couple of months in each of the past two seasons and has then gone on to be excellent, but still, five losses in April is a pretty awful thing to have on your resume.

Ken Rosenthal says that the Jays are going to look for upgrades to their relief core, but I’m not really sure who it would be, or who from this current group would be jettisoned to make room for them. The article mentions how Aaron Sanchez will eventually be moved to the bullpen, which will help, because of innings limit.

Ben Nicholson-Smith says that Aaron Loup will be throwing off of a pitching mound tomorrow, which is a big step for his recovery. But in other injury news Russell Martin’s neck spasms are keeping him from catching two days in a row.

Jake Odorizzi will get the ball for the Rays tonight as they look to win the series. The Jays faced the right-handed Odorizzi back on the third game of the season, in which he tosses five-and-two-thirds innings allowing only one earned run while striking out ten. So hopefully this time we see a better result, but judging by the way the bats have been going, I’m not holding out too much faith.

That said, if there was a reason to be optimistic, it’s the fact that Odorizzi has struggled mightily this season with right handed hitters. He usually hasn’t had this issue throughout his career, but this season, righties are slashing a .329/.360/.514 line against him, and, well, you know, the Jays have a whole bunch of power hitters that bat from the right side, so, we’ll see.

And for the Blue Jays, Marcus Stroman will make his sixth start of the season. The last time he faced Tampa Bay was in the season opener, in which he went eight plus innings, allowing three earned runs on six hits and one walk while striking out five. He’s ran into some tough luck recently, most notably in his last start against the White Sox, where he was cruising before getting drilled by a ball in the sixth inning. 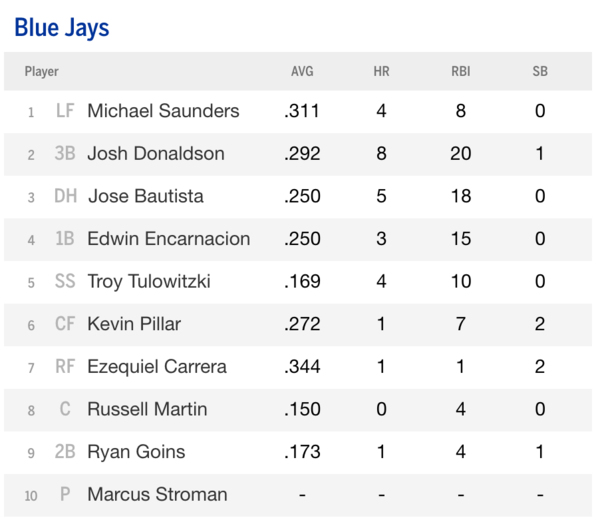 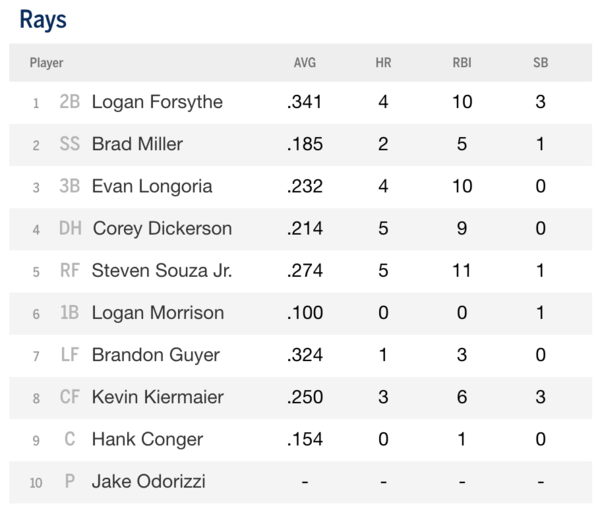 CanucksArmy Game Day: Streakworthy, Schmidt, DBH, and Aaron Pritchett might shave his head because of the Canucks