Home > 2016 > 05/02 > On his 25th birthday, Marcus Stroman dominates the Rays, then shows up courtside with Jose Bautista at the Raptors-Pacers game 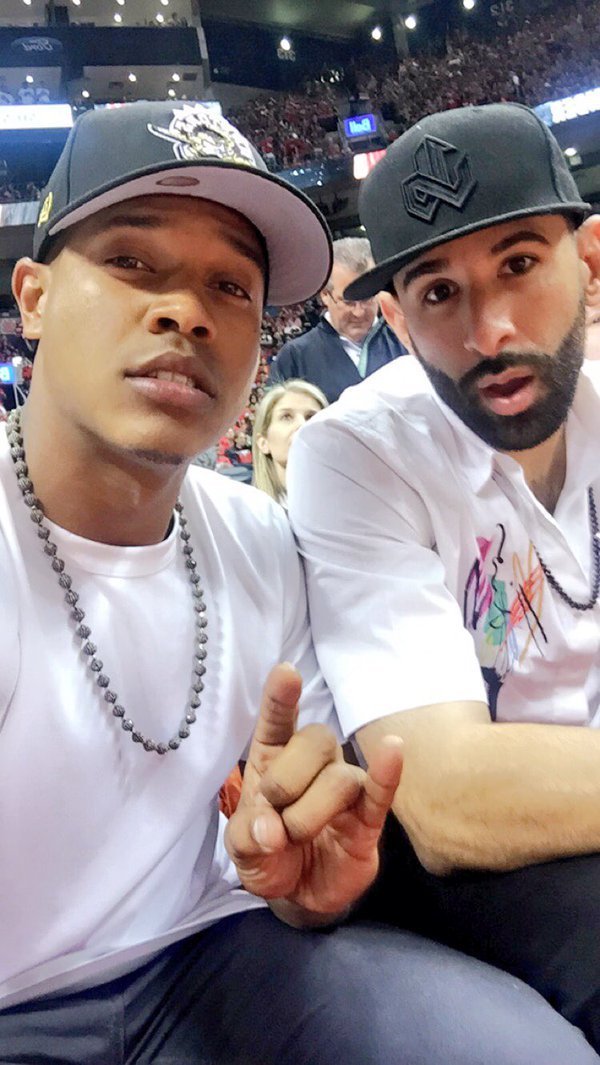 Even on a weekend when the attention of most Toronto sports fans was on the other two major teams in the city, Marcus Stroman managed to be a damn star.

How could he not be after he began the day — his 25th birthday — in Tampa, cut through the Rays lineup like a buzzsaw, then made it back home in time to sit courtside with Jose Bautista as the Raptors closed out the Indiana Pacers for a nervous Game 7 win in the first round of the NBA playoffs?

I mean, how cool is that?

Of course, Stroman might not have been so keen to be front and centre during the biggest Raptors moment of the last 15 years had he not been kinda brilliant earlier in the day.

The Marcus Stroman that we saw on the hill in Tampa on Sunday was precisely the Stroman you want to want to see every time he takes the mound, I think. He was maybe a little flyball heavy, but it was at least the Stroman who misses bats.

That isn’t to say that it’s not mostly fine that Stroman has become an extreme groundball guy who is more inclined be efficient with his pitch counts than constantly racking up strikeouts (and who still has more than enough in his arsenal to eschew that bent when he needs to). But he really can miss bats! Something he did repeatedly with two seamers, with sliders, with cutters, and with curves over the course of the day.

What it led to was an eight-inning, three hit, two walk performance that was marred only by a no-doubt solo blast from Evan Longoria (who Stroman had struck out swinging twice already at the time). Even better, it led to nine strikeouts. Better still, it led to more than twice as many swinging strikes than Stroman was averaging on the season — 13.6% of his pitches were whiffed on; he came into the game with a 6.3% swinging strike rate.

And he did so while getting through eight innings on 103 pitches.

Efficient, 50% groundball rate, and over a strikeout per inning? Holy shit yes.

Here’s how it went, inning-by-inning:

The game wasn’t quite over at that point, but the Jays bats finally broke out in the top of the ninth — not that it was quiiiiiite all their doing. Edwin Encarnacion scored Darwin Barney on what should have been a bases-loaded double play ball to end the inning, but the Rays were in a shift and Logan Forsythe (the second baseman, playing on the left side of the bag) could only go to first. Troy Tulowitzki then took an elevated fastball from Alex Colome deep to seal it — a blast that happened not two minutes after the Rays broadcasters spent a lot of time talking about the Jays’ struggles with elevated fastballs all series, especially after Bautista missed two of them for a strikeout that inning.

Nice to see someone else’s bullpen blow a close one for a change! Nice to see Troy Tulowitzki crush a damn fastball and come up with a big hit for the club! Nice to see a Jays reliever (Roberto Osuna) I’m not afraid might blow up at any moment! But it was still very much Stroman’s night… er… day.

Either way, I hope Drake and Joey Bats bought him some birthday shots after the Raps game. He fuckin’ deserved ‘em.