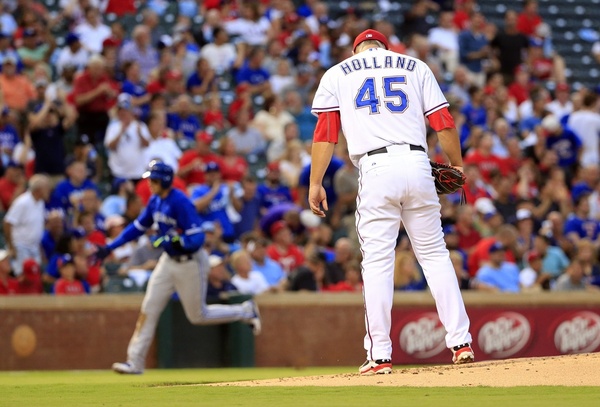 The last the Blue Jays saw Derek Holland it was October. In Texas and with their backs against the wall in the ALDS, the Jays unsurprisingly exploded on the left-hander.
Five hits, one walk, six earned runs, three dingers. Holland managed only six outs. He was lifted after 37 pitches. The Jays won it in a romp.
Or… at least they would have won it in a romp had things not gotten a little bit tense late, when John Gibbons brought his number three starter, David Price, out of the bullpen after getting only four innings out of RA Dickey. Price’s appearance was notable because it was curiously timed (though not indefensible), because he was kinda bad (as usual, given it was the playoffs), and because it eliminated any doubt that Marcus Stroman would be called-upon to start Game Five, if the Jays managed to make it there.
We all know how that turned out, of course. What we might forget sometimes, though, is that Holland gonna get lit the fuck up against a lineup like this. Let’s do it.

It’s Kevin Pillar in the lead-off spot again tonight, which is fine enough. But don’t go getting used to it just yet — Hazel Mae tweets that it’s just a day off for Michael Saunders. Makes sense with the lefty Derek Holland getting torched by the Jays right-handers for Texas. Saunders will be back in there tomorrow.

Speaking of platoon splits (weren’t we?), according to a Ben Nicholson-Smith tweet, John Gibbons says that Brett Cecil will be used in more of a strict left-on-left role for the next little while — presumably until he get himself right finally. I can live with that.

Advertisement - Continue Reading Below
Next Game(s): Tomorrow, vs. Dodgers, 7:07 PM ET
And now, the lineups…