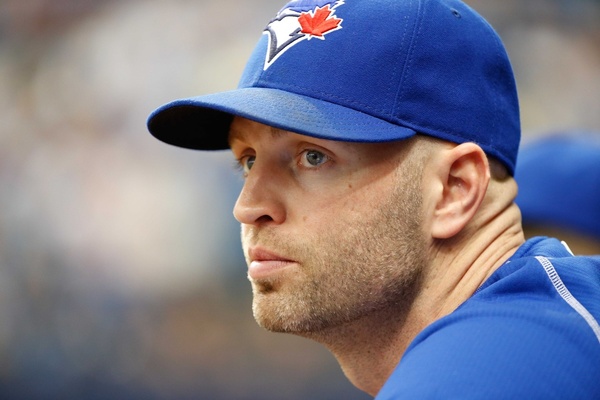 On May 7th, 2013, I had some pretty memorable realizations about baseball. About its risk, its fallibility, and its humanity. About what matters, and what doesn’t. Most of you will remember that was the day that pitcher JA Happ, during his first run as a Toronto Blue Jay, took a line drive from Desmond Jennings to the head, and suffered a contusion and a laceration to his left ear as a result.

I’ll admit that, while watching Happ’s recent success, I’ve been thinking a great deal about that three-year-old game. That’s not because I’m a sadist or a masochist, but because for whatever reason it speaks to me about how our personal relationships with players and teams ebb and flow over time. It was a highly emotional, painful, and communal moment in context, and now it exists as a meaningful past detail in the rise of a pitcher’s career.

For the Toronto Blue Jays, 2013 was a season characterized primarily by crushing disappointment, a run that began with great blockbuster trade-induced expectations and ended with the team at 74-88 (and last place in the division.) As early as May, Happ was already regarded as untrustworthy on the mound, and by the time the team got to Tampa Bay he’d fallen apart against the Red Sox in a record-breaking fashion.

Oddly, I still remember what he looked like after he was pulled in the fourth from that May 2nd Sox game. I have a distinct memory of an extended shot of him soul-searching in the Rogers Centre dugout, ghost-faced and staring off into the distance as the fan commentary on his myriad failings flooded every available outlet. Pieces subsequently appeared with headlines like “Happ’s free passes, command issues sink Blue Jays,” and “Post-season hopes already fading.”

“I made it tough on myself,” he told the media, attempting to explain the seven walks he surrendered in just a handful of innings.

But Happ came back to the mound again, and in the moments before his now famous injury, things in Tampa Bay were tied 1-1 with one out in the top of the second. I still have a really hard time watching the video of the sudden ball-to-skull shot that followed, not only because of how visceral my immediate reaction to it is, but because of how all the emotions around that game still resonate with me more than three years later.

How the ball was still in play after impact, with Molina and Escobar coming in to score. How Happ’s teammates struggled not to burst to his aid from the dugout before time was officially called. How Arencibia, Kawasaki, Lawrie, and Izturis hovered over him in a helpless circle. How Jennings was visibly shaken, covering part of his face with his jersey. (The pair later connected, with Happ conveying that he understood it wasn’t his fault, and Jennings feeling better about the whole awful thing.) And of course how an excruciating eleven minutes went by where Happ just lay there, writhing in what must have been excruciating agony.

I remember the ten thousand people at The Trop that afternoon being impossibly quiet and still, most of them on their feet in reverence as Happ was carried off in a stretcher and taken to Bayfront Medical Centre. RA Dickey later told reporters that he started praying, while Adam Lind conveyed that the energy was “very sad.” Though injuries in baseball are not exactly uncommon, the gutting severity of this one in particular broke the fantasy of the game for so many of us. It reminded us that these superhuman men who come out and perform for us day in and day out are really just vulnerable, sacrificing human beings.

At the time, I wrote the following: “What happened to Happ on Tuesday night is a grotesque metaphor, really. We go to games to leave our heads for a short time. He goes out there for wins so we can go out there for comfort. And that tenuous relationship was injured in the second inning. Though we often throw around the idea, there really is no sacred Church of Baseball — there are only the people who built it and who fill it, together. There is no actual magic, only the shared feelings of a community, believing in that magic. It’s only in these communal moments of suffering that we realize that all we really have is each other.”

The Jays came back to win against the Rays, 6-4.

After that game, Happ ended up on the fifteen day disabled list, and then went to the sixty day as he recovered from a skull fracture, a sprained right knee, and hearing loss. The interviews he gave in recovery emphasized how lucky he was. “It looks like I moved just a little bit,” he said of the split second moment. “I don’t remember doing that, but it looks like it was just enough to where it must have caught me in a better spot, because I think it could have got me head on.” His incredible good fortune is an odd thing to reflect on now, coming out of watching him pitch an almost complete game shut out against the Giants on Tuesday.

After being traded at the end of 2014 for Michael Saunders, and spending some time pitching with the Mariners and then the Pirates, Happ is all ours again, something that many of us are probably surprised we’re proud to say. When he was acquired at the end of November he was admittedly a big question mark, with some uncertain of his viability, and others citing his 1.85 ERA in eleven starts with the Pirates as a very good sign. Yet no one really anticipated how stunning he could actually be, that he’d end up with the best ERA on our roster, or that he’d be invoking (very different) headlines like, “J.A. Happ dominant in Blue Jays’ win over Giants,” and “J.A. Happ pitching like an elite lefty in his return to Toronto”

Happ’s dominance may be historically unfamiliar to Toronto fans, but if you go into the previous season you’ll see that he actually hasn’t allowed more than three earned runs in seventeen consecutive starts. The only two pitchers in the MLB whose numbers better him on that front are Cy Young winners Clayton Kershaw and Jake Arrieta, a factoid I’ve been repeating over and over to myself in complete awe.

Of course this improvement is not a fluke or accident. As John Lott reported when Happ was re-acquired back in November, we’re benefiting from Pirates’ pitching coach Ray Searage’s ability to spot a now-corrected delivery flaw. “Searage helped him curb wasted motion and keep his body on a direct line to the plate while maintaining a higher arm slot,” Lott wrote. The lefty’s now elite numbers are a very happy case of how unpredictable baseball can be, and how it’s never a good idea to bring your preconceived notions to it’s outcome.

As I’ve already openly admitted to being a narrative baseball fan, I feel comfortable saying how pleased I am to see Happ’s ascent, especially after seeing him suffer so grotesquely. For many fans, that 2013 game was unforgettable for all the worst kind of reasons, and Happ now seems poised to pitch unforgettably for all the right ones.