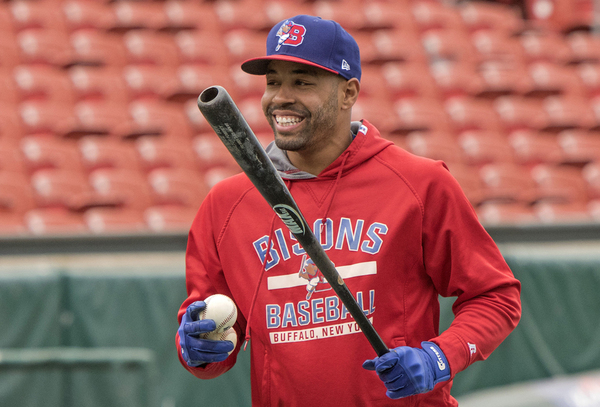 BUFFALO – Dalton Pompey had already started to hit after a slow start, but an underlying problem persisted. It was glaringly evident in a game in Buffalo on May 30, when he was picked off first base in the first inning and dropped a popup in the second.

Adding injury to insult, Pompey injured his knee crashing into the centre-field wall in the second inning while attempting to make a catch. He hobbled off the field, his day’s work done.

Due to the injury, Pompey missed three games. On June 3, the day he returned to the lineup, he had a visitor. Gil Kim, the Blue Jays’ new director of player development, sat down with him to discuss a longstanding issue: Pompey’s tendency to become distracted, to fixate on a bad at-bat or a mistake on defence, and let that distraction undermine his focus on what he should be doing in the moment.

“Maybe I struck out with the bases loaded, and now I’m going back out in the field thinking about that at-bat rather than thinking about the guy who’s hitting,” Pompey told me in a candid interview in the Buffalo clubhouse. “Next thing I know, the ball’s hit to me. Now I’ve got to shut that thought off and find the ball. By that time, it was sometimes too late. Or if I got on base and the (scorer) gives an error and I’m thinking, man, they should’ve given me a hit on that. Next thing I know, the ball’s hit into the gap and I’m startled by the whole thing.”

His erratic focus is one of the reasons Pompey lost his job as the Blue Jays’ opening-day centre-fielder last year, finding himself back in the minors within a month.

He spoke to no one about it except his parents back home in in the Toronto suburb of Mississauga. Then Gil Kim came to Buffalo for a chat with Pompey, and they focused on focus.

Most Blue Jays fans know Pompey’s backstory by heart — how he surged through three minor-league levels in 2014 and made his big-league debut that September, then won the starting centre-field job in the spring of 2015. It was a classic tale of a hometown boy making good.

It didn’t last long. Pompey was batting .193/.264/.337 and playing uneven defence when the Jays shipped him to Buffalo on May 2. Not long after that, he found himself even farther away from the big leagues, in Double-A New Hampshire. Then-GM Alex Anthopoulos thought it was a good idea to ship Pompey farther from the glare of the hometown spotlight.

Pompey hit his way back to Toronto in September and made the playoff roster because of his speed. As a ninth-inning pinch-runner in Game 6 of the ALCS, he stole second and third with none out. Three outs later he was still on third (his dejected expression the subject of a poignant photograph) and Kansas City was celebrating a clinching 4-3 victory.

In a little more than a month, his results have dramatically improved. But until recently, his focus still had not.

“If I struck out, I’d be thinking about it for at least an inning,” he said. “When I was making mistakes, whether it was on the bases or in the field or swinging at bad pitches, it was because I was thinking about something totally different from the actual task at hand.” 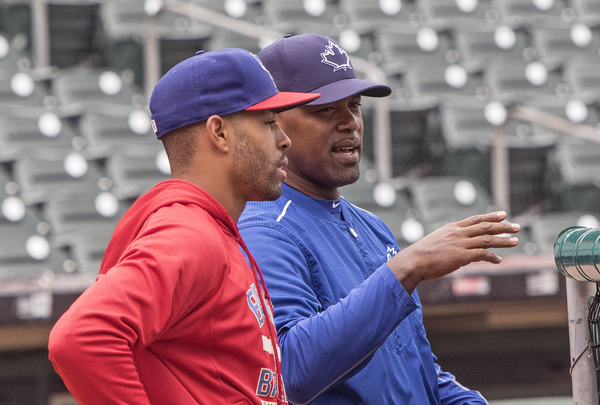 So when Gil Kim arrived, Pompey acknowledged his problem and said he was open to suggestions.

“He asked me what my goals were,” Pompey recalled. “My goals were to focus more and to be more consistent. We came up with a plan. We wrote it down. It’s like a checklist. I run through it every day and in my mind I mark off what I’ve done.”

Now he starts his daily routine by hitting off a tee in the indoor batting cage, starting with the tee sitting high and gradually moving it down.

“Left-handed, I just stay away, I don’t really come in because I know I can hit the inside pitch,” he said. “Right-handed, I start in, and then work my way away so I can feel my hands inside the ball.”

After taking batting practice, he goes to the outfield and takes balls off the bat in left field and centre.

“I’ll shag probably about 10 balls off the bat, and the ones I’m not actually running after I give it a little first-step jump just to get myself going in the right direction,” he said.

“You never know what the game’s going to bring but at least if your focus on your work is consistent, then it should help you going into the game,” he said. “To this point, it has, definitely.”

I asked him how his new routine differs from his old one.

At 23, Pompey still has time to blend his considerable talents with the mental discipline required to make another push toward the big leagues. He is enthusiastic about his new routine, but that in itself offers no guarantee of long-term success. While change can stoke a player’s sense of well-being, the trick is to sustain both the routine and the success.

“Dalton didn’t panic when he was struggling early this year,” Allenson said. “He has a different look on his face this year than he had last year. Last year when he came down, initially he was OK, but then all of a sudden he had that look like he was having no fun. I haven’t seen that look this year.”

In April last year, Pompey’s tentative play on defence set off alarm bells. He has exceptional speed, but often lost that edge with poor reads off the bat. This year, his manager said, Pompey has worked hard to improve his defence. “He’s a lot better now,” Allenson said.

Pompey says he’s better in all facets of his game. He insists he has learned to stop wishing he were a Toronto Blue Jay and to concentrate on doing his best as a Buffalo Bison, and to focus more on the process than the results.

And he’s grateful that Gil Kim stopped by for that conversation.

“I thank Gil, and I also thanked Ross Atkins for hiring Gil,” Pompey said. “This was one person who really cared about me and saw things in me that I saw in myself, but it’s always nice to know that other people see it in me too. He didn’t really have to reach out like that, but for me individually, it went a long way in terms of creating my own routine and putting myself in the best possible situation to succeed.”

Allenson, who has managed in more than 2,600 minor-league games over 21 years, is encouraged. He is also not jumping to any conclusions.

“Dalton’s been good, but now he’s got to keep it going,” Allenson said. “Wait until the end of July and in August. You come to the ballpark tired. It can be tough to get it going. But when the game starts, that’s when the mental clock turns on and you have to show you can compete.”

That, says Allenson, will serve as the true test of Pompey’s new routine.