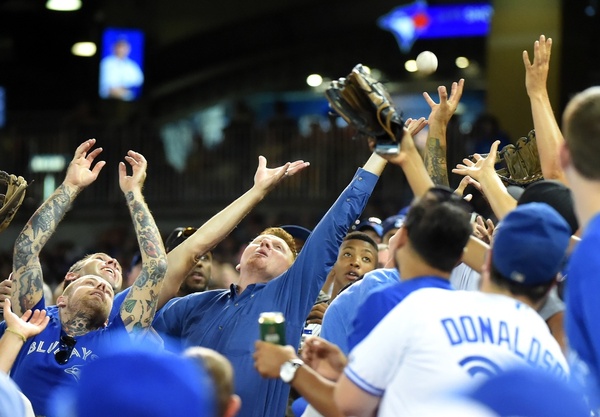 It doesn’t usually take a lot for me to start railing about what the Blue Jays and their fans get wrong about the experience at the Rogers Centre — *COUGH* *COUGH* — and how it could be better, but during Wednesday night’s win over the Rays, it actually started with something I think the club is doing well. (Or at least smartly, despite the fact that it’s also kind of gross.)

I’ve been on a flex pack this year after years with a Ballpark Pass, so it’s been a while since I’ve thought too much about what the price of a walk-up ticket, and wow. That sure is the club’s new dynamic pricing policy at work.

Somebody chimed in to tell me that a ticket in the 500s is even more expensive, $32.50, on Saturday, which truly speaks to the amount of money left on the table by the club in August and September of last year, when ticket prices were fixed from the beginning of the year.

If that’s money that gets ploughed back into the team, that’s a trade-off I can certainly live with. And perhaps the Jays’ behaviour at the trade deadline suggests it is — I can certainly envision the meetings Mark Shapiro says he had with upper-level Rogers executives being about revenue projections that would justify some of the money they took on.

But of course, there’s more the club can do to make things better than simply putting a better product on the field, and last night, continuing in the spirit of the tweet above, I threw out some ideas on exactly that — starting, as you might expect I would, with what is easily the most ridiculous affront to our fandom going:

Hooked on a Feeling remains a pile of shit, in case you were curious.

It’s true! And it remains utterly baffling that the Jays continue to foist this canned garbage onto their fans in hopes of creating something like the Red Sox have in Sweet Caroline.

Shi Davidi hit the nail on the head on this one last night:

Major in-game upgrade for #BlueJays: ditch the Hooked on a Feeling abomination stat and rotate a different Tragically Hip song every night.

My response to this was that in most years that suggestion would have been awfully cheesy in its own right — not to mention a little too dad-rock for a song that in an ideal world would maybe reflect the diversity of our city better (not that Hooked On A Feeling does!) — but, obviously, given what’s going on with Gord Downie and the end of this iconic Canadian band whose music means so much to so many people in this country, having the Blue Jays storming to October and beyond with 50,000 people belting out songs by the Hip every night? Holy shit, yes.

And, as I noted at the time, another beautiful thing about this is that I’m pretty sure it would catch on organically — the way this stuff is supposed to do. And not have to be limply shoved down our throats every night in the hopes that one day maybe the indifferent majority will suddenly embrace it with the same kind of enthusiasm as the four people who love it and all of the rest of us who groan at the first note in its symphony of schlocky shit.

OK, so maybe I really don’t like that fucking song very much.

Speaking of glue, I am no mere one-trick pony. I had even more ideas to improve things than just ridding ourselves of that embarrassing song. For example, as fans were filing out of the stadium, with the Red Sox and Yankees tied at 4-4 late, and the Orioles just getting started in Oakland, I laid this one on ’em:

Or maybe even better, we could have this:

@AndrewStoeten @BlueJays Optimally roping off from the Dome to the brewery, setting up a projection screen, and selling @SteamWhistle to 2AM

This works too. “Synergy” is the word. I will tell you all about it, @bluejays, in my PowerPoint presentation. https://t.co/NMIVIi7Uf6