The swing of Devon Travis is classically compact.

It features two timing tools that you have to look for to notice: a short pump of the back elbow and then, a split-second later, a tiny lift of the front foot.

Barely off the ground, his foot shifts forward a few inches, drags lightly on the instep, then flattens as the leg takes his full weight. His head stays down as his hands snap the bat through the strike zone.

His swing is so swift – “he’s got quick-twitch muscles,” says his hitting coach – that he can wait until the pitch is deep in the hitting zone before making contact. When that happens, he often lines a hit the opposite way to right field.

That has happened a lot lately. In 10 August games, the Blue Jays’ second baseman is slashing .400/.413/.689 and leads the majors in hits with 18. In the eight games since manager John Gibbons put him in the leadoff spot, he is batting .417.

Sure, small sample sizes. Here’s a bigger one. On June 11, Travis was batting .145, in consequence of a sluggish start after missing spring training, all of April and most of May during his final stages of rehab from shoulder surgery. Since June 11, he has 65 hits in 45 games, including nine homers. Over that span, he has slashed .353/.390/.576.

In the past week, his highlight reel has included a four-hit game, three of which he poked into right field, and a two-homer game, both of which he yanked high and deep to left.

“He gets ready on time – that’s number one,” hitting coach Brook Jacoby told me. “The pitch dictates where he’s going to hit it. He doesn’t predetermine. His approach is to right-centre all the time, but his timing allows him to get the bat head out front to the ball.”

When I asked Travis about that, he said his good timing and minimalist mechanics took root at Palm Beach Central High School in Florida. No big leg lift. No waggling the bat. No extraneous motion.

“I’ve always hit like that,” he said. “My high school coach (Scott Benedict) was really big on it. He always preached that you have to have your foot down before the pitcher releases the ball.

“I used to put it down way early. As time went on and I got to college, I found that if I got ready too early, guys would start flipping (off-speed) stuff and I’d be out front and off-balance. What I’ve learned is, there’s like a rhythm to it. Even if I get it down early, there’s got to be some continuous motion.”

In his short major-league career, he has refined his approach, learning to adapt his timing to the pitcher he is facing.

“Take (Hisashi) Iwakuma of Seattle, his delivery is really slow, so I have to figure out my timing on when I’m going to get ready to hit,” he says. “And then a guy like Tyler Anderson from Colorado, he gave me a pretty hard time because he does some herky-jerky stuff. When I get my foot down depends on the pitcher.”

Travis was hardly a can’t-miss prospect when the Blue Jays acquired him from Detroit in November 2014 for Anthony Gose. It turned out to be a steal of a deal. Gose had a decent season for the Tigers last year, but then, owing to poor performance and bad attitude, he has spent most of this year in the minors. He is batting .225 for the Double-A Erie SeaWolves.

Travis also knows Erie. That was the last team he played for before joining the Jays and winning a starting job out of spring training last year. He took off in April, but a mysterious shoulder injury limited him to 62 games and required two surgeries to fix. Given his hot start, and the way the team finished without him, it was an agonizing year for the young second baseman.

So Travis had something to prove in 2016. Was he really as polished as he looked last year, when both his hitting and defence surprised many observers? Could a pigeon-toed, 5-foot-9, second-year player pick up where he left off before an injury stole his rookie season? 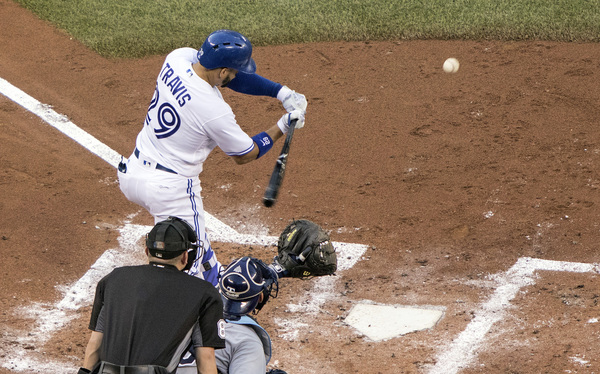 With his quick swing, Travis lets the ball travel deep into the hitting zone. On Wednesday, he singled to right field on this pitch.

He is an affable sort, popular in the clubhouse and always accommodating when a reporter comes calling. Ask about his swing, and he will happily break it down. Ask him how he managed to deliver a clutch hit or make a dramatic defensive play, he often smiles sheepishly and manages to shove gee-whiz and aw-shucks into the same sentence. One of his fallback lines is: “I kind of blacked out.”

He used that line when discussing the 14-pitch walk that led to him scoring the winning run on a wild pitch on July 26. He used it again after he made a most unusual play Monday night – throwing out a runner trying to advance from second to third on a ground ball.

What happened was that he threw a laser of a pass that led Josh Donaldson perfectly as Donaldson scrambled toward third base. Donaldson swipe-tagged the runner before either of them reached the base.

“I always look up just in case the runner’s going,” Travis said. “I said, ‘I think I’m going to do this.’ That was just a crazy play. I may never do that again in my career.”

Travis is quick to credit his coaches and veteran teammates like Donaldson and Troy Tulowitzki with helping him learn the secrets of big-league success. I asked Jacoby, the hitting instructor, about their coaching sessions.

“It’s just trying to keep things simple with him, really,” Jacoby said. “His swing works. Pitchers try to go after him a little different sometimes, but if he stays on the fastball – his timing is set up for the fastball – he can hit anything they throw up there. Be on time for the fastball, and your recognition will be good for everything else.”

At the plate, Travis tries to stick with what works. Take that teeny step and get that foot back down on time. Focus on hitting the ball up the middle and to the opposite field. (More than 70 percent of the balls he hits go that way.)

On Monday night, he came up with two outs and the bases loaded in the seventh inning. The Blue Jays and Rays were tied 4-4, and the Jays, who had squandered several scoring chances, were staring frustration in the face again.

Travis smacked a single up the middle off Dylan Floro to break the tie. The Jays won 7-5.

“That guy had some good stuff,” he said. “He had some late sink. I’d never faced him. Actually, I faced him in low-A ball when he was a starter but he wasn’t anything like he is now. The first two pitches I took, I was like, ‘Crap, this guy’s got some good stuff.’ I found myself down 0-2. I honestly was just doing my best to battle and thankfully, it went through.”

He paused and smiled.

“Sometimes,” he said, “I don’t understand how it even happens.”