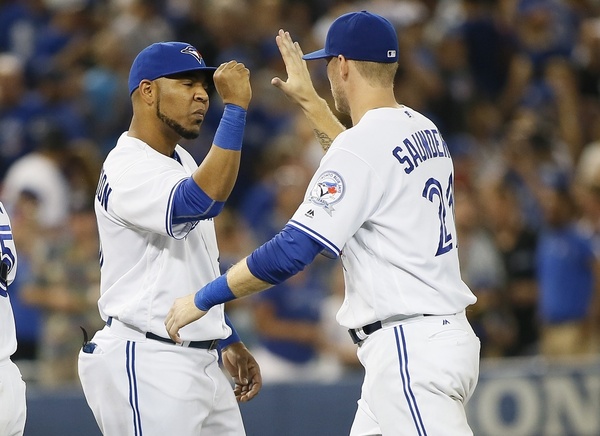 If I’m totally honest with myself, this is my least favourite part of the baseball season.

Once we crest over the one hundred game mark, settle into the final third, and see October in the distance, I find myself exhausted more often than not. Unless my team is totally bottoming out (or twelve games up like the Chicago Cubs) I have legitimate emotional roller coaster fatigue. I long for extreme blowouts and short and sweet pitcher-driven wins, mostly because I need a reprieve from how much baseball has consumed my entire life since April.

It’s not that I love the game any less in August, it’s just that this is the month where I really start to notice that loving it is a lot of hard work. “It’s early” has aggressively become “it’s getting pretty late.” I resent the way caring about how Baltimore is doing in Oakland has decimated my sleep schedule. I’m embarrassed that I’ll likely sneak into the bathroom at one of my closest friends’ wedding to find out how the Jays are doing in Cleveland. In general, I miss making social plans without obsessively checking the MLB schedule.

“I’d really like to, but the Jays are playing the Orioles that Tuesday, and I need to stay home and watch it while eating a hastily prepared meal.”

Of course, meaningful baseball is an excellent problem to have. I’m certainly not complaining about the Jays being a battle-it-out-at-the-top-of-the-AL-East contender, I am simply saying that it’s okay to admit at a certain point it becomes a lot to bear. In comparison, if you’re a Braves fan (24.5 games back,) or a Reds fan (25.5 games back,) you’re probably feeling pretty relaxed right about now. I mean, you’re definitely not happy, but you’ve likely settled into sore inevitability and are probably just enjoying the baseball as it comes. Hell, I’ve seen a lot of Yankees fans look at those seven games and submit to total resignation, just existing in a blissful, non-competitive love of the game.

Despite how wonderful baseball is, it’s also never afraid to remind the hopeful how truly (and indiscriminately) vicious and unpredictable it can be. Yesterday we saw Prince Fielder, who is recovering from his second spinal fusion surgery in the past three years, say goodbye to it for good. “I can’t play Major League Baseball anymore,” he said, clearly choked up at a press conference where his sons, seated next to him, hung their heads in sadness. You’d have to be heartless not to be destroyed by that image, and the cruel randomness of it all. Nobody deserves that outcome, especially not someone as universally beloved as Fielder—the kind of player that transcends team allegiances when it comes to fan admiration and respect.

Later in the day, outgoing legend David Ortiz was helped off field after taking a foul ball to the shin, which had some weary 2.5-games-back-Red Sox fans dramatically declaring the season over. (It may be easy for us to rejoice at that notion, but there’s also a warning in there that something so arbitrary could come for us as well.) Ortiz’s shin is not broken, and he’s considered day to day, but the loss was a particularly demoralizing one that involved a laundry list of worst fears.

And then there’s Jose Bautista’s return to the disabled list yesterday, where he joins fellow outfielder Kevin Pillar. The whiplash is certainly not good news for Blue Jays fans or their morale—only last week we were rejoicing in his triumphant return and the symbolic might it suggested, and now with that sprained left knee, we’re back to worrying all over again. “Oh yeah, it’s extremely frustrating,” Bautista told the media. “Especially after an off-season where a lot of hard work went into getting my body ready and hopefully avoiding these types of situations, and having it happen on two freak injuries, or freak accidents, it’s pretty disappointing.”

Nothing is guaranteed. So many outcomes are possible. Things that are definitely within our team’s reach are also totally, terrifyingly uncertain. (That may explain why so many are apt to complain when there’s really not all that much wrong to complain about.) The reality is, being so close to something and not being able to obtain it is its own unique kind of torture, and I think in the back of our dog-tired minds, with the memory of last year’s post season still fresh, we collectively fear that possibility.

They can do it. Will they do it?

We all know “it’s a long season” is a phrase used to celebrate the endless potential of baseball. It’s something that’s said when you doubt the underdog, or lament that your team is not currently in first. Anything can happen and anything does—and I certainly wouldn’t have it any other way. But when it’s the middle of a hot, sweltering August, and your team is in first by one tenuous game, you can be forgiven for wishing it wasn’t so long at all.

I’m with Gibby on this one: “September can’t come fast enough.”