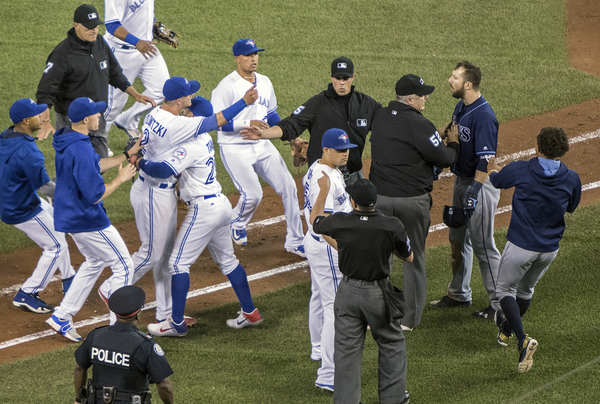 The Blue Jays’ second-shortest game of the year ended with Kevin Pillar intercepting a laser shot on the warning track, and the crowd cheering like crazy, and Russ Martin heaving a sigh of relief and paying Steven Souza Jr. a compliment, and Souza thinking Martin had insulted him, and Troy Tulowitzki taking a long run at Souza when Souza started yelling, and 5-foot-9 Devon Travis leaning into the 6-foot-3 Tulowitzki in a cartoonish attempt to confine the dispute to harmless vulgarities.

Which Travis did. He is short but strong.

The mini-melee ended without a blow being struck. Misunderstandings were tranquillized. Everyone got to go home early. And the Blue Jays beat the Rays 3-2 to hold their ground in the AL East race.

This one had Blue Jays fans feeling edgy all night. And just when it looked like Toronto had it won, with Roberto Osuna celebrating an apparent game-ending strikeout, Martin could not squeeze a foul tip.

Souza and the Rays had life. Osuna had to abort his post-game prayer and go back to work. OMG started to pop up all over Toronto Twitter feeds. Fans in the stands resumed wringing their hands.

“I was thinking I hope it’s not one of those situations where you think the game’s over and the next thing you know the guy hits a two-run homer to take the lead,” Martin said. “That’s what’s going on in the back of my mind.”

“I hope I don’t miss in the middle and lose this game. That’s what happens when you do that,” he said, meaning celebrating too soon. “But to be honest, I didn’t see when Russ dropped the ball. I didn’t try to make anybody offended or do anything to make them feel bad.”

Osuna was hitting 98 with astonishing consistency that inning and on his next pitch he hit 98 again, but he overthrew and the pitch was high. The count was 2-2. The fans were on their feet.

Osuna fired again. The scoreboard read 96. When Souza connected, it sounded like a rifle shot.

The crowd gasped. Pillar started to run to the wall in centre field. Martin and Osuna thought it was gone.

Then, the ball lost a little momentum. Pillar pulled it in. Osuna said another prayer of thanks.

The game was over. But suddenly, Souza was yelling and Tulowitzki was yelling back as he sprinted across the diamond toward Souza. At that, the benches emptied, neither side knowing what the hell was going on, but obligated by precept and example to go into melee mode anyway.

Josh Donaldson, who had the night off to rest his aching body, was in the clubhouse. When he saw on TV what was happening, he rushed to the dugout, pulling on his pants as he ran. By the time he reached the top step, a truce had settled in, so he retreated.

Martin said it was all “just a misunderstanding.” Tulowitzki seemed to be the only participant who was truly enraged. Souza was angry but also confused. 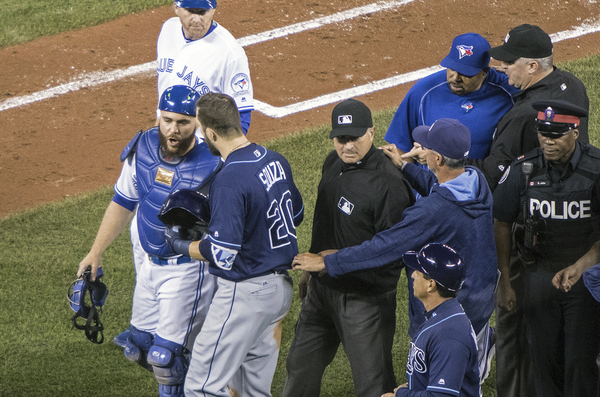 “He was probably like in defensive mode because he didn’t run or something,” Martin said. “He’s probably thinking that I’m saying something about that, that he didn’t run out of the box. But I just told him he crushed that ball, I thought he got it (for a home run). And before I could really get my message across, Tulo jumped in and was like a ball of fire. But in the end I got to tell him, ‘Hey, you did crush that ball.’ And he said, like, ‘Yeah I know.’ And that was it.”

Finally blessed with clarity, Souza gave Martin a little pat on the helmet and joined the march of the defeated to the visitors’ clubhouse.

“We’re fine,” Martin said. “There’s no bad blood or anything.”

The game  took two hours and 13 minutes, during which neither team could score without hitting home runs, and an unlikely hero struck the decisive blow.

The wild ending capped a tense evening at the Rogers Centre. Given the Blue Jays’ recent run of misfortune, this one had their fans fearing the worst as they kept one eye on the out-of-town scoreboard. Front-running Boston was battering Baltimore. The Jays, needing a win to stay two games back, were squandering a 2-0 lead that Jose Bautista had delivered with a homer in the sixth.

So it was 2-2 entering the bottom of the eighth when manager John Gibbons played a hunch. He sent up reserve outfielder Ezequiel Carrera to bat for Darwin Barney, who was playing third in place of Donaldson. Carrera had all of three at-bats and no hits in the previous 2 ½ weeks. So naturally, he reached out and poked the first pitch he saw down the left-field line, just fair, and just over the fence.

In the top of the inning, Jason Grilli had performed his usual routine. He says experience and research tell him that the top of an opponent’s lineup comes up in the eighth inning 95 per cent of the time. Grilli pitches in the eighth nearly that often, and there he was again, retiring the Rays’ top three in order.

The Jays, for whom runs have been scarce, led 2-0 in the seventh inning when Francisco Liriano, who had pitched magnificently, gave up back-to-back solo homers.

Then, the Jays’ jittery devotees began to sweat in earnest when 39-year-old Joaquin Benoit, pitching for the third straight day, gave up a walk. Barney booted a grounder. The Rays had runners at the corners with two out.

But Benoit escaped, and Grilli did his thing, and Osuna came in firing 98s with a vengeance.

“I know that these are really important games for us so I got to get the extra,” Osuna said. “That’s why it’s just about the energy. We’re all trying to make the postseason as soon as possible. Just doing a little extra right now.”

Boston pushed Baltimore three games back. The Jays remain stuck between the two with 19 games to go. The wild card, which nobody wants? Detroit is right there too. The Yankees are close. Tune in again tomorrow.

Among the devout in the Blue Jays’ fan base, admit it: you might sneak in a sheepish prayer now and then. As for Osuna, he prays on the mound before and after he pitches, but not for victory.

And afterward, when the crowd is roaring its praise and that infernal stadium foghorn is blaring, he points to the sky and prays again.

“I just give thanks for letting me finish the game healthy,” he said, “and letting me help the team.”

He did it again against the Rays. It took an extra prayer this time, but he can be forgiven for that. As for Russ Martin, blessed are the peacemakers.