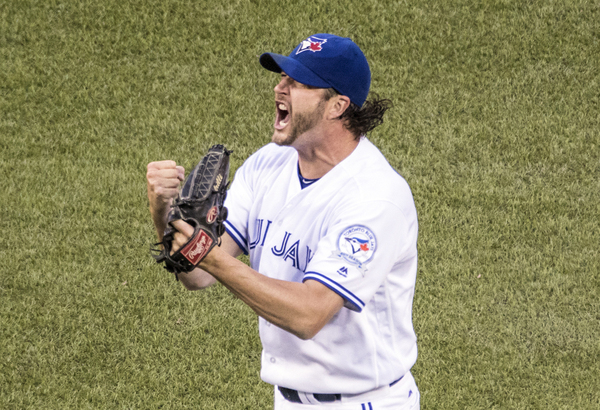 With two outs in the eighth inning, nearly 48,000 fans in the Rogers Centre were craving two conclusions: a strikeout by Billy Butler and Jason Grilli’s ferocious dance of jubilation.

There was no score, but Grilli had just given up a triple to a speedy Yankee. Everyone was standing, clapping, roaring a plea in unison: “Let’s go, Blue Jays.” The stadium shuddered.

The night before, Grilli had warmed up for the eighth inning with the Jays leading 3-0. Another of his setup situations loomed; when the score is tight, the eighth inning is his. But then his offence, almost implausibly, scored four runs and blew the doors off. Grilli sat back down. Lesser lights mopped up.

Before Saturday’s game, he said Friday’s false alarm did not tax him. I asked how many pitches he needs to get ready.

He was fresh on Saturday. Marcus Stroman and CC Sabathia, the kid and the old-timer, had matched wits and pitches and bushels of ground balls for seven taut innings. Stroman had allowed one hit. John Gibbons said he had never seen Stroman pitch better, but when Stroman tried to convince the skipper to let him continue after 97 pitches, Gibbons said no. We have Grilli, he said, and then we have Roberto Osuna, and you have done yourself proud, so sit down.

Grilli is 39. His fastball velocity has dropped a titch from the 93s and 94s he used to throw. When he pitches, the scoreboard radar readings rinse and repeat: 92 for fastball, 80 for the slider.

It was a tad different on Saturday.

“I’m just emptying the tank,” Grilli said after the game. “There’s nothing to hold back. You put regular unleaded in, so to speak, (but) right now you go with the high-octane stuff.”

As the runner danced off third, Grilli needed to get Butler, a pinch-hitter. With a 1-2 count, Butler fouled off two sliders at 81 and a fastball that MLB’s Gameday fastidiously clocked at 93.4. With each foul ball, the fans let loose a loud sigh, swallowed hard and revived their chant.

The next pitch was Grilli’s high-octane number. It came in at 93.5. Butler swung and missed. Grilli leaped and bellowed and banged his fist against his glove and then hopped off the mound and did it all again, and the fans locked that image and that deafening din into that magical memory bank reserved for meaningful September baseball.

The Blue Jays do not score many runs these days, and they’re especially stingy when Stroman pitches. In three of his past four outings, they have scored no runs while he was in the game and in the other start they scored two. But after an up-and-down season, he has started to settle. In his past 12 starts, his ERA is 3.07. His team won only five of those games.

Stroman was magnificent against the Yankees. All of his pitches worked. Only one Yankee batter reached second base, and that was on a passed ball.

Stroman is a New Yorker, and he acknowledged that it was a thrill to pitch against Sabathia, whom he admired as a kid. Sabathia is 36. Stroman is 25. Sabathia was a rookie in 2001, when Stroman was 10 years old, and by the time Sabathia became a Yankee, Stroman was in his late teens.

“He’s been one of the best pitchers over the last decade of baseball,” Stroman said.

But Stroman, like a lot of fans, has watched Sabathia’s slow decline and his concessions to age. He once threw his fastball in the mid-90s; now it averages 90. Over his career, he has thrown fastballs nearly 60 percent of the time; this year, his fastball percentage is 34. He has compensated by developing a cutter, which he learned from Andy Pettitte in spring training two years ago. Sometimes, when he throws it, it becomes a hybrid, and neither he nor the hitters are certain whether it’s a cutter or a slider, but he has begun to live on it, as he did against the Blue Jays.

“It’s hard to stay extremely sharp and to have that power fastball that you had earlier in your career,” Stroman said. “But he still does an unbelievable job at mixing speeds, throwing his changeup, keeping guys off balance. And it shows you just how good he is, that he’s able to do that with less velocity. Guys still come into the dugout extremely frustrated with the sequences he’s throwing and with the location.”

The Yankees were saying the same about Stroman.

After Grilli finished off Butler, Tyler Clippard replaced Sabathia on the mound and retired the first two Blue Jays he faced. Then Josh Donaldson singled and moved up on a wild pitch. For the second game in a row, Edwin Encarnacion walked to fill an open base. On Friday night, the walk was intentional. This time, Clippard followed orders not to give Encarnacion anything to hit.

On both occasions, Jose Bautista was up next. On Friday, he whacked a two-run double. On Saturday, he hit a home run into the left-field seats. According to Gameday’s meticulous stats, the ball left the bat at 111 miles an hour and travelled 402 feet. For the Blue Jays, the meaningful numbers lay in the 3-0 lead.

It held, thanks to Osuna’s 35th save.

By his standards, Bautista’s production this season has been modest, in part because of lengthy stretches on the disabled list. But lately, and perhaps in the nick of time for the Blue Jays, he has revived his old habit of generating big hits in big moments, as he acknowledged when he met the media after the game.

I asked him whether he could account for the improvement.

Well, yes, of course. How about those injuries? They must have messed with your timing.

“Do I feel better physically? Yeah. Does that help? You know, probably,” he said. “But I’ve played nicked up for the last five, six years of my career – for the whole bulk of my career. That’s the way we all play, and I’ve had success before, so I’m not going to use that as an excuse.”

In his past nine games, Bautista is 11-for-35 (.314) with three doubles and two homers. He has reached base in 31 consecutive games.

With the 3-0 win, the Jays held tight to the first wild-card berth. The Red Sox, of course, won again. Toronto has two more games with the Yankees, then three with Baltimore, then three on the road in Fenway.

The Blue Jays must rely on pitching because they cannot rely on scoring, and they need their starters to get them to the seventh inning, which belongs to Joaquin Benoit, who sets up Grilli and Osuna. Without Benoit and Grilli, “we’re probably planning for the off-season,” Gibbons said.

The work of those two 39-year-olds has been a surprise and a godsend. They have brought order to the bullpen and underscored an oft-ignored fact: closers get the glory, but often the most important outs come before the last inning.

“Sometimes,” Grilli said, “a save is when stuff’s on the line.”

As it was on Saturday, when Billy Butler struck out and Grilli roared with the crowd and the Blue Jays gave their fans a game to remember.