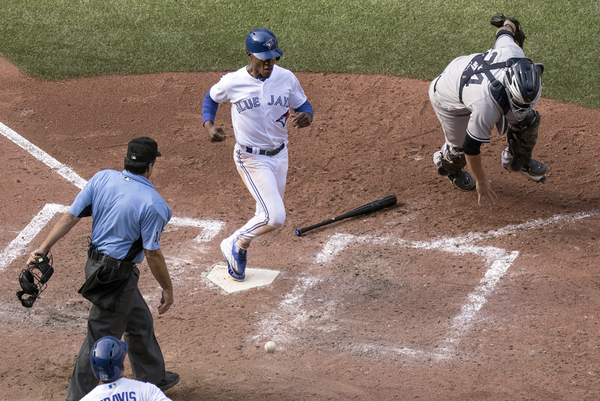 Marco Estrada loved this. Tight game. Big comeback at the end. The good guys won. And let us not forget about those bunts.

“Great game today,” the Blue Jays starter said. “Well-played baseball. We bunted a few times, which was huge. I like seeing these things. We don’t always need a homer to win these games. It was a fun game to watch.”

Estrada’s observations might not quite pass muster on those truth meters the U.S. media are using these days. Let us test his truthiness.

1. Fun? Sure, it was fun at the end, for Estrada, his teammates and nearly 48,000 excited and emotionally drained fans at the Rogers Centre. The Blue Jays blew a late lead in the top of the ninth and regained it in the bottom half and won 4-3 on a little bitty hit by one of their sluggers.

2. Well-played? Those last few innings had some messy moments, especially for the Yankees and Dellin Betances, their towering, pratfall-prone closer.

3. No need for a homer? They needed one from Jose Bautista in this game, and for six innings, it was the only run on the board.

4. Those bunts? Well, there were two, and a couple failed attempts in questionable situations, and the last of the bunts, by Ezequiel Carrera in the bottom of the ninth, worked out nicely for the Jays because it squeezed home the tying run. Pitcher Tyler Clippard ran up to it and used his glove like whisk broom. His errant swat forced catcher Gary Sanchez into a clumsy cartwheel as the ball scooted past him and Melvin Upton Jr. scored standing up.

Manager John Gibbons said later that he did not call for the bunt and then sort of said it wasn’t a good play by Carrera even though, you know, it turned into a good play for the Jays.

“You never do a squeeze with no outs,” Gibbons said. “Too many bad things can happen.” Then, just to have it both ways, he added: “Zeke, he can handle that bat with the best of them.”

When Zeke bunts, that is. Zeke is batting .160 since the all-star break.

So Zeke was bunting on his own.

“You always try to bunt for a hit,” he said, “but my intentions were just to move the runners.”

In one glorious at-bat, Zeke achieved everything he set out to do.

Such accomplishments were rare for the Blue Jays’ batters, save for Jose Bautista, who is hot these days. He hit a homer and singled home a run to give Toronto a 2-1 lead in the eighth.

Attentive fans know Bautista has had his struggles this season, but give Estrada 100 per cent on the truth meter for his assessment of the former home-run king.

“I don’t care how cold or hot he is, he’s dangerous no matter what,” Estrada said. “Just seeing his name in the lineup, I know it puts fear in the other team.”

Gibbons: “I just think he came back from his injuries, got some at-bats under his belt. He’s just doing what he’s always done his whole career.”

A homer, RBI single and two walks attest to that.

But the Jays are averaging 3.86 runs per game in September. They stranded 10 more runners on Sunday. So Gibbons is showing he’s willing to try anything.

Which might explain why he sent Kevin Pillar up to bunt in the seventh with two on and nobody out. Pillar did move the runners – with Carrera, arguably the worst hitter in the lineup, coming up next. Carrera struck out. So did Devon Travis. The score stayed 1-1.

In the ninth, Gibbons told Pillar to bunt again. Upton was on first. Pillar fouled off two bunt attempts. After five pitches, the count was 1-2. On 1-2 counts, Pillar strikes out once in every three tries. This time, he reached out and poked a single to right field.

Upton raced to third, whereupon Carrera supplied the bunt that that turned the Yankees into knots. Clippard’s error put Pillar on third and Carrera on second.

Three batters later, the bases were loaded for Edwin Encaracion, who has 42 homers and a .902 OPS. When Encarnacion connects, he pulls the ball to left field 53% of the time. It figures then that he would reach out and poke a ground ball into right field that was flagged down way too late by the second baseman. Encarnacion’s walkoff bouncer inspired Josh Donaldson to lift him off the ground in a bear hug before everybody else piled on and the raucous crowd joined in celebrating a third straight win over the Yankees.

“Eddie beats you in a way he normally doesn’t beat you,” Gibbons observed. “Just takes the little cheap single the other way. They shifted. It was wide open over there.”

It was a bad day for Betances, the Yankees closer by default after the departure of Aroldis Chapman and Andrew Miller..

In a 1-1 tie, Betances came in hot in the eighth, his fastball hovering around 100 miles an hour. His first batter, Donaldson, missed a fastball at 99, took two balls at 99, then missed a heater at 101. Betances topped 100 on the next two pitches but couldn’t throw another strike.

Then he paid Donaldson no mind, so Donaldson got a huge jump and stole second. Two batters later, Bautista singled him home and the Jays went up 2-1.

Then, Betances began to pay attention, because Dalton Pompey was pinch-running for Bautista. Everybody knows that when Dalton Pompey is pinch-running, his job is to steal second. Instead, Betances stepped off the rubber and found a sheepish Pompey standing stock-still halfway to second base.

Here, Betances forgot a rule that his coach probably drilled into him back in high school in Brooklyn. Run directly toward the trapped runner. When he commits one way or the other, throw to the appropriate defender. Betances did not move. Then he decided to throw to first. Pompey took off for second and made it without a throw.

Pompey did not score, but that was one extra out Betances had to get.

In the ninth, he walked Upton to start the inning and was done.

“I got ahead on Donaldson and Upton and I wasn’t able to put them away. That cost me,” Betances said.

So the Blue Jays have a 1.5-game lead over Baltimore for the first wild-card spot, with four more home games – one with the Yankees and three with the Orioles. Then it’s off to Boston for the weekend.

Estrada, who worked seven solid innings and left in a 1-1 tie, said he and his mates appreciate the capacity crowds that keep rocking the Rogers Centre.

“This atmosphere, you can’t beat it right now,” he said. “It definitely gives us a lot of energy and it pumps us up a lot.”

Estrada was fairly bubbling, about the crowds and the pitching and yes, the offence, even after a win that pivoted on a failed bunt attempt, a squeeze play and two soft singles to the opposite field.

“Obviously,” he said, “our hitting’s been tremendous.”

Rather than curb his enthusiasm, we will not put that statement through the truth meter. This is about winning. Sunday’s scratch-and-claw tactics did the job. Zeke surely can handle that bat.