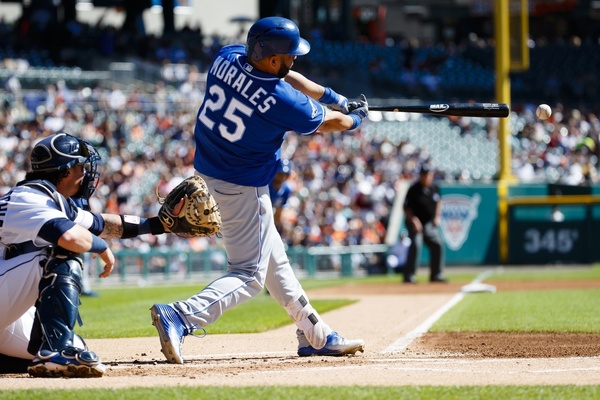 Kendrys Morales and Chris Carter had damned close to the same season in 2016.

Carter provided the Brewers with 10 more home runs, 25 more walks, and 30 extra points of slugging percentage, while Morales gave the Royals 25 more hits, 85 fewer strikeouts, and 40 extra points of batting average. Kendrys put up a wRC+ of 110 and an OPS+ of 108, whereas for Carter those numbers were 112 and 114.

Since neither player should ever pick up a glove, you could even say that Carter was a hair better than Morales in 2016. And yet the Blue Jays rushed to give Morales a three-year, $33 million contract, while the Brewers this week decided to designate Carter for assignment, choosing instead to sign Eric Thames to a three-year deal that will pay him a little less per year than the $8.1 million that Carter projected to make through arbitration.

Granted, there are differences between the two players. Unlike Carter, Morales has a long and fairly consistent track record. He’s been an above average hitter pretty much throughout his career, save for his write-off 2014 season, when he didn’t sign with a team until June (after being saddled with a qualifying offer), and the two years he missed with that celebration-related ankle injury. Morales was a much better hitter than Carter in 2015 — putting up a 130 wRC+ compared to Carter’s 104 — and because of all that he’s projected by Steamer to be ten points of wRC+ better in 2017.

Not only that, despite the 110 wRC+ overall this year, Morales actually looked more like that 2015 version of himself for a big chunk of the season. He began the year with an abysmal two months, posting a 56 wRC+ in April and May, before rebounding to the tune of a 135 mark from June 1st onward. (Edwin Encarnacion’s wRC+ for the season: 134. With a strikeout rate that jumped to 19.7% from 15.7% in 2015, and the lowest slugging percentage since his 2012 breakout.)

Shit, Tony Blengino of FanGraphs suggested last month, using “adjusted contact scores” that not only was Morales better than Carter in 2016, he was better than both Encarnacion and Jose Bautista. Morales trailed only David Ortiz in this metric, and graded better than Edwin based on the fact that his exit velocity across the board — on fly balls, liners, and ground balls — was actually superior.

Calling Morales “the DH with the most misleading traditional 2016 statistics,” Blengino was unequivocal. “Look at the differences between his Unadjusted and Adjusted Contact Scores: on fly balls (151 vs. 217), liners (83 vs. 116), grounders (86 vs. 137) and overall (109 vs. 158). OK, he’s slow, so the grounder difference might be a little misleading, but he was both hamstrung by his home park and just plain unlucky in 2016. The Blue Jays took note of this, and quickly pounced on him as a free agent. My prediction: a healthy Morales outperforms both Jose Bautista and Edwin Encarnacion, for far less money, in 2017.”

But that’s a rather Blue Jays-friendly spin. Some people will tell you — or they’ll tell me, at least (repeatedly) — that the Morales deal was a bad one. Even Ross Atkins himself told reporters on Thursday, according to a Ben Nicholson-Smith tweet, that the free agent market is proving to be “much more robust on the offensive side.”

Whatever he meant, precisely, the Morales deal, with Bautista and Beltran, Holliday, and Pearce, and Carter, and Lind, and Napoli, and Trumbo, and — oh, and Encarnacion — and a whole bunch of other guys who offer similar skills at varying prices still available on the market, maybe looks a bit odd.

@AndrewStoeten I continue to think the Morales signing was in some part tied to the Gurriel deal. (Helps me rationalize it, at least!)

@AndrewStoeten Just that Morales has a relationship with the Gurriel family (per Gammons). Maybe signing Morales helped convince Lourdes.

@AndrewStoeten Same agent too. Otherwise, I just find it weird. Why jump to give Morales three years in the beginning of Nov?

That’s a pretty fascinating idea. I’m not saying that I buy it, but — as I tweeted at the time — you do hear rumblings from time to time about side deal like that on a much smaller scale where Latin American amateurs are concerned. Though not so much when you’re talking about a giant global agency like Wasserman Media Group, which ranked fourth by Forbes this year in terms of agency commissions, and has a client list that includes Hanley Ramirez, Giancarlo Stanton, Yu Darvish, Russell Westbrook, LaMarcus Aldridge, Anthony Davis, Steve Gerrard, and hundreds of others.

That doesn’t mean they’re above it! Yet, as demonstrated above, there are legitimate reasons to maybe even like the idea of Morales.

For three years, though? The mind still kinda wanders…