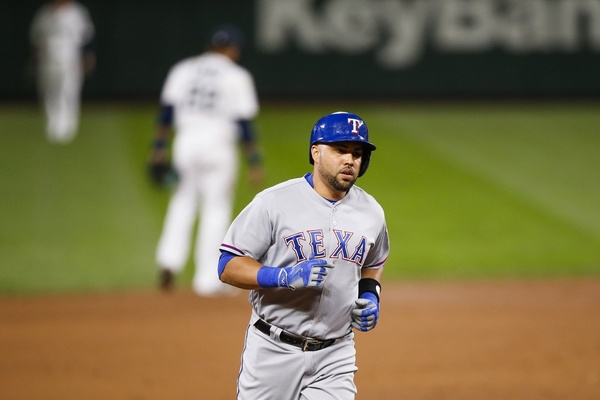 We probably didn’t want to live in a world where at least one of Kendrys Morales or Carlos Beltran was going to be forced to put on a glove and go out into the field for the Blue Jays every day.

Some days? Sure, that could have been fine. But carrying two guys who both ought to be DHs isn’t exactly ideal.

Of course, we don’t have to worry about that now. At least not with Beltran — whose bat would have otherwise looked quite nice in the Jays’ lineup — as he’s signed on to return to the Houston Astros in 2017. (Remember when Beltran was an Astro before? Holy shit he was awesome). And for just $16 million on a one-year deal, to boot!

I don’t think too many Jays fans are going to be weeping at the loss of Carlos Beltran from the free agent market, but that doesn’t mean that this deal doesn’t have ramifications for the team and how the rest of this winter is going to play out. Namely, it would appear that the Astros are now almost certainly out of the market for Edwin Encarnacion.

Of course, the Jays, having signed Kendrys Morales, are almost certainly out of the market for Encarnacion, too, but that hasn’t stopped anybody from believing there still might be a chance they’re not! (Which, so we’re clear, would be awesome). So what precisely this deal means isn’t quite concrete. But there are some things to glean from it:

– With the Astros out, the talk — from Jon Heyman, for example — is that the market for Encarnacion is down to the Jays, Yankees, “and a couple others.” A lot of people seem to think Texas would be a fit, and that’s probably true. The temptation to spend big has got to be there, given the way the Astros have been loading up, but maybe the wherewithal to keep pushing the budget isn’t there. The Rangers 2010 payroll was $64 million, per Cot’s, and in 2016 it was $158 million! Right now they’ve got $120 million on the books — even with insurance and the Tigers paying for a lot of what Prince Fielder is still owed — and if MLBTR’s arbitration projections are correct, you can add $15 million more for their arbitration eligible player, plus about another $5 million for their pre-arb guys. Meaning… it could be pretty tight for them. Especially if they want to address some of their other holes — and indeed, talks between the club and the more defensively versatile Ian Desmond are “intensifying,” reportedly. (Funny how payroll parameters don’t just impact the Jays, eh?)

– Are the Red Sox going to be involved? I can’t imagine they won’t — MYSTERY TEAM! — but not a lot of people with their fingers on the pulse of the industry seem inclined to agree. Heyman tweets that he hears they’re looking for a hitter, but not willing to “take the big plunge and make it EE.” And Rob Bradford tweets that an exec he spoke to suggests Pablo Sandoval is the Sox’ plan B now that Beltran is off the market. I’ll believe it when I see it. But maybe this means that Edwin will end up in Jose Bautista’s spiritual home, wearing pinstripes in the Bronx. The Yankees have payroll flexibility going forward, with CC Sabathia and A-Rod off the books after this year — though they may want to save some of that for runs at Yu Darvish or Jake Arrieta, both of whom will hit free agency next winter, if they’re not extended.

– Speaking of Bautista, the rumour mill sure has been quiet on him, which is pretty understandable. Jose could have filled a similar need as Beltran, or the Astros’ earlier signing of Josh Reddick, or Kendrys Morales, but it would have cost a team their top draft pick to do so (or, in the case of the Jays, the high pick they’re due as compensation if he signs elsewhere). That doesn’t mean that a market for him won’t exist — he still controls the strike zone incredibly well, and there’s reason to believe his power was sapped not-insignificantly this year by the toe and knee injuries he struggled with — but his age, his 2016 decline at the plate, his struggles in the outfield, his presumably high contract demands, and that draft pick around his neck sure aren’t working in his favour.

Bautista certainly could be an asset for the Jays — a potential bargain, even — on short-term deal that would see him play mostly at first base, but given the way they’re going to bake the loss of a draft pick into any offer they might give to him, it’s hard to see (and even harder considering some of the rumblings you’ll hear about burned bridges and Jose not being the new regime’s favourite clubhouse guy). Then again, every team is going to be baking the lost draft pick into their offer, which could be a real problem for his market. If it turns into a 2014 Morales situation (where Kendrys waited until after the draft to sign, at which point the compensation pick was off the table) and it looks like the Jays aren’t going to get a pick anyway, maybe they see reason to revisit it. But we’re still a long way from that. He’s too good a player to end up in that situation, but as much as the first half of this free agent period has mostly been about Edwin, I think the second half is setting to be about Jose.

Of course, if the Jays would just sign Dexter Fowler, who would even care about that? *COUGH*