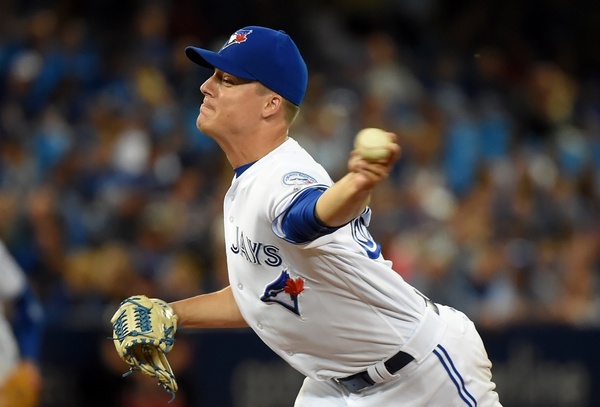 Left-handed relief pitching has been a problem for the Blue Jays for quite some time now. From their great 2015 season, all the way through 2016, despite the need becoming rather glaring, they were unable to find anybody dependable behind Brett Cecil. And now, of course, Cecil is gone, having signed a four-year, $30.5 million contract to pitch for the St. Louis Cardinals.

That’s not an unreasonable average annual value for what Brett Cecil is, but four years is a lot in the life of a reliever. The Jays reportedly were willing to offer him three years, but evidently they weren’t willing to do quite enough.

Marc Rzepczynski just got a two-year, $11 million deal from the Mariners. That’s a decent amount of change for a guy who pitched just 47.2 innings over 70 appearances — and for a club like the Jays, who are aiming to spread a limited amount of dollars around to differnt positions.

Right now, per Cot’s, the Blue Jays have $121.3 million committed to ten active roster players (plus recent Cuban signing Lourdes Gurriel Jr.). Per MLBTR’s projections, they’ll have to spend another $7.5 million on their arbitration eligible players. Add another $5 million for their pre-arb players making the league minimum and they’re looking at something in the $130-135 million range already accounted for. If payroll is going to rise to something like $160 million, that means they may only have $25 million left to spend.

Do they want to spend something approaching a quarter of that on a pitcher that’s practically a LOOGY?

I sure as hell hope not. And as much as the notion will make the vast majority of Jays fans groan, I don’t even think they necessarily have to.

Enter the much maligned, and often rightfully maligned, Aaron Loup.

Fans have memories and construct beliefs about players, and when it comes to Jays fans and Loup, neither their memories of or beliefs about him are very good. There have been a lot of gut-punches over the years when it comes to Loup. He has a tendency to be a little too wild for the tense kinds of situations he’s brought into. His pitches will sail to the backstop, or not break enough to avoid hitting the batter. Bad things tend to happen.

And yet stats don’t have those kinds of biases. They can certainly have different kinds of biases, and they can be spun in one way or another by, for example, a baseball writer trying to defend Aaron fucking Loup for some reason. But I don’t know. Let’s look at some stats!

When in the big leagues over the last two seasons, Loup has struck out 24.6% of the batters he’s faced. That’s more than Rzepczynski (23.3%), and while it’s less than fellow lefty relievers Boone Logan and Jerry Blevins (both of whom are free agents), Loup has walked batters at a considerably lower rate, which vaults him over Logan by K-BB%, and puts him just a little behind Blevins. And while Loup has developed a reputation for hitting batters, he’s not so different than Rzepczynski and Logan in that department, having hit nine to their seven each. (Blevins has only hit 1 in that span).

Loup has the second-lowest hard contact rate in that group over the past two years (trailing Blevins 24.8% to 26.4%) and the second-highest soft contact rate (trailing Logan 23.8% to 22.2%). He’s been plagued by the long ball (20% HR/FB%) and has an abysmal BABIP (.340 — though Rzepczynski’s is worse at .353, while Blevins and Logan are both below .300). But it should also be noted that his line drive rate is the highest among the group, too.

Loup’s WHIP (1.29) is in line with Logan’s and much better than Rzepczynski’s (1.56), and his fielding-independent numbers are pretty solid: a 3.88 FIP, though that’s the highest of the group, and a group-leading 3.12 xFIP, which is because xFIP nomalizes his nasty home run rate. SIERA likes him better than the rest of the group (2.67, with Blevins at 2.95 being the only other below 3.00), and he grades out just a hair below average (though better than Rzepczynski) by RE24 (a measure of runs allowed above or below average based on the actual game states he pitched in).

And, in fact, Loup’s two-year RE24 is dragged down by his especially terrible 2015 — a season in which he had 11 meltdowns to just 10 shutdowns, but I think, at least anecdotally, was hurt not insignificantly by poor defence occasionally his own) and bad luck. In 2016 he was average by RE24.

None of which is to say that Loup has been great, or even good, or that anybody should be cheering for him to take the ball in meaningful situations. There are other lefties than these guys out there, and there are other stats to look at that might not make Loup look quite so ordinary. But I do think that it’s worthwhile to point out that while a lot of Jays fans think that the team should be going out and finding themselves some kind of passable left-handed relief option and paying him at the market rate just to make sure they get something there, the fact seems to be that they probably already have a passable left-handed relief option, it just happens to be one that fans think is an inedible shitwich of a turd waiting to happen. Uh… or something like that.

They think he’s bad, I mean. And he kinda is! But not so bad that it would be worth paying $5.5 million per year to Marc Rzepczynski just to push him farther down in the pecking order. Or probably any of these other guys either.

Step right up to Uncle Loupy’s Wild Ride, kids! If you’re gonna have to live in trash, it might as well be your own.