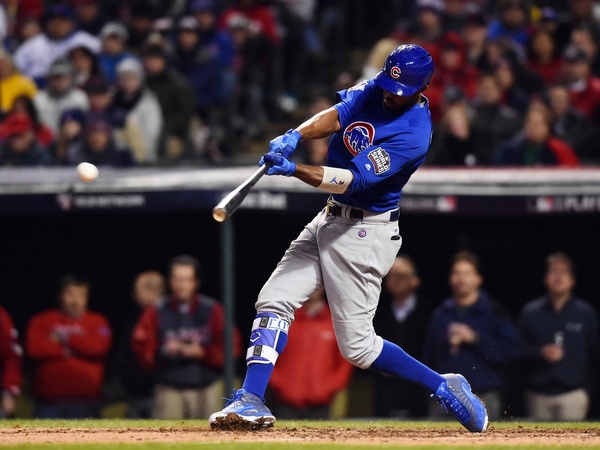 The good news? The Jays and Dexter Fowler’s camp are indeed talking!

That’s obviously excellent, because Fowler sure as hell fits a need for the Jays, being a switch-hitting good defensive outfielder who gets on-base at a very tasty clip. I’ve written about what a good fit he’d be for this roster a few times recently, and it’s still the damn truth. In fact, based on the contract it seems like he’ll get, the way that he fits the roster, his age, and his 2016 season, I think he’s clearly a better target for this club than Edwin Encarnacion. (Even if I’d take EE back in a heartbeat, because it’s Edwin).

The bad news, though?

You probably already read it in the title. The two sides are “still apart.” Which at least doesn’t mean that they’re “not close,” but doesn’t certainly doesn’t make it sound like this saga is going to end imminently.

And not only that, Heyman suggests that the St. Louis Cardinals are still hanging around. He calls them “one other strong possibility.” And you know they’d love to pluck a free agent outfielder from the Cubs after Chicago enticed Jason Heyward to move there last winter. (Or would they? Or, more importantly, who gives a shit about NL Central dick-measuring contests?)

As I’ve maintained since the suitors for Fowler started to come into focus, it’s not often that the lure of the best fans in baseball and the history of the Cardinals is turned down for a Canadian city too-often viewed more as an outpost than the incredible, cosmopolitan place we know it is, and a team viewed as an AL East also-ran. But those are reputations that I feel are very quickly changing, so who knows?

Hey, and maybe Marcus Stroman put in a good word for the 6ix (are we still doing that?) when partying with Fowler and other big leaguers at David Ortiz’s charity event this weekend in the Dominican Republic. To wit:

Can’t explain my love for these dudes after coolin’ with them all weekend. Shout to @davidortiz for the hospitality and unbelievable charity event. Check that kick-game though! ? @jumpman23

Let’s do this already!

The sides are still apart? Sounds to me like they need to…