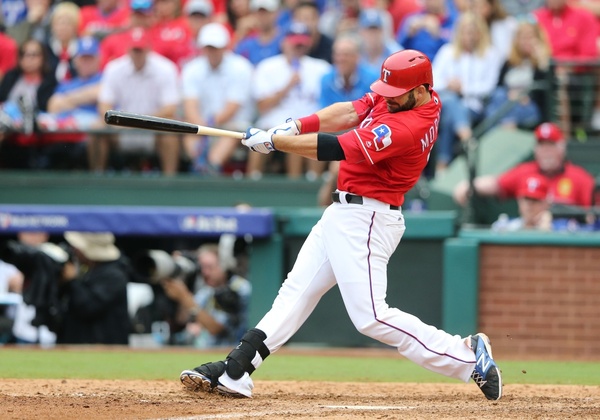 OK, OK, title jokes aside, there’s not a whole lot worse than trying to figure out a puzzling baseball decision amid a torrent of outraged fans so sure they know exactly what it means: that the team is stupid and cheap and hellbent on ruining their summer. And I think we might be getting real close to a moment like that, because Shi Davidi published a piece this evening at Sportsnet about the Jays’ interest in Mitch Moreland that reads like this isn’t so much whispering as it is something that could be — might be — maybe is — really happening.

On the surface of it Mitch Moreland sucks. There can be no doubt about that. But let’s think about this a little.

Clearly, based on the Justin Smoak extension, the Jays value something about guys who play half decent first base defence better than doesn’t show up in the publicly available metrics. And they must like something about Moreland’s glove and athleticism in particular, because Davidi’s piece suggests that they might consider giving him some outfield time as well. He’s played 41 career games in the outfield, but only six since 2011, so that’s kind of nuts. Then again, it might not be so excruciating with Dexter Fowler and Kevin Pillar taking up the other outfield spots, but holy shit, I’m really just stretching to see the logic of what smells like a tremendously bad idea.

Then again, the Jays made the ALCS with Michael Saunders and Jose Bautista logging their second- and third-most outfield innings, and those are some not-very-good outfielders right there. Then again, those two were able to hit the ball.

As for Moreland? Well… his bat is not as bad as you probably think. Problem is, he’s a lefty, which makes Justin Smoak rather redundant if not for exactly the kind of somewhat terrifying position change discussed above. Or perhaps it means Smoak disappearing.

If it’s the latter, then this is truly no big deal. Both Smoak and Moreland are glove-first first basemen who really should only ever face right-handers. Smoak put up a 99 wRC+ this year in that split, for Moreland it was 110. Last year it was 105 for Smoak, and Moreland was at 134. The year before that: 98 for Moreland, 71 for Smoak.

Moreland is better at the things you — theoretically (but not really) — want Smoak to do. So… in that way it might not be so awful. If, however, the aim is to have him platoon with Melvin Upton in one of your outfield corner spots, the prospect gets a hell of a lot more dicey. (Read: probably fucking insane.)

But I dunno. The Texas Rangers did very well with Moreland on their roster the last two seasons. Of course, they had other, better players surrounding him, but that would certainly be the case here too. If a team understands what he is and how to use him, and has the space to do so and the budget room left over to do a whole lot more, he can be… maybe not an asset but definitely fine.

If it’s all just a negotiating ruse to force somebody else — somebody better — into thinking that the Jays might be about to declare themselves out of the market for their player, having found a cheaper alternative, great!

If their interest here signals the imminent departure of Justin Smoak, and if the outfield talk is just a way to not shit on Smoak in the event that this falls through and he ends up staying, even better!

But yes, if you take it at face value and think the Jays are going to add Moreland and play him in the outfield a bunch, and also consider themselves set at first base, meaning that one of either Smoak or Moreland will have to face lefties, then sure, panic. Go nuts. Because that would be dumb.

It’s not dumb yet, though. It’s not even anything yet!