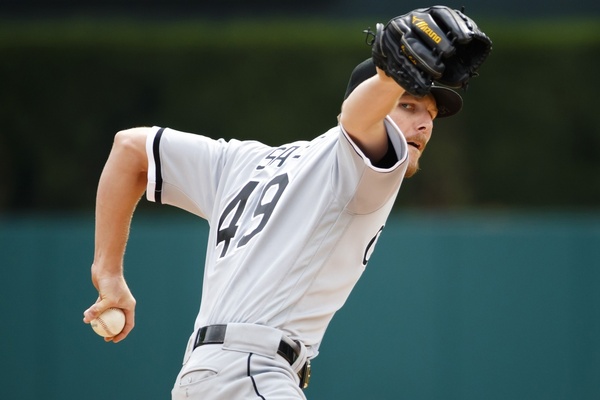 The Red Sox just got the whole MLB universe into a lather before anybody’s even played a damn game yet, and…. ugh… it’s for good reason: they now employ criminally underpaid and astonishingly good starting pitcher Chris Sale, formerly of the White Sox.

In one single move, they’ve made their team a decent slice better — something somebody should tell the Blue Jays teams are allowed to do nowadays. *COUGH*

Though… OK. *deep breath* I really don’t want to come off like some kind of pissbaby asshole here. It’s staggering the number of people who think that the way to be clever is simply to say the most putridly negative thing they can think of.

But Boston’s move does indeed warrant some negativity here. Especially when looked at in contrast with the Jays’ painfully safe off-season so far.

Of course, referring simply to “the Jays” is a bit unfair. Ross Atkins and Mark Shapiro are really just trying their best to play the hand they’ve been dealt — and if they can still land Dexter Fowler, they’ll move the needle pretty significantly in the positive direction. There is big money on this roster committed to Russell Martin, Troy Tulowitzki, and Josh Donaldson, and for the first two it feels like we’re moving pretty quickly moving into getting-paid-for-what-they-used-to-be territory. The $40 million owed those two for (Jesus) each of the next three years was the price of being good these last two — and also the price of having to cover over the mistakes that were trading for Jose Reyes and choosing to keep J.P. Arencibia over Yan Gomes and Travis d’Arnaud (not that those two are setting the world on fire, but you know what I mean).

Having $60 million of a $160 million payroll tied up in three guys makes things difficult, especially when the club moved so many homegrown arms over the past few years that they’ve had to put another $40 million on the books for Marco Estrada, J.A. Happ, and Francisco Liriano.

That’s not to blame Alex Anthopoulos. I don’t want to think about where this team would be if he hadn’t done the things that he did in 2015 — though by now, after the sell-off that would have happened last winter if the playoff run hadn’t occurred, maybe things would be already starting to look up (the new regime likely would have done very well moving Bautista, Encarnacion, and probably everything else not named Sanchez, Stroman, Osuna, or Travis, had last year landed with the usual dull thud and not an unexpected and incredible ALCS run). But that’s how we got to where we’re at. And that’s where the contrast between Rogers and the Red Sox’ ownership group comes in.

Look, I know that the Jays have really only been wildly successful for about 18 months, so it’s probably a little early to be asking them to behave like the Red Sox. It wasn’t always clear that they were going to have the same kind of success in 2016 as they did the season before, and with all the key players due to hit free agency this winter — guys who were on bargain contracts, to Anthopoulos’s eternal credit, and so not replaceable at the same dollar amount — it’s still not clear what 2017 will bring, financially. I can understand Rogers maybe not quite being ready to extend themselves too greatly to keep putting a winner on the field. Payroll is very healthy — it was at $70 million in 2011 (after post-Ricciardi paring down) and now stands to get as high as $160 million despite a weak Canadian dollar — but obviously the Jays aren’t out there pushing clubs around with their financial heft, unafraid of their margin for error because they know ownership will always give them the resources to make it right.

These are maybe odd things to be thinking about after Boston traded for Chris Sale, because his contract is so much a part of the appeal, but it actually cost Boston more than most teams to get him, because they moved top prospect Yoan Moncada in the deal. Moncada, if you don’t remember, is a Cuban infielder signed for $31.5 million in 2015, after the Red Sox had already gone over their international spending pool limit. They were taxed 100% on that bonus, bringing the total cost for him to $63 million. In other words, to land Sale’s $38 million deal, it’s actually cost them about $100 million (plus the value/cost of the other prospects on the move). It’s still a damn bargain, but it’s also very much a show of Boston’s gaudy resources.

Where that gets a bit scary, if you’re a Blue Jays fan — if it wasn’t fuckin’ scary enough already, that is — is when you think about the Red Sox and the luxury tax threshold. As I wrote last night, the Red Sox have been saying that their goal is to stay under the $189 million limit. But does adding Sale’s salary (and paying what’s left on Moncada’s deal) push them over? Because if so, a big reason to think that they’re through spending just went out the window.

The Red Sox will be taxed 50% on every dollar they spend above the threshold, which is a disincentive to going over to be sure. However, the bigger reason they wanted to stay under $189 million was because that would reset the rate back to 17.5% the next time that they do go over. If the possibility of resetting the rate is now off the table — and I don’t know if it is or not — that will certainly make a play for someone like Edwin Encarnacion a whole lot more appealing for them. (Which is just a long way of saying that it was assumed they were cold on Edwin in large part because they aimed to stay under the threshold.)

The Sox also moved third baseman Travis Shaw this morning, meaning that if they are willing to play Pablo Sandoval there, or to simply pay him to sit on the bench and use Brock Holt at third, they could rather quickly be in the market for a DH.

Were the AL East champion Red Sox to add both Chris Sale and Edwin Encarnacion this winter, it would be legitimately the worst. Sale alone going to Boston is a painful pill for Jays fans to swallow, as the Red Sox will now take one of several trash heaps at the back of their rotation and replace it with a top five pitcher in baseball. Edwin — and let’s be clear, I’m the only one actually saying this, and it’s pure spitballin’ — would just be adding insult to injury.

But again, it’s very easy to understand why the Jays front office is acting the way they are. And it’s not even that difficult to get why Rogers doesn’t open up the purse strings for them. But living in a world where the Toronto Blue Jays, with a coast-to-coast fan base, insane TV ratings, and a ridiculous wealthy market, can look at the success they’ve had over the last two seasons and consider coming up short rather than mistakenly spending a bit too much, while the Boston fucking Red Sox walk around like King Shits of Fuck Mountain?

That I don’t think I’ll ever get, nor will a lot of people.

Good on the Red Sox, though. Good on their ownership for allowing the front office to operate without fear that at any moment the financial rug may be pulled out from under them. It must be nice. (Almost as nice as how nice it’s going to be when the Jays beat the piss out of these overrated fucks next season anyway.)