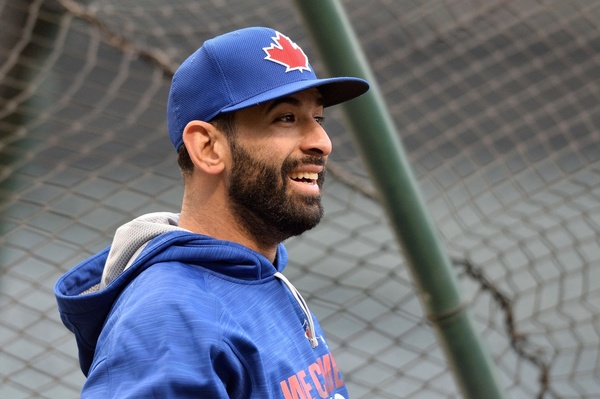 “You mean they really want to talk to ME??!?!” Photo Credit: Ken Blaze-USA TODAY Sports

Could a reunion between the Toronto Blue Jays and Jose Bautista be in the cards? Jon Heyman, via a report from Sportsnet’s Hazel Mae, suggested yes here on Tuesday evening — or at the very least suggested the two sides are talking.

“Interesting development,” he tweets. The “Jays met with Jose Bautista today and are back in talks with him.”

He adds that the call came right after Cleveland expressed interest in Bautista, and… well… yeah, there could definitely be a fit there. There is, in fact, a rather Jose Bautista-sized hole on the Blue Jays’ right field depth chart.

As I noted in my earlier Bautista piece, he’s only looking for a two year deal at this point. So… that could do. I mean, shit, they gave Kendrys Morales three!

But it’s still difficult to see how this might work for them. The Jays will be loath to give up the draft pick that they’re currently due to get when he signs elsewhere. Yes, every other team will have to give up a pick to get him, too. But If there are other clubs willing to give up a pick to sign him, that’s doesn’t exactly give the Jays a lot of incentive to up their bid and beat back these suitors. They’d be raising their own commitment and costing themselves a draft pick.

That sort of thing makes sense if you’re bidding on a player that you really want, but is that Jose for the Jays? I guess they’d be giving up a pick signing Dexter Fowler (who I’m very confident would be off the table if the Jays really did make a move with Jose), so in that sense it would be a wash, but… I don’t know… I just don’t think I see it.

But maybe I’m not basing that on anything. I do certainly think Bautista has a good chance of being a bargain for whichever team he signs for next. Especially if it’s only for a year or two. I just think that it really only makes more sense for the Jays to look at Bautista, rather than elsewhere, if they don’t think that pick is coming anyway.

And maybe it’s not! Maybe the market for him is really bad. Because it turns out it’s not entirely just age, the draft pick, the robust market, and his poor 2016 working against him.

Orioles prefer to keep draft, too, but to explain why Bautista doesn’t fit, they told JB camp: O’s fans just don’t like him

Guffaw! Might want to rule out Texas, too, if that’s really how teams think!

But — not to use this kind of thinking as too much of crutch — could this not be yet another instance of whispers coming out in order to force a decision elsewhere? Meeting with Bautista to make Dexter Fowler decide to either shit or get off the pot, for example? Or maybe Bautista’s people want it to be out there that there’s more of a market for him than everybody thinks.

Hard to tell at this stage! A Jose reunion on a reasonable contract sure would be a thing though. I’d still rather Dexter Fowler. (And I’d prefer both even more!). But it could certainly work as a Plan B. Hey, and maybe having a bit of a right-hand heavy lineup isn’t quite as bad a thing in the AL East as it seemed yesterday, y’know?