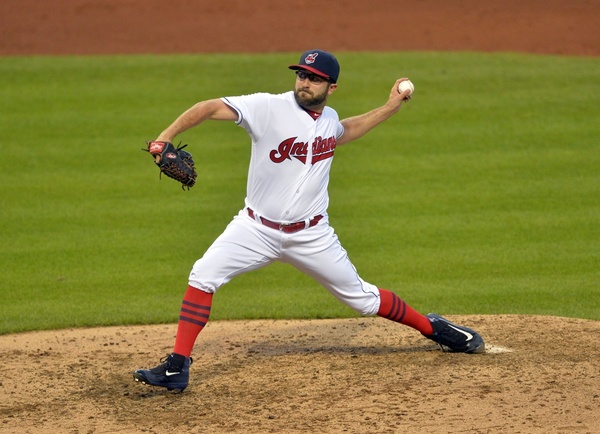 However! T.J. House is a living, breathing left-handed pitcher, and it seems like he’s Toronto bound!

Sounds like lefty TJ House is Toronto bound. #MNTwins had a tiny bit of interest.

See what I mean?

Or, OK, more likely he’s Buffalo bound (probably?). But still, he’s someone who can throw from the left side who… uh… yeah, I got nothin’.

House sits around 90, is a fastball-slider guy, spent years in the Cleveland organization (which just means that the front office knows him well and is nothing to piss your pants over, but thanks for trying to those of you who did), and… holy shit, he made 18 starts for them back in 2014, pitching to a 3.35 ERA, with advanced numbers in line with that, and a 1.2 fWAR/1.9 RA9-WAR. a 1.2 fWAR/1.9 RA9-WAR.

That actually is a pretty tidy little season, now that you mention it.

He battled shoulder troubles in 2015, which knocked his velocity down a couple ticks, but if the very small sample of pitches in 2016 were any indication, it bounced back. What didn’t seem to bounce back right away was his command, which always seemed to have at least a little of (or so says his FanGraphs page). House walked 22 batters in 102 innings in that nice little 2014 season of his, but that ballooned to 25 in just 36 innings in his injury-shortened 2015, and 43 in 75 innings last season.

So… most likely he’s nothing. But there are some reasons for optimism. He didn’t ever actually require surgery for his shoulder issues, and it seems like it may have simply taken him a little time to regain his groove. House put up some awful Triple-A numbers in terms of his walk rate in 2016, but most of that was due to a poor first half — and, especially, a month of May in which he walked 23 batters over 24 innings.

At the very least he’s a depth option for the bullpen, perhaps even a depth starter for Buffalo (though he spent all of 2016 as a reliever), and… I dunno… if you’re a left-hander looking for a minor league deal, you’re not going to find a whole lot of better opportunities than in the Blue Jays’ organization. So… sure! Go nuts with this T.J. House thing, Jays. YOU’VE EARNED IT AFTER ALL YOUR OFF-SEASON MO– I’m sorry… got a little carried away there and forgot about the title of this piece.