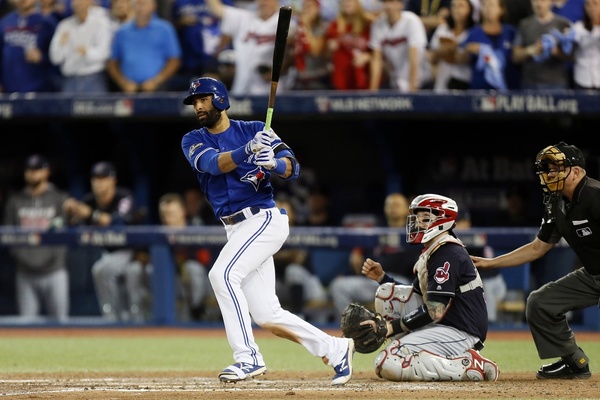 What does it mean that the Blue Jays and Jose Bautista are “engaged in active contract discussions”? I have no idea! But Jon Morosi tweeted as much here on Thursday afternoon, and damned if I’m going to look a gift horse in the mouth.

OK, OK, so I maybe haven’t exactly been dying in search of stuff to write about over the holidays here, but this is certainly worth some time. Even if it’s Morosi — who does this kind of vague thing a lot (though good on him for putting the accent on José, which my lazy ass never does and should).

So… yeah. Bautista back to the Jays? For fuck sakes, just do it already.

There’s not a whole lot more that needs to be said about this than has already been said, I don’t think. Bautista needs a home, being tied to draft pick compensation is killing his market, and for whatever his flaws may be, the Jays have been very successful with him in the outfield and the clubhouse these last two seasons.

Is he an ideal defender in right field? Holy shit no. Is he good? Nah, not even. But they’ve been able to get on just fine with him out there — in part because of Kevin Pillar’s outstanding range, and in part because of what Bautista can still do at the plate. Shit, in the season’s most crucial moments, John Gibbons and the Jays were more trusting of him out there than they were anybody else — and not without some justification. Not that being picked ahead of Melvin fucking Upton and Michael fucking Saunders is exactly an achievement, but Bautista was in right field throughout the ALCS, with those two acting as DH.

And at the plate, though there are certainly signs of age-related decline — his wRC+ has gone from 160 in 2014, to 148, to 122, and his WAR from 6.3 to 4.4 to 1.4 over that span — the scary dip he took in 2016 has things about it that would make you feel pretty good about a potential bounce back if he were, say, mid-contract. For example, thought the strikeout rate rise from 15.9% to 19.9% is troubling, his walk rate was still very much elite. He still sees well and controls the zone. His on-base was a healthy .366, and if you look at his 2016 exit velocities, you sure seem to see the results of power-sapping leg injuries he incurred in the second half.

It’s not a slam dunk that if he’s clear of those injuries a bunch of his 75-80 point drop in slugging percentage comes back. His first half of 2016 was a mess, and if you look at his ISO and SLG, there’s not a whole lot of change between the pre-injury and post-injury periods. His strikeout rate seriously spiked in the second half, and that’s not as comfortably linked to the leg and toe issues. And, despite the nice narrative woven by the injuries and exit velocity, by wRC+, Bautista’s second and third best months (at 124 and 134 respectively) were August and September — he was at his worst when he was supposedly healthy, in May and the half of June that he played in, until he caught that case of turf toe on the wall in Philly. (Because we’re obviously not going to count the ALCS, when for a week a bunch of Cleveland pitchers threw the games of their damned lives).

The question, obviously, as it has been since José turned down his qualifying offer, is what’s the right price?

A year? Two straight? Three? With a mutual option and a buyout? Vesting options?

There are creative ways to make this work for both sides, to save face for both him and — though one hopes they don’t actually care so much what the fans think and would only do the deal if it made the most sense for them — the club. And perhaps to give him the chance to potentially cash in again next winter. In exchange, of course, for a better deal now for the Jays. Or… whatever they come up with.

Is that what their alleged “active contract discussions” are all about?

Let’s hope so. If Bautista is going to bounce back in 2017, and if he needs a home and a chance to prove he’s still the player he was a year or two ago and not the one the market is trying to tell him he is, the place where he should be getting that chance is right fucking here. The team that should benefit from his presence is this one. And, if it should happen that way, the fans who should see his incredible career wind down are Blue Jays fans.

Especially since, y’know, at this point, what the hell is the alternative?