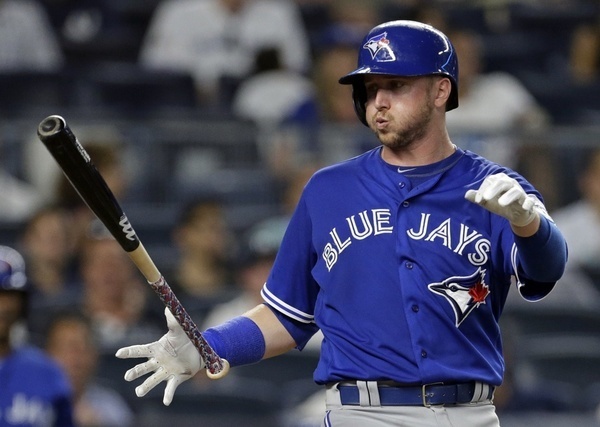 Chris Carter has signed a one-year, $3 million deal with the New York Yankees. This means we get to talk about Justin Smoak being paid $4.125 million for each of the next two seasons! A whole 2.5% of the Blue Jays’ payroll!

The easy thing to think is that Carter led the NL in home runs last year, and Smoak is bad, so the Blue Jays are obviously dumb. The reality is not nearly so simple.

I wrote back in December about how Smoak’s deal makes more sense than is maybe obvious, largely because of the importance of cost certainty. My attempt at finding the Jays’ rationale for the deal boiled down to this:

“The Jays could have had a worse player for less, but you obviously don’t want a worse player than Smoak. They could have had a better player for more, but they wouldn’t have known how much better or how much more until free agency began — and the ‘more’ would have impacted what they could do elsewhere, while the ‘better’ might not have been better enough to justify the ‘more’. Or they could have just re-signed a workable player in Justin Smoak for workable dollars and avoided having to try to thread that needle altogether.”

“So far nobody better than Smoak has signed for less than Smoak makes, and even if someone does, how much better and how much less? My suspicion, and I’d wager the Jays’ suspicion at the time they inked the extension, is that the answer to both those questions will be ‘not a whole lot.’ Especially, again, if the value of first base defence truly is greater than we realize — as Smoak’s deal, the Moreland contract, the Brewers’ release of Carter (a poor defender), the Rockies’ bizarre claim they signed Ian Desmond to play at first base, and the seeming lack of National League interest in weak glove first basemen like Edwin Encarnacion and Mark Trumbo, may suggest.”

Frankly, I don’t think it even takes this much of a leap of faith in Smoak’s glove to be unfazed by Carter’s new deal.

Player A is Steve Pearce against left-handed pitching over the last three seasons, and holy shit, he’s actually quite good!

Once again Player C is Smoak, and Player B is Carter, only this time we’re looking at their numbers against right-handed pitching.

Carter has an obvious advantage in terms of power, but otherwise they’re strikingly similar. And while power is obviously important and that difference can’t just be waved away, the gap in this split — the split that actually matters — isn’t nearly as big as their overall numbers would lead on.

Does the difference between their gloves close that gap? Not all the way according to the public metrics, but even those suggest it does a little bit — to the point where there really isn’t anything worth complaining about here. Especially since, as I’m sure you’ve figured out, Player A is Steve Pearce against RHP over the last three seasons.

Want to know another Steve Peace fun fact? Since 2007, when he made his big league debut, 73 players have logged over 1,500 innings at first base. By UZR/150, Pearce ranks 4th among them. By John Dewan’s less advanced Revized Zone Rating (RZR), which FanGraphs expains (via the Hardball Times) measures “the proportion of balls hit into a fielder’s zone that he successfully converted into an out,” he ranks first.

It’s not a big sample for Pearce, but he’s had positive marks by the metrics any time he’s put on the glove.

His health is a question mark, sure. And his poor 2015 is a good reminder that his being good is no slam dunk. But he’s at least got a serviceable backup!

I, uh… I think first base will be OK…