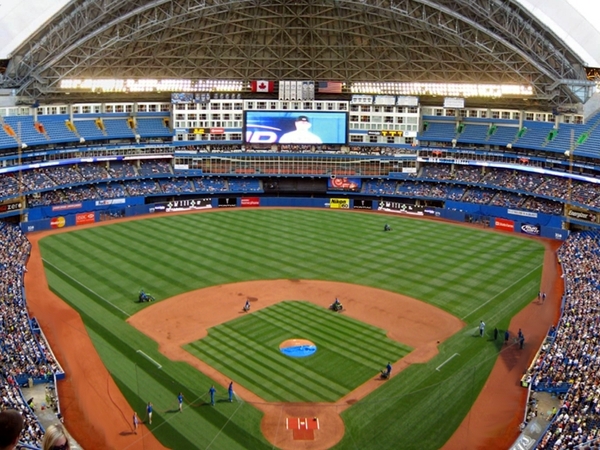 Image, as always, by the great @James_in_TO

When Paul Beeston started making noise about retrofitting the Rogers Centre to include a natural grass playing surface it seemed an awful lot like a distraction — something positive to get the outraged fans at a State of the Franchise event to look the other way and stop complaining about what they felt was a miserable off-season.

Five years later we’re still talking about it. Only now what was once an olive branch to fans has become a landmine for Beeston’s successor.

It’s unfortunate, because while it’s a stretch to say that Beeston was always full of shit on this issue, he definitely allowed fans to dream on something that was always going to extremely difficult and extremely costly to pull off. Not exactly impossible, but not quite so realistic as it was sold.

Mark Shapiro is decidedly less full of shit on this issue — but unfortunately for him, that means telling fans things that they don’t want to hear.

A reader — Stephen Dame, a former journalist, now a teacher and coach at Royal St. George’s college in Toronto — emailed me on Saturday morning to say that he’d taken a few notes from a Q&A session that Shapiro had just participated in at the 2017 Blue Jays Academy Coaches Clinic. One of the thing Shapiro spoke about was the fact that he, Ross Atkins, Tony LaCava, and John Gibbons had visited Coach Pop, R.C. Buford, and the rest of the Spurs’ front office this winter, basically just to see what they could learn.

Another thing was about the dream that is Rogers Centre grass.

According to Stephen, this was Shapiro’s reply to an audience member’s request for an update on the University of Guelph feasibility study and the potential for bringing grass to the Rogers Centre:

“We want to turn this stadium into a ballpark; that means we have to consider many renos that could be made. Texas is tearing down a stadium younger than this one, but we can’t do that. We have to make this place better. We could do anything, but it would cost a tonne of money to put grass in here.‎ We would have to see the cost and then weigh that against what it means we cannot do because we spent that money on grass.”

Stephen says that Shapiro explained that ‎drainage is biggest challenge, but not the only one. “The turf would need to be changed three times a year, the roof cannot be opened until May, both major challenges,” Shapiro said.

Shapiro didn’t mention the Guelph study or the results thereof, but did defend the turf that’s currently in place. “I heard so much about the turf when I first came here, but it’s only two years old and it plays very well. It plays true. I can tell you that the turf is not a factor in players coming here.”

I find that last statement somewhat dubious — though the turf certainly didn’t drive José Bautista away (though there were other obvious factors that brought him back to the Jays) — but the rest of it seems about right. And while nobody ever wants to see a massive company like Rogers shying away from cost, this is… it’s just… it’s going to cost them way too much to do this. We might have to let this dream die.

Back in September I noted that earlier in the summer I had spoken “to someone who isn’t involved in the project, but whose input on this subject I trust, and he suggested that part of the problem is a couple of big water mains that run under the stadium, and serve tens of thousands of people in the condos in the area. This is hardly my area of expertise, but the implication was that it would be either extremely costly to reroute those mains, or would require cutting service for an untenable length of time.”

This is just a theory, but this person felt that, ultimately, the Jays would end up back on the Exhibition Grounds, adjacent to BMO Field, in a baseball-only stadium. That wasn’t based on any inside information or any sort of plans going forward, and the timeline for such move to even be considered wasn’t close to imminent, but the Jays certainly can’t leave downtown, they can’t implode the Rogers Centre without ending up homeless for at least a season, and there simply isn’t that much real estate left in the area that makes sense. Plus, let’s be honest, you can get a whole lot of taxpayer money for a new stadium, which you probably can’t get if you’re just retrofitting the old one.

In that same piece from September, I noted that Shapiro had said the Jays hope to squeeze thirty more years out of their current facility. That won’t be possible — if it’s even remotely possible, which I doubt — without a whole lot of money poured into it to fix t up. And like Shapiro says, if they spend what it takes to give us a grass playing surface, it’s hard to imagine they have enough to do whatever else they think they need to keep the building viable for that long (or anywhere near it). Making sure the roof continues to function has to be high up on that list.

The idea of having to keep watching the team play on turf sucks, of course. But getting a somewhat straight answer on the grass situation at least doesn’t.

Beyond the Boxscore: Johnny Gaudreau comes up clutch as the Calgary Flames advance to Round 2

Monday Mailbag: Draft targets if the Canucks trade down, Rathbone on PP2, and #MustardSzN

Hellberg, Suter off to strong starts at the 2022 IIHF World Championship

Gamethread Playoffs Game 6 – way to early to do or die