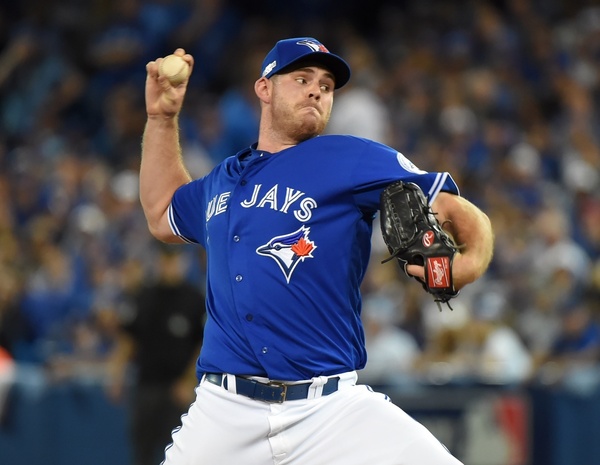 By now we’ve all wondered it. The big question hanging over the Jays’ breakout reliever of 2016 — a converted starter who found so much success in the bullpen. Joe Biagini. Is he or isn’t he? What do we think?

Ho ho ho. See what I did there?

The answer to that question is, of course, “no.” Or, if you’re not into the whole brevity thing, “Oh my god no, and please stop encouraging him.” (Similar answers to what you’d get if asking whether I’m funny or not. *COUGH*. Also, to be fair, I think Biagini comes off better in print than maybe on TV sometimes.)

The question of whether Biagini should be converted back to a starter or moved to the bullpen, on the other hand, isn’t so easily answered.

Today at BP Toronto, Matt Gwin does an outstanding job of looking at Biagini’s arsenal and arguing that the Blue Jays ought to explore what they’ve got here.

Matt’s piece isn’t quite as simple as that — he argues, perhaps surprisingly, in favour of the Jays’ relief depth options beyond Biagini, and rightly notes that it’s much harder to stretch a reliever out into a starter mid-season than it is to go the other way — but it’s the stuff about Biagini’s repertoire, and the way he started using it by the end of last season, that really jumps out at you.

“Biagini began the season throwing one of his fastball or curveball 94 percent of the time. However, by the time playoff baseball rolled around in October Biagini was mixing between four pitches on a fairly consistent basis: fastball, changeup, curveball, slider. That’s a starter’s repertoire,” he writes.

Put those all together and you have a very interesting starting pitcher. I want to believe! And I think Matt, and the Jays, are completely correct in wanting to see where this goes — even if it means starting Biagini at Buffalo and taking some time to see how best he fits the needs of the big club, rather than feeling they have to decide right away. I suggested something a lot like this for Aaron Sanchez this time last year, which, in retrospect,… uh… wasn’t exactly my finest moment.

Maybe I’ll be wrong again here, but as far as Biagini the starter goes, personally, I’ve mostly been skeptical. And my reasoning is fairly simple.

Spencer Bignol of Beyond the Box Score noted last August, as he declared Biagini the best Rule Five pickup of the year, that when originally selected, Ross Atkins explained the club’s plan for him thusly: “We’ll shorten up, put him in shorter stints and see if there’s a little bit of upside to his stuff.”

Josh Norris of Baseball America gave this scouting report on him after the Rule Five draft: “Savvy righthander doesn’t possess a plus pitch, but average arsenal and pitchability makes stuff tick up.”

And John Sickels of Minor League Ball wrote last April that, prior to joining the Jays, Biagini was “hitting 90-95 with the heater.” If we look at his 2016 velocity chart at FanGraphs, we see that pitching in relief meant he was firmly in the upper part of that range, and sometimes above it.

Is he capable of having the same kind of success if he’s pitching down a couple ticks, or more? He certainly wasn’t in Double-A, where he struck out just 84 batters in 130.1 innings in 2015, compared to 62 Ks in 67.2 innings for the Jays last year.

The caveat to that, though, is something Matt points out in his piece: the development of Biagini’s slider.

“At this stage Biagini is a generic mop-up/middle reliever. He’ll need a better breaking ball to move beyond that,” Sickels added. “He’s been working on a cutter/slider to compliment his other offerings. The key thing to watch for would be any spike in his strikeout rate.”

Well the strikeouts certainly did spike. And we can’t say that it’s just the uptick in velocity. “The slider is one of Joe Biagini’s two big out pitches, but with a whiff rate of 23 percent, it’s definitely the more effective of the two,” Gwin writes.

Now, part of the effectiveness of Biagini’s slider has been how hard he throws it — it’s the seventh highest velocity slider of the PITCHf/x era — and that, too, may change when not working in short stints, but this still suggests that there’s maybe a little more substance behind Biagini’s being stretched out than much of the conversation about it has acknowledged.

I’m as guilty of that as anybody. It’s been my assumption all winter that the stuff played up in the bullpen, and so the conversion back to starting would likely undo much of the positive we saw last year. Clearly there’s more to it than that, and maybe that view is just as overly simplistic as the assumption that his relief success will easily carry over to the rotation.

OK, you got me. I’m intrigued.

Quinn Hughes is expected to throw fewer hits than any defenceman in the league next season, and that’s a good thing