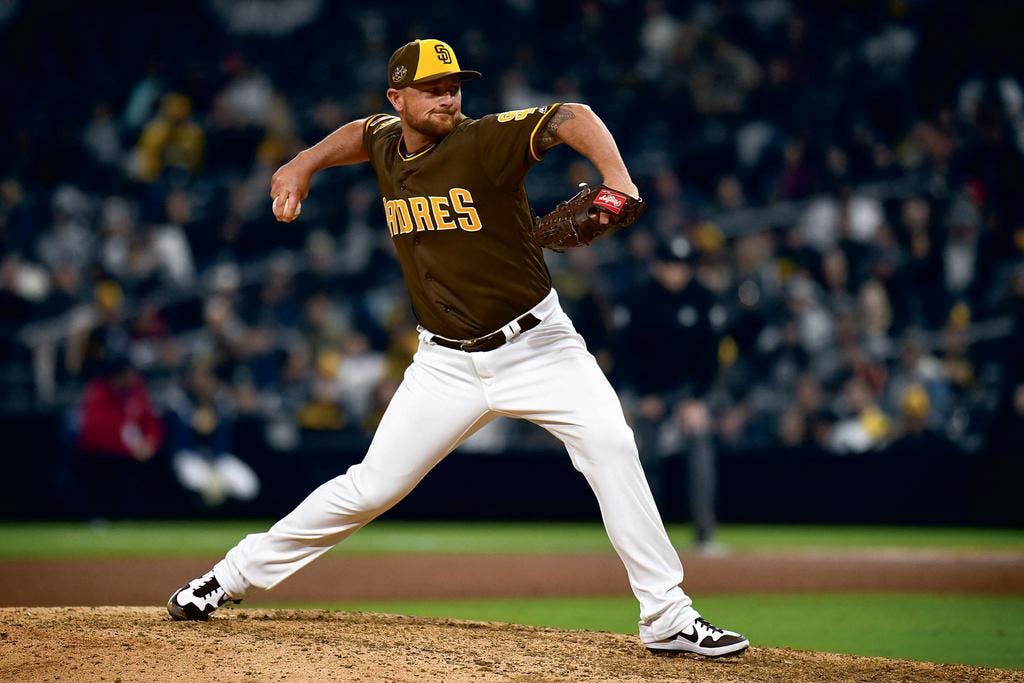 By Paul Berthelot
2 years ago
The Blue Jays have agreed to a deal with Kirby Yates. At this time the details of the deal are not yet known, but this signing is a significant one for the Blue Jays as it addresses one of their bigger weaknesses, the back end of the bullpen.
The Blue Jays under Mark Shapiro and Ross Atkins have done well at cobbling together an effective bullpen year after year. Players like Joe Smith, Seung-hwan Oh, Tyler Clippard, Daniel Hudson, David Phelps, A.J. Cole, and Anthony Bass were brought in on the cheap and pitched very well for the team. With the volatility of relievers’ year over year, this is a real strength of the front office.
It’s a luxury to go after these types of bullpen arms knowing you have already have an elite closer as the Blue Jays once had in Ken Giles. It takes a lot of pressure off the entire bullpen knowing you have a stud like Giles down there to close games out. It eases expectations on the other pitchers and gives them a better chance to succeed.
With Giles a free agent (and out for the season with Tommy John) the Blue Jays needed another arm to be that showstopper at the back of the bullpen. The Blue Jays were never going to pay the price for Liam Hendricks, so they found an alternative in Yates and hope that he can be that shutdown arm to close out games.
Per Fangraphs Depth Charts the Blue Jays bullpen is projected for 1.8 WAR, ranking 20th in the league. They have a couple good arms, Jordan Romano, Rafael Dolis, but no one who you would really be comfortable with as that true lockdown closer. Adding Tyler Chatwood yesterday, and now Yates, will help push the pen towards the top half of the league.
Health is the only question mark. Yates threw just 4.1 innings last season before needing surgery to remove bone chips in his elbow.
When Yates was last healthy in 2019 there was no one better. Yates led all relievers (min. 30 innings) with a 1.19 ERA, a 1.30 FIP, and finished second with a 2.25 xFIP. His 3.4 WAR was second only to the 3.8 WAR Liam Hendricks put up, though Yates threw 22.1 fewer innings. His strikeout rate of 41.6% ranked fourth behind, Josh Hader, Austin Adams and Nick Anderson, and he was one of just nine relievers (including Giles) to have a K-BB% of at least 30%. In other words dominant.
Had that been his free agent year, Yates would have been looking for a similar deal to what Hendricks just received.
Yates’ success comes from his splitter which he developed after arriving in San Diego in 2017. You could describe it as gorgeous.
That splitter drops 37.6 inches, which is 3.9 inches more than comparable splitters.  Only three pitchers had more drop on their splitters compared to average than Yates did. The pitch looks like it’s going to be a strike before falling right off the table. Batters have a hard time laying off the pitch. Batters swung at the splitter just over 50% of the time in 2019, and either swung and missed which they did 17.5% of the time or if they made contact it was on the ground at a rate of 66.7%.
You put all that together and you get a pitch that batters hit just .153 on, struck out 40.2% of the time and had a run value of -16, per Baseball Savant. The splitter tunnels well with his fastball, making it very difficult for hitters.
Yates’ fastball isn’t the typical 98-100 heater you see from most dominate relievers. Yates averages just over 93 mph and tops out at 95 mph. He locates the fastball well, both up in the zone when he needs a strikeout like in the gif above or down in the zone disguising his splitter. The fastball has good horizontal movement, moving 14.2 inches or 5.5 inches more than comparable fastballs. This helps keep the ball away from the barrel of the hitter and generate all those whiffs.
Yates if healthy can be a major addition to the Blue Jays roster. That is a big if though. Yates isn’t a big power arm so even if he loses some velocity the hope would be that he could still be effective. The big concern is the feel for his splitter. The Blue Jays are taking a chance that he hasn’t lost anything from the splitter and he can regain the form that made him one of the best relievers in the game.
Uncategorized
Recent articles from Paul Berthelot