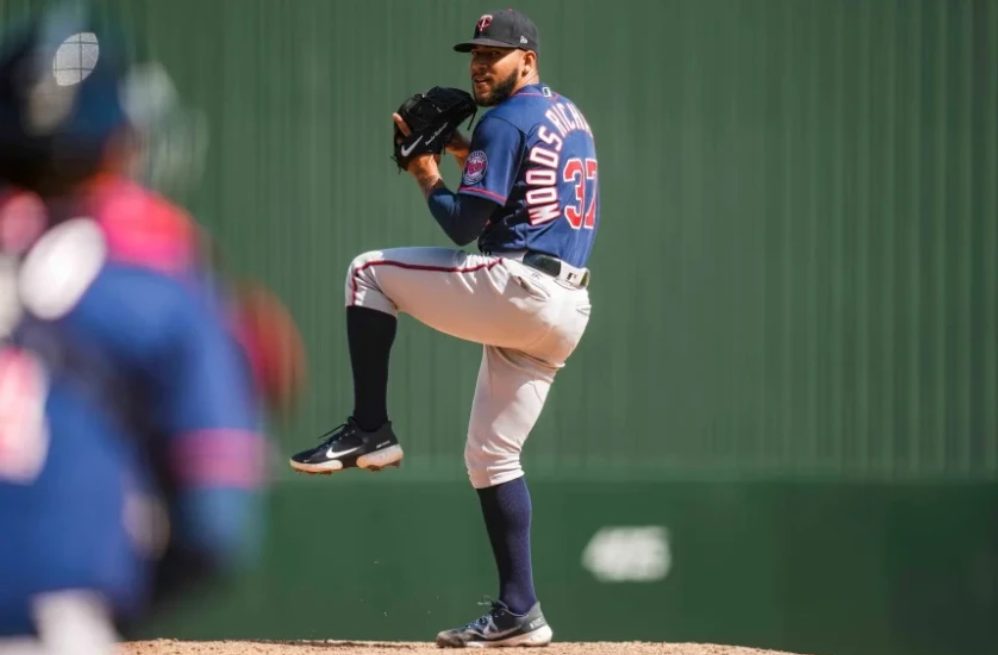 By Brennan Delaney
3 months ago
We here at Blue Jays Nation love it when former Blue Jays prospects make their MLB debut. Today, it was Simeon Woods Richardson’s turn.
The former Blue Jays prospect made his MLB debut five days after he turned 22 years old. Woods Richardson posted a line of 5 IP, 3 H, 2 ER, 2 BB 3 K. This was likely his last start, so he finished with a 3.60 ERA.
After an insanely unlucky first inning (in which he was evidently nervous), he dialed it in, only allowing a homer and a walk.
The Blue Jays originally acquired Simeon Woods Richardson (and Anthony Kay) when they sent homegrown #2 Marcus Stroman to the New York Mets in 2019. Woods Richardson spent three seasons with the Blue Jays. In the 2019 season, he posted a 2.54 ERA and 2.46 FIP in 28.1 innings pitched with the Dunedin Blue Jays (High A at the time).
He struggled with the Double A Fisher Cats in 2021, posting a 5.76 ERA and 3.78 FIP in 45.1 innings pitched. While his 33.2 K% was excellent, his 12.9 BB% was a massive increase from prior years. However, he was only 20 years old in Double A, so there was at least one cause. Other causes include potentially being injured, or the Olympics ruining his rhythm.
Either way, the Jays sent the former 93rd-ranked prospect and Austin Martin (16th ranked prospect at the time) to the Minnesota Twins for Jose Berrios.
The young righty found his game in the Twins organization. He posted a 3.06 ERA and 3.55 FIP in 70.2 innings pitched with Minnesota’s Double A team. He also had a 26.8 K% and dropped his BB% to 9.1%.
He was promoted to Triple A, posting an even better 2.21 ERA and 2.96 FIP in his 36.2 innings pitched. Woods Richardson’s K% increased to 27.3%, while his BB% dropped to 7.2%.
With the Twins out of the playoffs, and Woods Richardson being Rule 5 eligible at the end of the season, they decided to let him start in the last turn of the rotation.
He’s a promising young pitcher, who has great stuff and could be a long-time starter in the bigs. We wish nothing but the best for the man they call SWR.

Former Blue Jay Max Castillo didn’t have as much luck with the Royals on Sunday. He had a line of 5 IP, 8 H, 7 ER, 2 BB, 5 K, and 2 HR. This brings his season ERA to 5.95 and his season FIP to 5.18 in 39.1 innings pitched. Hopefully, it’s just a minor blip in an otherwise lengthy career. He and Samad Taylor were moved to the Kansas City Royals in exchange for Whit Merrifield.
Jordan Groshans is slashing .265/.308/.327 with a homer in 52 plate appearances with the Miami Marlins. His BB% sits at 5.8%, while his K% is at 21.2%. He currently has a 0.3 fWAR and has a 1 Defensive Runs Saved and a 2 Outs Above Average at third base. He was the prospect that was moved for Zach Pop, Anthony Bass and prospect Edward Duran.
Hopefully, all three of these guys can continue to do well in their major league careers!
As always, you can follow me on Twitter @Brennan_L_D