Advertisement
Ad
Hyun Jin Ryu’s injury, why his contract was worthwhile, and the Blue Jays’ need for another starting pitcher 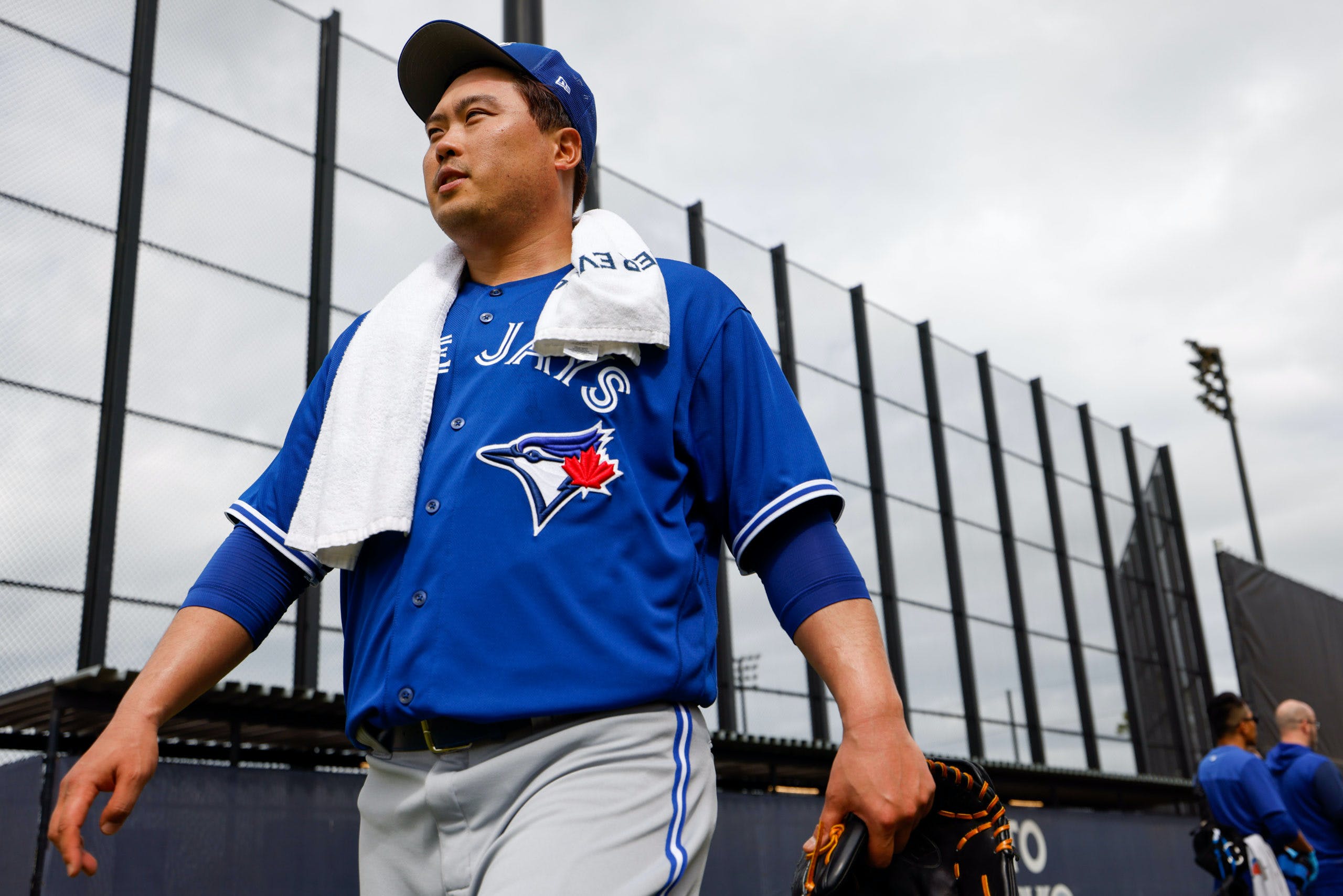 Photo credit: Nathan Ray Seebeck-USA TODAY Sports
By Cam Lewis
7 months ago
Comments
Hyun Jin Ryu might have made his last start as a Blue Jay.
Scott Mitchell of TSN reported on Tuesday that Ryu, who’s currently on the 15-day Injured List, will undergo surgery on his elbow. They aren’t sure yet if it’ll be a full Tommy John surgery, so the most optimistic timeline would have Ryu pitching in 9-12 months, but, regardless, he’s done for this season.
If Ryu doesn’t require Tommy John, there’s certainly a chance he could make a comeback at some point next season. But still, the prudent move for the Blue Jays, a team in a win-now contention window, would be to carry on and plan as though Ryu isn’t going to be back for the final year of the four-year contract he signed back in December of 2019.
It would be an unfortunate end to what started out as a great career for a very lovable Blue Jay, and it’s unfortunate that Ryu might wind up mostly being remembered for the games he didn’t pitch as opposed to the ones he did.
Advertisement
Ad
Advertisement
Ad
Even though they’re going to wind up having Ryu on the shelf for nearly half of the contract, the deal was still a worthwhile one to make because it signaled to everyone — fans, players, agents, and other teams — that the Blue Jays were ready to compete.
The team took a massive step going from a 67-95 record in 2019 to making the expanded playoffs in the COVID-shortened 2020 season, and that certainly wouldn’t have happened without Ryu pitching like he did that summer. Ryu posted a 2.69 ERA in 2020 and the Blue Jays won nine of the 12 games he started, and he finished third in American League CY Young voting and even received some love in the Most Valuable Player discussion.
There was always worry about Ryu’s durability, as he missed a significant amount of time when he was pitching for the Los Angeles Dodgers, but that’s the reality when looking for starting pitchers in free agency. When looking at the other contracts signed by starting pitchers that winter, Ryu is far from a disaster.
Advertisement
Ad
Advertisement
Ad
Stephen Strasburg signed a seven-year, $245 million contract and has only made eight starts since. The Arizona Diamondbacks gave Madison Bumgarner $85 million over five years and he has a 4.67 ERA with the team. Even Gerrit Cole’s nine-year, $324 million contract looks fairly worrisome three years in.
The reality with Ryu is that the Blue Jays took a gamble on a very good pitcher with some durability issues and they didn’t get full value out of the contract. But still, they got enough out of Ryu that the deal was certainly worthwhile. Without him, they don’t take that step forward in 2020 and they might not lure George Springer and Marcus Semien to Toronto the following off-season.

Hyun Jin Ryu's arrival literally and figuratively thrust the Blue Jays into a new era of contention. He pitched his ass off in 2020 and continued to compete even as his stuff waned and his body gave out. In his 49 starts for Toronto, the Blue Jays went 32-17. Ryu Forever.

So, what now?
The Blue Jays are operating with a starting rotation of Jose Berrios, Kevin Gausman, Alek Manoah, Ross Stripling, and Yusei Kikuchi. The next arm in line to start in the event of an injury would probably be Casey Lawrence, Thomas Hatch, or Bowden Francis, all of whom are pitching for the Triple-A Bisons and are on the 40-man roster.
Advertisement
Ad
Advertisement
Ad
Lawrence appears to be the best of the bunch right now, as he has a sparkling 1.77 ERA across 10 starts for the Bisons, but a 34-year-old journeyman with two starts at the big league level wouldn’t be an ideal sixth guy heading down the stretch for a contending team.
The other name in this mix is Nate Pearson, who’s still slowly making his way back from a battle with mono. Pearson has made three appearances for the Bisons this season, all of them have been two innings long and all of them have been spaced six days apart. It seems the Blue Jays are slowly building Pearson up to be a starter but banking on him being an effective one in the Majors would obviously be a gamble.
Outside of Kikuchi, who put up another bad start on Tuesday night, things are rolling along nicely for the Blue Jays when it comes to their starting rotation, so adding another one doesn’t seem like a pressing need right now. But the depth is quite thin and Kikuchi’s performances are troubling, so acquiring a veteran starting pitcher should be towards the top of the front office’s list as the trade deadline approaches.
Advertisement
Ad
Advertisement
Ad

Ross Atkins says with Ryu’s loss Blue Jays will “consider deadline opportunities and trade acquisitions that could bolster our depth.”

As for type pitcher they’d search for, Bkue Jays “do have some some flexibility there to think about it in a creative way.” https://t.co/HePWc4hAJy

In 2020, the Blue Jays added to their pitching depth at the deadline by acquiring Taijuan Walker, Robbie Ray, and Ross Stripling. The following summer, they made a deadline splash for Jose Berrios after adding Adam Cimber and Trevor Richards to round out the bullpen in June.
There’s about a month left of test trial runway for the Blue Jays to see what they’ve got and then it’s officially trading season.
We’ll surely see the Blue Jays add another arm or two or three this summer, and whether that needs to be a starter will come down to whether Kikuchi can sort things out, whether Stripling can continue to pitch well in Ryu’s spot, and whether Pearson can come up and be a difference-maker.