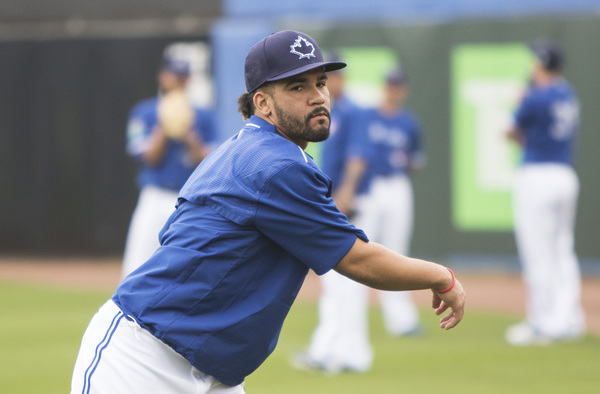 It has been a long, tough road, but Saturday was a very good day for Devon Travis.

Travis said it better: “It was fricking sick.”

“My first time on the field with cleats on and pants on and living a baseball life,” he said.

Not that he has been working out on a beach somewhere, buck naked. He meant baseball pants instead of workout shorts and real baseball shoes instead of the runners he has been wearing during his rehab from a very tricky surgery on his left shoulder in November.

That surgery, his second on that shoulder in four months, corrected a rare condition that required surgeons to fuse two bones that normally fuse by themselves by early adulthood. It took a long time for the medics to figure out why Travis was feeling severe pain, even after they did a routine “cleanout” of the shoulder in August.

So the American League’s rookie of the month last April ended up missing more than four months of a landmark season for the Blue Jays. He morphed from an integral part of the club to a lost soul as Ryan Goins took over – and excelled – at Travis’s old job.

He hit eight homers, the last coming on July 28. In his next at bat, he struck out, grimaced in pain and was unable to play again the rest of the way.

There remains no precise timetable for his return. Someone mentioned four to six weeks. “I hope so,” he said.

When he came off the field Saturday, he got a big hug from Nikki Huffman, the Jays’ new physical therapist, known for her work last summer on Marcus Stroman’s rehab at Duke University.

“I wouldn’t be this far without her right now,” Travis said. “I definitely am so thankful for her.”

Now the priority is to build up his overall body strength and gradually add more baseball activity. He is, in essence, starting spring training just as a new season is about to begin.

But he has reached the point where he no longer worries about the shoulder.

“Just doing little things in the weight room helped me get my confidence,” he said. “I know that once you step on that field and it’s go time, you can’t worry about anything. This game’s hard enough. I’m not worried about any pain.”

What happened to him? – Nik Antropov