The Blue Jays’ offence hasn’t been itself so far this season. The bats that would club their way to double-digit victories last season with ease currently rank seventh in the American League in runs scored per game, thanks largely to a whopping, league-leading 124 strikeouts. This has been evident in the past couple of games in Boston, as Rick Porcello, David Price, and the Red Sox bullpen has held the Jays to a paltry five runs while also striking them out 24 times.

It’s only been twelve games, so in no way is this performance indicative of some kind of massive regression in which this group is suddenly just average offensively or something, but it’s been bad enough that Gibby has decided to make a change. Kevin Pillar is out as leadoff hitter, and for now, Michael Saunders is in.

Like I said before, yesterday was another ugly offensive showing. I don’t think this was unexpected, considering the very talented and historically Jays dominating David Price was on the mound for Boston, but the former Blue Jay was looking very hittable early on.

Josh Donaldson and Jose Bautista each smacked doubles off of Price in the first inning to grab a quick lead, and Edwin Encarnacion also hit a double of his own in the fourth to score Bautista for the team’s second run of the game, but unfortunately, nobody else in the Jays lineup was able to figure him out. Price went seven strong innings, allowing just two runs on six hits and no walks, while striking out nine.

Marco Estrada pitched a good game, save for a difficult third inning where the wheels fell of after he was drilled in the leg by a Jackie Bradley comebacker. I don’t actually have any intel on this, but I swear whenever I see a pitcher get drilled by a ball (especially if it’s the first batter), they go on to have a rough inning. It happened last week at the Home Opener too with Joe Kelly. He was hit by a comebacker in the leg a few batters before John Donaldson hammered that grand slam (I won’t embrace papa slam).

Anyways, Marco allowed four runs in that ugly third inning, but he was pretty much perfect otherwise, save for scattering a few hits and walks. He ended up going six full innings, allowing four runs on eight hits and one walk, collecting three strikeouts.

The big news coming into today is that Kevin Pillar’s time as the leadoff hitter has come to an end. It’s only been twelve games, but man, it feels like this went on for too long. It really shouldn’t have been a thing in the first place considering Pillar has a pretty terrible plate approach and doesn’t get on base at a high enough clip to be of value batting before Josh, Jose, and Edwin, but for whatever reason, they kept trying to make it a thing.

I’m not sure if Saunders is the answer, I personally would prefer Tulo or Russell Martin, ya know, somebody who can take a few pitches, and maybe even a walk, but anybody is an upgrade over Pillar at this point. Anyways, Pillar will be batting eighth in the order, which is a much better fit for him. Down there, pretty much everything is a bonus, and stealing bases actually has some value, because you can afford to take a gamble to get into scoring position for Darwin Barney, but when Jose Bautista is up, maybe not so much.

2B Devon Travis (shoulder) to take live BP on field off coach for first time Monday. #BlueJays still plan to bring him along slowly

Also, Devon Travis is about to take a big step on his road to recovery. I’m sure we’re still a long ways away from seeing him on the Jays again, but if he can get back to where he was over the first couple months of 2015, this whole leadoff hitter situation would be solved. That’s pretty idealistic, of course, and there a lot of things getting in the way of that, but hopefully he’s back in action sooner rather than later.

Moving away from good news and into bad news, Ken Rosenthal said that the Jays are likely to lose Jose Bautista and Edwin Encarnacion this offseason, as the team is already loaded with expensive players over the age of 30. This analysis really isn’t anything new, and he doesn’t actually have any intel saying that the Jays are for sure letting their two sluggers go, but here it is anyway.

Aaron Sanchez will get the ball for the Jays, seeking his first win of the season despite tossing gems in his first two starts against the Devil Rays and Yankees. On the other side, the Jays will face Steven Wright for the second Sunday in a row. Last week, the knuckleballer pitched well, but came out on the wrong side of a 3-0 loss thanks to Marco Estrada’s dominant season debut.

I’ve already touched on it a lot… But my goodness, let’s get the offence going. I thought the first couple months of last season were frustrating, where the Jays were pounding runs all over the place but still managed to find ways to lose thanks to horrible pitching, but this is much more painful. The pitching, overall, has been good, but the bats are nowhere to be found.

Please have one of those offensive explosions at Fenway that we all love so much. Please Michael Saunders, be the difference maker! 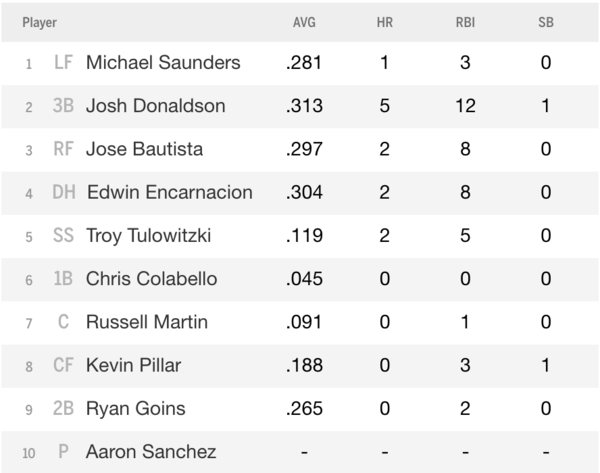 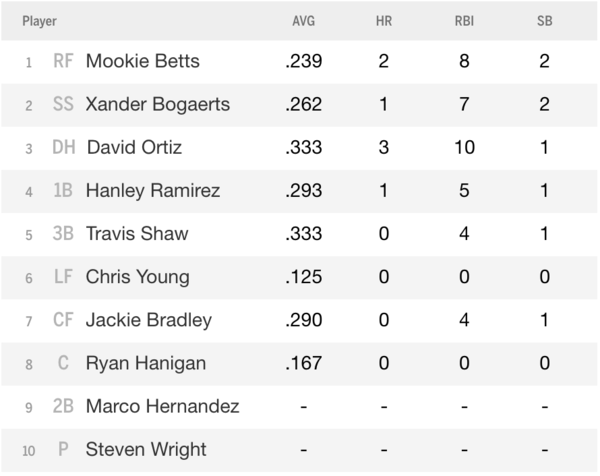